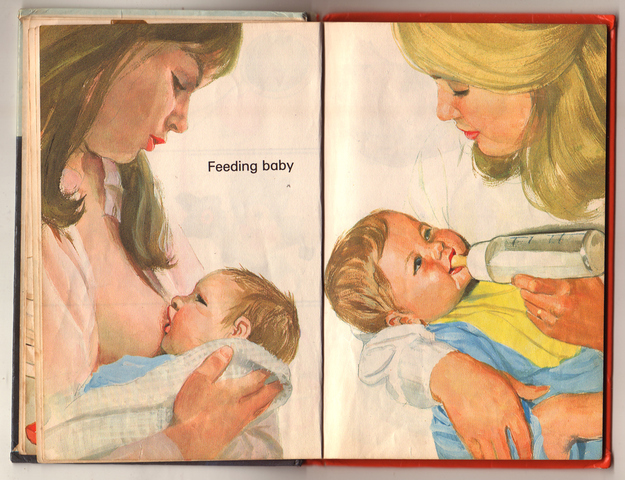 From ‘Talkabout Baby’ by Ladybird Books, via sianuska.blogspot.com

THE TRUTH ABOUT FORMULA MARKETING

**Also check out Part One (Why Isn’t Every Baby Breastfed?) and Part Two (Cow-Made, Man-Made, or Mother-Made?) of this series.**

The Truth About Formula Marketing

Formula companies literally spend billions of dollars every year on marketing, which means it’s a really, really, really ingenious kind of marketing. If you don’t think their advertising practices are ‘so bad,’ that’s because they worked — they are, in fact, so good.

Many women, perhaps especially those who wished to breastfeed, are lured by clever marketing to wrap their hands around a container of powdered goods. Formula companies like to boast the new and improved versions of their products, which are now “Closer Than Ever” to breast milk.

Truth is, even modern formulas are still hundreds of ingredients shy of matching the components of breast milk, so even a newly added ingredient doesn’t achieve measurably closer status to breast milk. Improved, yes, but similar to breast milk, no.

Then beyond the contents of the containers, of course there’s the packaging itself. Bottles will never be breasts.

WHAT FORMULA COMPANIES WANT YOU TO BELIEVE

Formula companies want you to believe that formula is ‘basically the same’ as breast milk. They’ve made a real craft of equating their products to breast milk and using the advantages of breastfeeding to serve as foundation for their own campaigns. Breastfeeding has no appropriate place in formula marketing except to remind that ‘breast is normal’ although formula ads do use ‘breast is best’ to their advantage (with attempts to demonstrate how the artificial product is really, kinda, pretty much almost-best).

One study asked people whether they agreed that breast milk offered many health benefits to babies — most answered yes. Then the same people who agreed with that statement were asked whether they believed formula feeding carried health risks — most said no. So, ‘breast is best,’ but formula isn’t bad. You see, it doesn’t hurt formula companies to declare ‘breast is best’ just like everyone else. This is a trick.

Watch how this kind of language has permeated and changed our culture:

Formula companies want you to believe that advertising is necessary because formula is in fact essential for babies who wouldn’t survive without it. Discussing formula and educating about formula (necessary) are NOT the same as advertising formula with ads and sales pitches (unnecessary).

Formula companies want you to speak the language written by formula culture. What does this language sound like? You’ll recognize it in Diane Wiessinger’s excellent article “Watch Your Language!” (reprinted from the Journal of Human Lactation, Vol. 12, No. 1, 1996).

They want you to believe that free formula samples are harmless and even, by nature, helpful. That a desire to breastfeed exclusively is selfish. That breastfeeding is frumpy and formula is modern. That formula-feeding is easier. More convenient. Less painful. Cheap, even (did I mention the free samples?).

Does it seem like an exhausting amount of convincing just to get you to buy a product that’s apparently great as is?

CAN YOU SUPPORT FORMULA-FEEDERS AND FIGHT FORMULA MARKETING?

Wait, isn’t it a bit offensive to attack formula marketing when so many parents we know and love are regular customers? Is it even possible to support formula-feeding families while attempting to muzzle the corporate giants that fill their baby bottles?

Yes, it is possible — you can read all about it in this article by Best for Babes that explains the bigger picture that some people are missing. Refusing support for formula marketing is not about restricting discussion about formula feeding or formula use for those who wish or need to have conversations about it.

Okay, true, so consumerism culture is sort of rotting our morals, but aren’t we all kinda ‘used to it’ by now? Why the overwhelming backlash against formula advertisements? Doesn’t it seem a bit overreactive and maybe even a bit unfair?

No, not according to thousands of mothers who are sick of being preyed upon for the contents of their wallets at the expense of their children (breastfeeders and formula-feeders alike), and not according to the World Health Organization, that which was so worried about the dangerous effects of formula marketing on global health outcomes that it instated the International Code of Marketing of Breast-Milk Substitutes in 1981.

This Code prohibits the promotion of formula and milk substitutes in hospitals and related facilities, no free samples/supplies, no gifts to health care workers, no words/images idealizing artificial feeding, all labels should explicitly inform about the risks of formula-feeding (some feel it’s akin to the skull-and-crossbones sticker on cigarettes — though BookishMama opines here about why this is a crappy comparison), and more stipulations. The United States is one country that remains exempt from this code, which is why this type of marketing is perfectly legal stateside.

The formula ‘goodie bags’ widely distributed in hospitals as take-home ‘gifts’ to new mothers are evidentially proven to hurt many of those who want to breastfeed.  Did you know that the nation’s top-ranked hospitals now ban these bags and other forms of infant formula promotion? The rest, however, are still accepting and supplying these bags, which typically include information about formulas’ nutritive aspects, cute little freebies, breastfeeding ‘support’ in the form of supplements and helplines directed to a company that sells formula, formula coupons and huge discounts, free bottles and bottle nipples, free pacifiers, you name it!

After I gave birth to my son, I received a “Congratulations on your birth! Here’s Your Breastfeeding Support” bag set up with everything mentioned above, organized and positioned just-so the most heart-wrenching labels would appear at my eye level first upon opening: “Be sure you’re giving your baby the best start.” (Did an insane Christmas elf wrap these?!) Plus two huge, free containers of formula that seemed like enough to feed my newborn for two full weeks. And it didn’t stop there — I continued to receive formula samples and free logo-stamped bottles in the mail at my private residence for several weeks afterward. As a first-time mother new to breastfeeding this felt extremely violating, especially after confirming that I would be opting out of this type of mail at home. I said I was breastfeeding, so leave me alone and let me breastfeed!

It sounds like it’d be easy enough to ignore, right? But new moms, man… we’re desperate. We usually don’t know what the hell we’re doing, we’ve never known sleep deprivation quite like this, and many mothers’ minds keep jogging back to that innocent-looking formula ad that promised better sleep if only they could convince daddy to slip a formula bottle at the 3 a.m. feeding.

Thankfully, I knew better. At the time, I was too busy to do anything but laugh or ignore the unsolicited mailbox overflow. Not everyone is so lucky.

How Breastfed Babies Are Harmed: 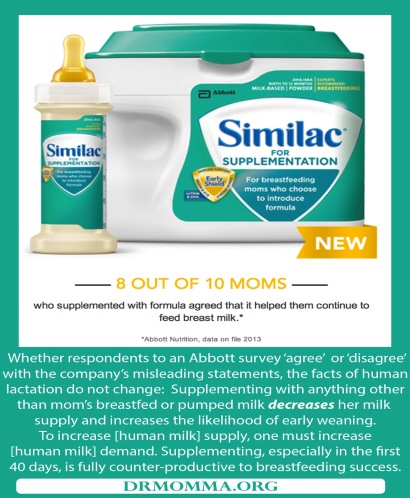 How Formula-Fed Babies Are Harmed:

So, we know exclusively breastfed babies can benefit from the absence of formula marketing. But how are the families who need (or at their own behest choose) to use formula also hurt by unrestricted formula campaigns?

Is breastfeeding marketing just as bad?

Sometimes, it certainly has been! Read about it in my post on gross breastfeeding marketing tactics.

Breasts and the women who possess them are not products to sell, and formula is not a product to carelessly prepare and consume without knowing the risks and benefits of specific types for specific babies. Infant feeding should be ‘promoted’ through knowledge and support within our communities before we open a magazine or a new internet tab.

Let’s not cheapen our children’s nutrition, no matter where it comes from, by plastering its image alongside Tylenol, Kleenex, and Capri Sun ads with the implication that we as mothers cannot think for ourselves — whether we feed formula, breast milk, or both.