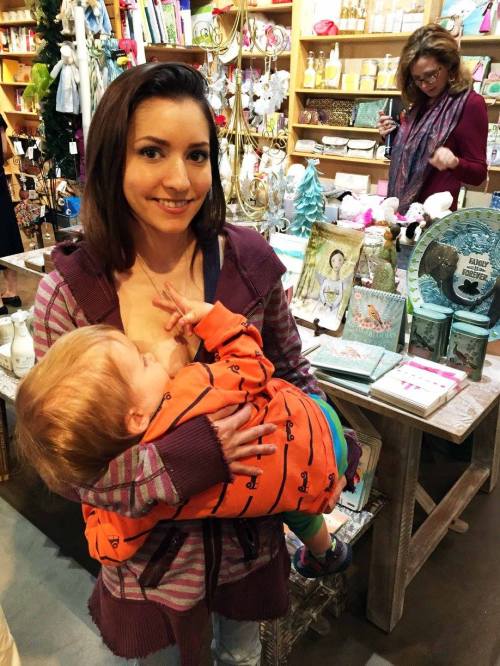 I hear it all the time — women defending themselves for breastfeeding in public. Adamant that they deserve to feed their babies whenever and wherever needed, they say: “It’s not like you could see anything! Nothing was even showing!”

Great, but if you could see ‘something’… or if it had been ‘showing’… so what? Is it truly a valid defense for nursing a child in non-private situations?

I don’t need to defend myself if a flash of nipple shows, or if my areolas were large enough to be visible throughout an entire feeding.

When breastfeeding, my body doesn’t start being indiscreet the moment another person decides it is so.

My breasts are mine. They are not for anyone who gazes upon them, they aren’t the property of my partner bought by a vow, they aren’t even my child’s — he who was vitally connected to them for a full year for all of his sustenance.

How did we get this idea that breasts (really any body part) will become public property just because some portion is VISIBLE?

I wrote about this a bit in an earlier post. To avoid redundancy on the same points, here it is:

“If You Never See Breastfeeding”

So now, I will share a story that has a good ending. We might often feel like we need to excuse ourselves for accidental or purposeful exposure of our maternal bodies functioning as they do in their normal, healthy, love-giving state for fear it will offend or threaten those who don’t understand (as if it’s our responsibility to alter our norm for them!). This story proves that, thankfully, there are plenty of understanding and even especially helpful people in the world.

A year ago, I was shopping in World Market. It was a bit dangerously close to nap time, and two-year-old MaiTai was on the verge of upset. By the time we rounded aisle two, he was in back-arching, full-on waterworks meltdown mode. Even people in the back of the store were staring. It was bad.

I knew I had to get him home as quickly as possible, but I still wanted to purchase my items. I would have to calm him for at least the amount of time it’d take to go through the line and check-out, so after trying to bounce him in his Ergo carrier, offering a soft shhhh, singing an off-pitch kiddie song (which of course made him bawl harder), I finally did what always works. I pulled down the left side of my shirt and sports bra and let him do whatever he wanted with what’s under there.

He immediately latched on, and just as soon met calm and peace. He fell perfectly quiet, and so our store-wide audience returned to their own respective business.

With my now-content child nursing away in his carrier, there was no more to ‘see’ than when he’d been sitting inactive in it moments before. So when we got to the cashier, I put my items on the counter, she scanned them, I flipped through my phone to find my online coupon, all of that. The cashier said nothing in regard to my son as he nursed. What was there to say, after all?

Then, as I reached across him to slide my credit card and confirm the seemingly zillion prompts on the screen, MaiTai unlatched to get a peek at the curious commotion I made with all the button-pressing (Ooohh, buttons!). In that moment, my breast was just… out.

I knew MaiTai would re-latch in probably another second, so I didn’t bother to pull up my shirt right then. Did I feel like putting him in the position of screaming and myself in one to pull down my shirt again half a second later? No.

So he glanced at the credit card machine and realized it wasn’t as interesting as his milkies. He cried for them again. But of course, he didn’t want the one that was already out waiting for him, no! He very clearly wanted the other one (I got one clue as he smacked the covered right side with his surprisingly strong baby hands).

And that’s when the cashier said something.

She looked at my crying little boy, his head freshly removed from my breast, and she said so sweetly, “Don’t worry, child! You’ll get more soon. Mommy’s almost done!”

I was almost done with the payment, and trying hard to finish my scribbly non-signature and get out of the way of the line so a horde of other customers could get checked out (the machine was sooooo slow!).

The cashier’s reaction of talking to my son in a reassuring voice when I was obviously a bit caught up in my multi-tasking was so helpful. I don’t even think she knew. (Did she know? Maybe she was a mom, too). Focused on her attention toward him, MaiTai was able to chill out long enough for me to cover up my left side and for us to finish gathering our things and clear the line. Then I gave him the other breast and we further averted a repeat meltdown on our voyage across the parking lot to our car.

The cashier hadn’t remarked about my accidentally, fully exposed breast. I mean, it was right in her face, albeit briefly, but she didn’t get all weird. In that moment I realized not all people require an apology for seeing breastfeeding (or breasts with babies). Instead of just looking away, ignoring my son’s state of upset, or pretending that I could be totally capable of doing several things at once in that moment, she was immediately at my aid. She looked right at my son, right at my breast, and she let him know that everything would be okay. Which let me know that everything would be okay.

It was a perfectly decent exposure. And hey, it happens.