Would you try this?

According to this article by PATH (the NIFTY cup designer) “several million babies born each year in Africa and South Asia can’t breastfeed due to prematurity or craniofacial anomalies like cleft lip or palate.”

A leader of the NIFTY cup project, Trish Colley, who is an expert in neonatal health technologies explained:

“Infants who are preterm can have problems sucking. Their sucking reflex has not developed enough for them to be able to breastfeed successfully. The NIFTY cup allows them to drink breast milk at a pace and flow that each individual infant establishes. This occurs because of the unique reservoir and flow channels that let infants lap the milk rather than have it poured down their throats.”

But is a cup a realistic or even beneficial tool for getting normal, healthy young infants fed?

From the science-based “Global Strategy for Infant and Young Child Feeding” (emphasis mine):

“The vast majority of mothers can and should breastfeed, just as the vast majority of infants can and should be breastfed. Only under exceptional circumstances can a mother’s milk be considered unsuitable for her infant. For those few health situations where infants cannot, or should not, be breastfed, the choice of the best alternative – [which are] expressed breast milk from an infant’s own mother, breast milk from a healthy wet-nurse or a human-milk bank, or a breast-milk substitute fed with a cup, which is a safer method than a feeding bottle and teat – depends on individual circumstances.”

Alternative feeding methods are used to avoid nipple confusion for a baby who is trying to establish breastfeeding and can help preserve a mother’s milk supply, whereas using bottles may interfere.

Studies have shown that cup feeding is safer than bottle feeding for premature infants. Other studies also show that babies who are initially cup-fed are more likely than bottle-fed babies to exclusively breastfeed by three months post-hospital discharge, yet they tend to stay in the hospital longer.

This great informational by KellyMom elaborates on appropriate alternative methods that can be used for younger/preemie babies as well as the best ones for older babies. A Supplemental Nursing System (SNS) or lactation aid is the best method of nutritive supplementation for an full-term infant (click here for a comparison between the two).

Read more about nursing supplementers in my sections on Adoption and Relactation. 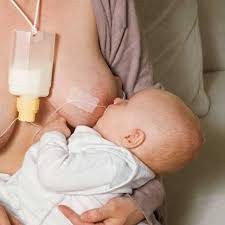 Other considerations for alternatives to nursing on the breast: finger feeding, cup feeding as I mentioned, spoon feeding, medicine dropper, syringe feeding, and bottles (read about those on the “Bottles Up!” page).

At 4 – 6 months, you should weigh the pros and cons of introducing a bottle as opposed to a cup since most babies can learn rather easily to drink from a cup at this age, including open-mouth cups, trainer cups, spouted cups, straw cups, and sports bottles.