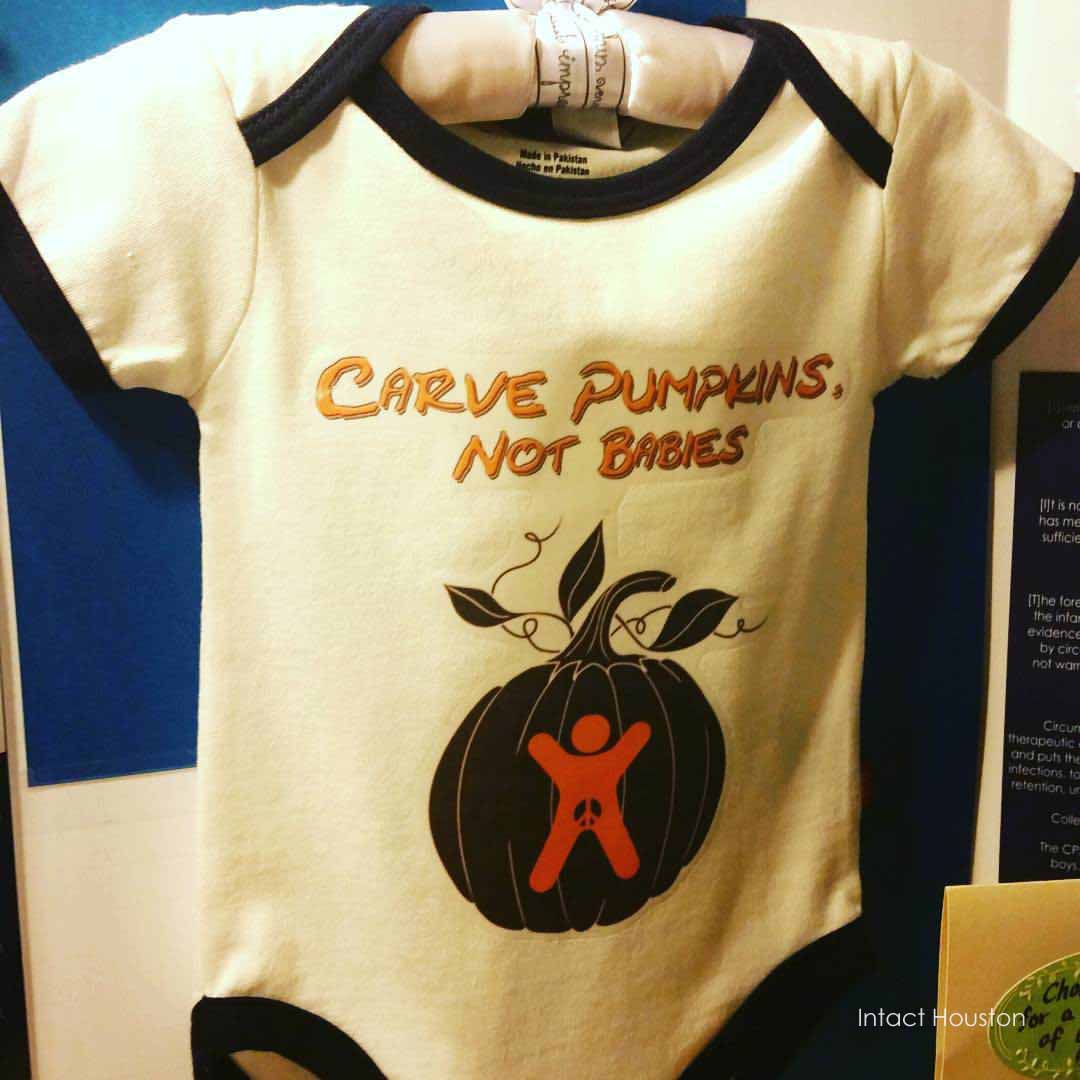 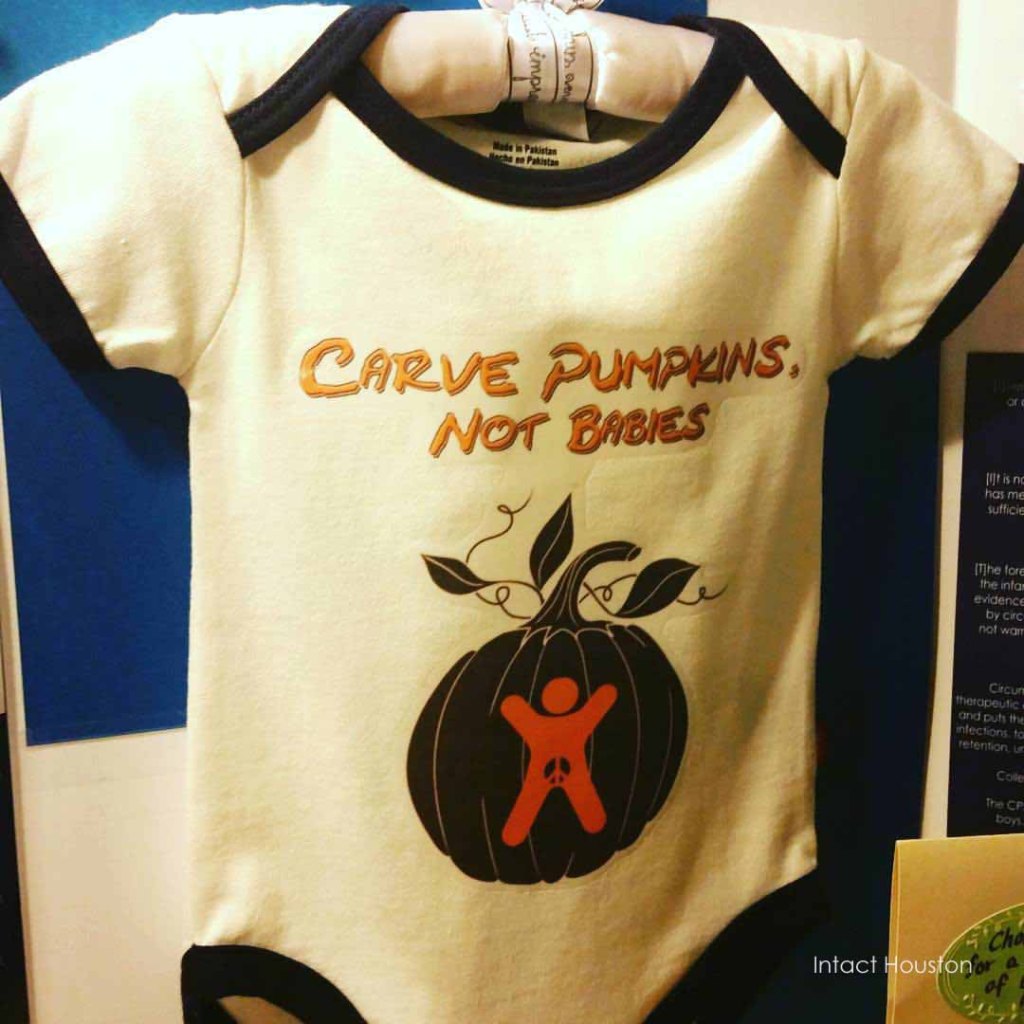 I spent most of this weekend with The Designated Dad talking to people about circumcision — mainly the two most common types in our country, which are neonatal male “medical” circumcisions in hospitals and religious circumcisions with mohels.

Our location: B.I.R.T.H. Fair (the acronym stands for “Bringing Information and Resources to Houston”), which is a hugely popular event that features more than sixty vendors, speaker sessions, giveaways, and education about pregnancy, birth, and parenting.

Our mission: Make it easier for people in our area to know better so they can do better… the result of which would see them bringing their whole babies home ❤

Read on for a collection of memorable stories and interactions from our day at the event. 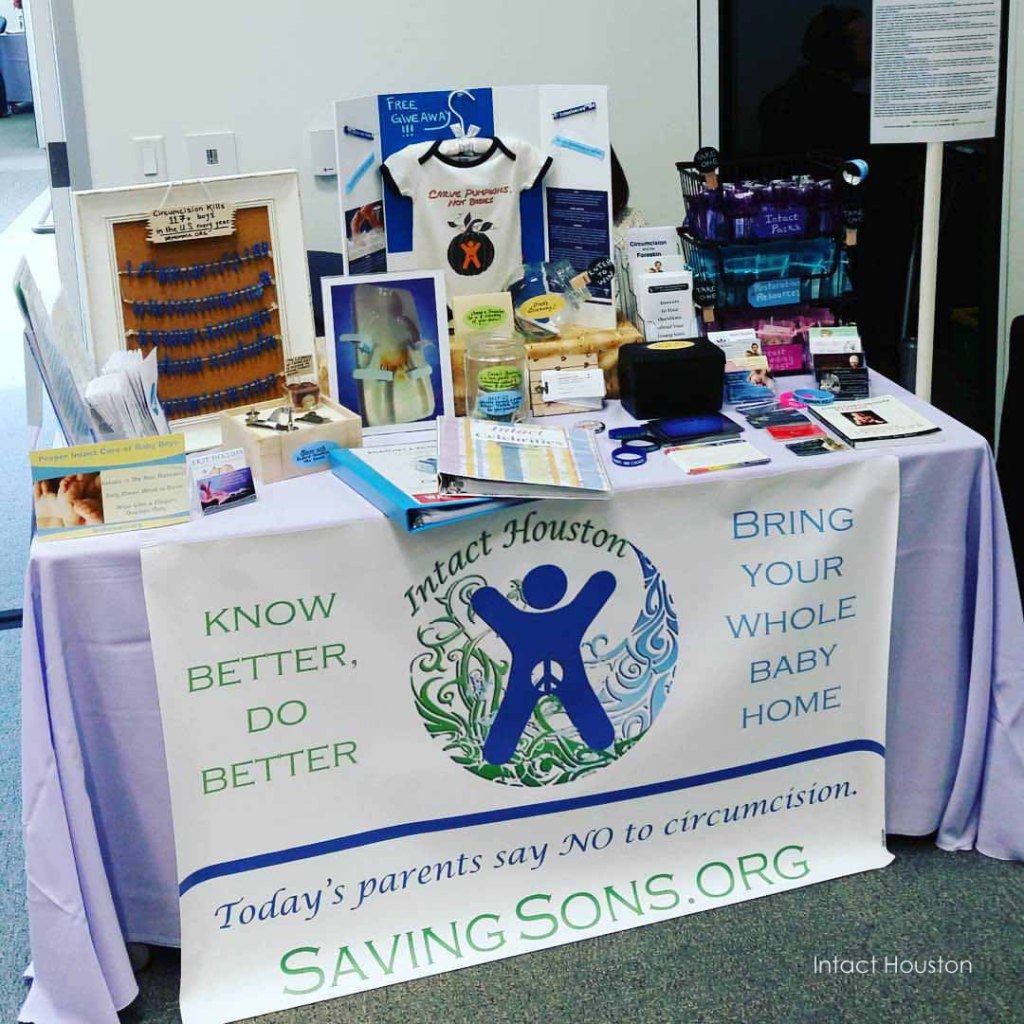 A registered nurse at an area hospital stopped by the side of our table to potty her young baby Elimination Communication-style.

Afterward, she told us that she’d worked in Africa for a while and was aware of the activity of adolescent female genital mutilation, but had refused to watch.

She described how circumcision there is treated as a big public display, so not only must a child endure the pain of physical barbarism itself but also the emotional turmoil that comes with suffering before a gawking audience.

She said one person even spoke out publicly against the practice… right before he performed a circumcision for the crowd to see.

Is the tradition so deeply embedded into such cultures that we may fear it’ll never stop, even when minds become attuned to the reality of the violence inflicted upon these children? 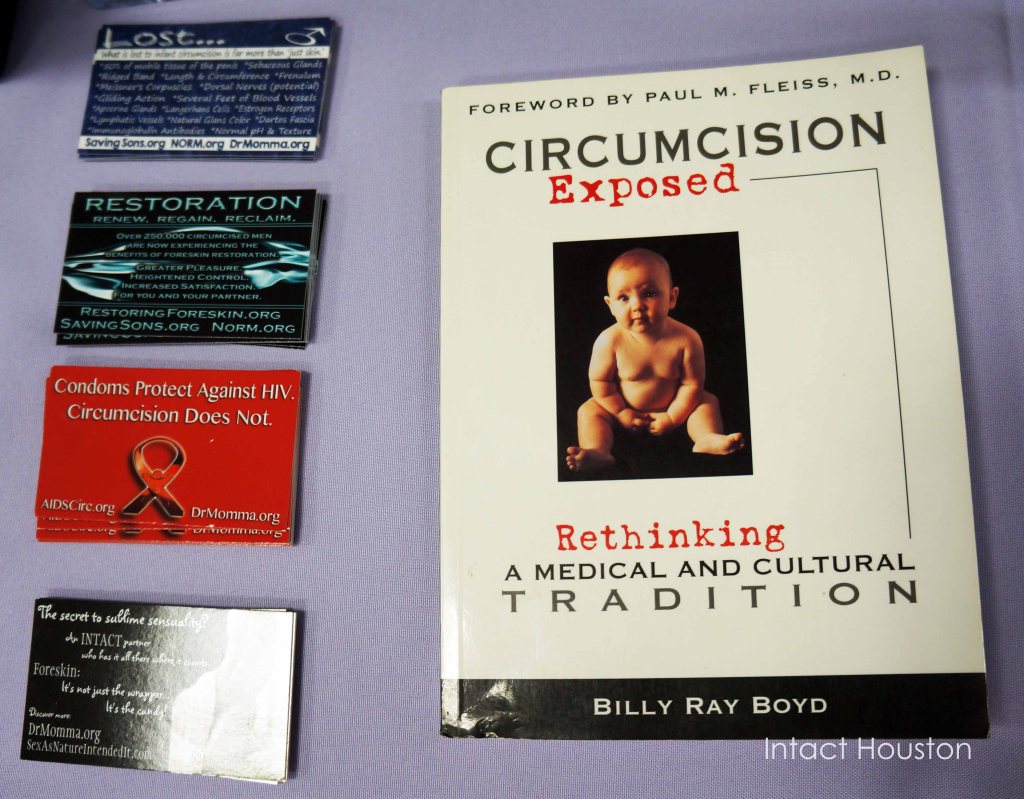 Several couples who appeared to be first-time expecting parents attempted to shimmy unnoticed past our table, pausing only briefly enough for the woman (in all cases) to knowingly nudge her male partner to direct his eyes at the information on our table.

No sooner than this happened, they disappeared.

It was almost like the “circumcision decision” had become the “big elephant” during their pregnancy and it was understood as a topic not to be discussed.

“Did you REALLY research?” Pop Quiz 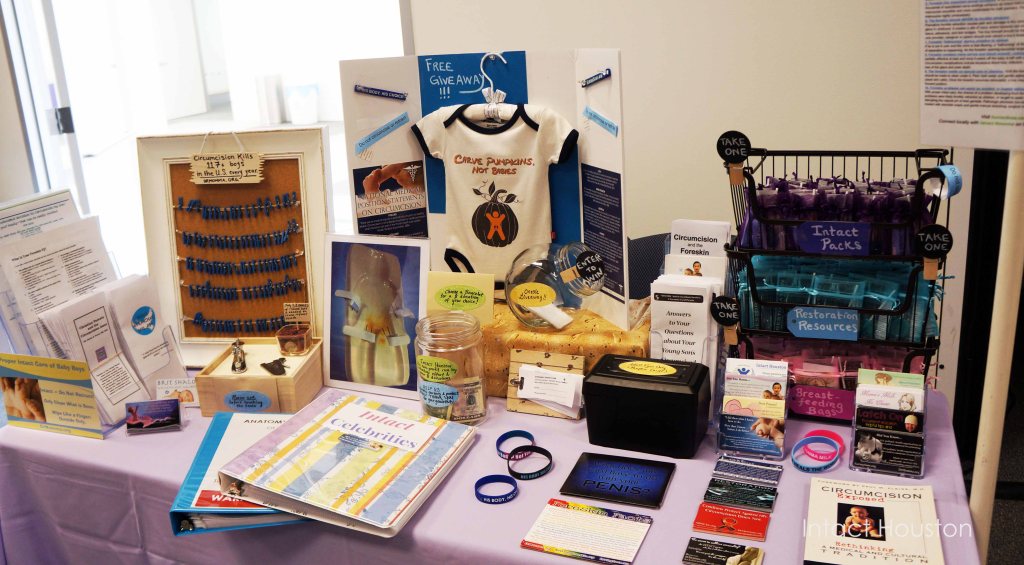 Most doulas and birth workers said they always try to bring up the circumcision decision with clients but have a difficult time knowing what to say to discourage the clients’ choice “for” it. They find themselves staying regrettably neutral to avoid offending them.

I recommended that they ditch as much “anti-circumcision” language as possible and instead focus on positive teaching, especially about the beneficial functions of foreskin to show how it’s not just skin, but a quite valuable and useful organ.

I also suggested mentioning the long-term consequences of circumcision because many unacquainted people are only familiar with the immediate potential complications present in a newborn, which lead many to believe it may be “worth it” in the long run. 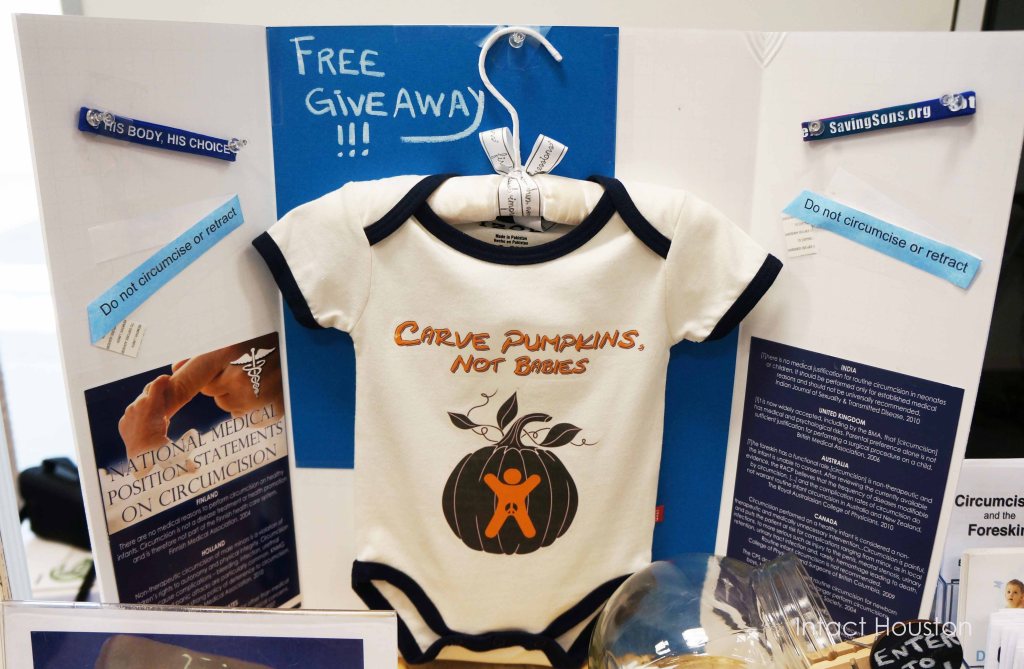 A handful of people made a point to let us know they kept their sons intact. Before I could thank them for educating themselves, nearly all of them said they didn’t research circumcision at all but had decided not to alter their son’s body because “it just seemed wrong” and in the the majority of cases, the child’s father and relatives were intact too.

Whenever someone mentioned that they kept their child intact or planned to do so, I made sure they left well-versed in proper intact care.

Several confirmed that their pediatrician had instructed them to push back the foreskin “a little” to clean underneath with a Q-tip, but luckily no one claimed to actually follow that dangerous advice.

Basic Care of the Intact Child 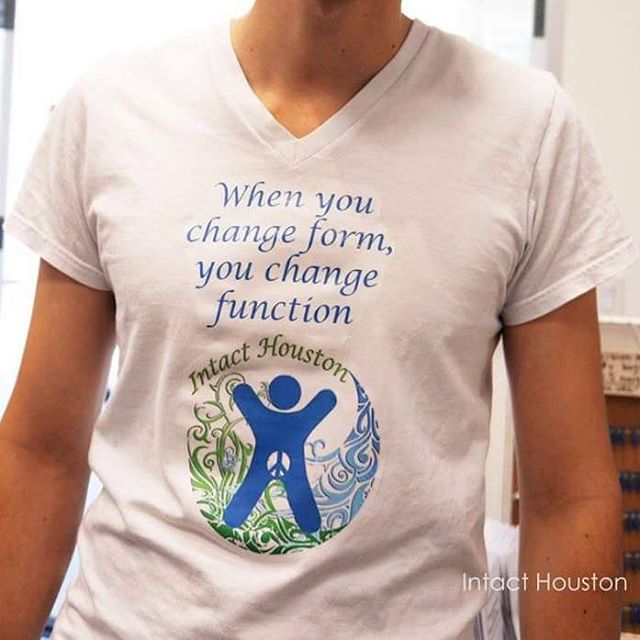 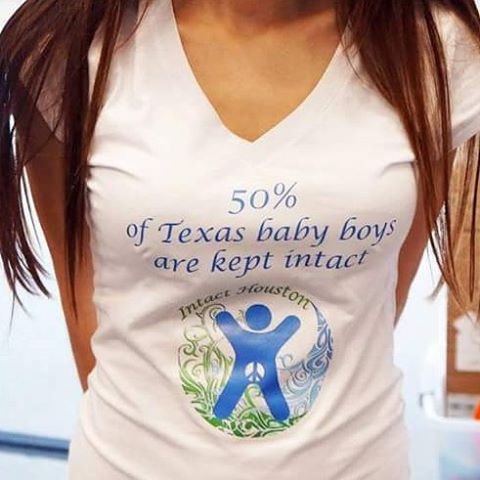 One very sweet mother strolled over with her two young school-age boys. She asked what our table was all about, and said her boys were circumcised. She said she never even looked into it because she felt it should be the father’s decision and had left the choice up to him.

Panning over our materials with wide eyes, she acted like this was the first time she’d seen anything like it.

“Wow, I just never knew ANY of this!” she said.

She ended up taking literally one (or more) of every item available on the table and smiled graciously as she left. 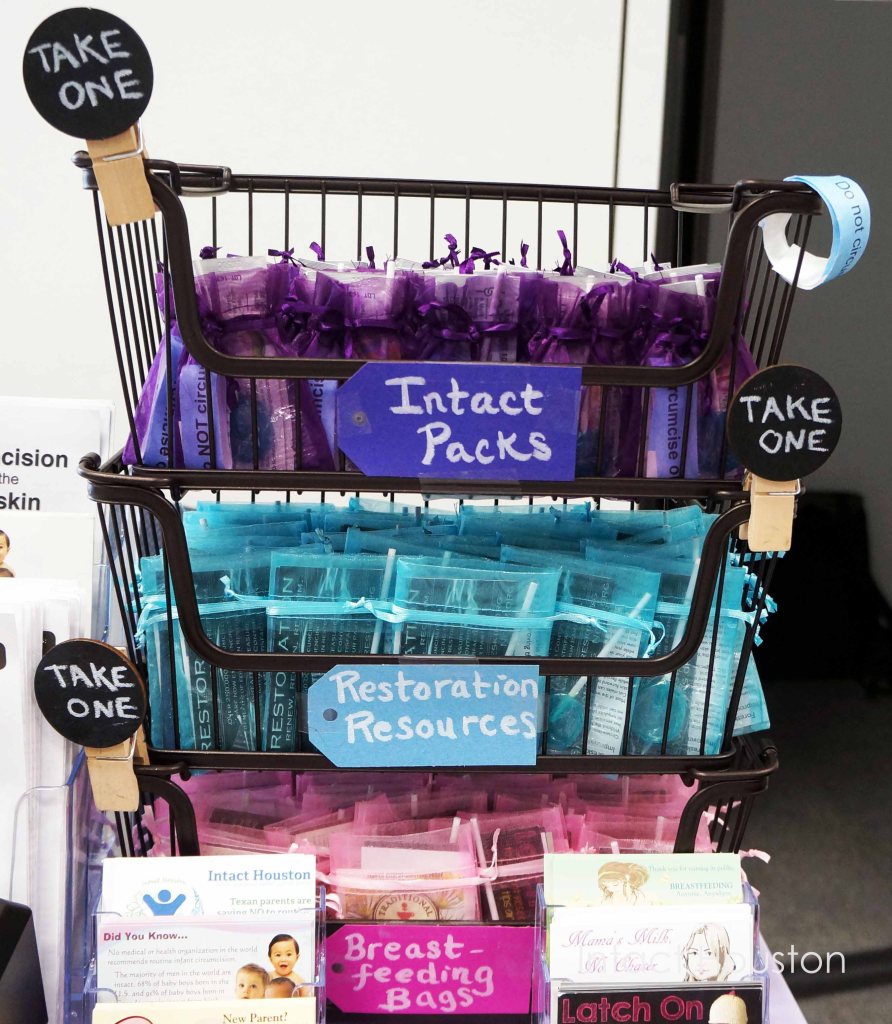 “Intact Packs” are perfect for those who plan to keep their babies intact, or to stick in a baby shower gift. They include:

– “Do NOT circumcise or retract” newborn hospital bracelet from TLCtugger.com
– Calmoseptine sample, which can be applied to boys or girls to heal skin irritations
– “I’m intact, do not retract” sticker that can be placed on diaper wipes or diapers to remind babysitters or daycare workers about proper intact care

“Restoration Resources” are great for men (and their partners) who are interested in the process of foreskin restoration. They include: 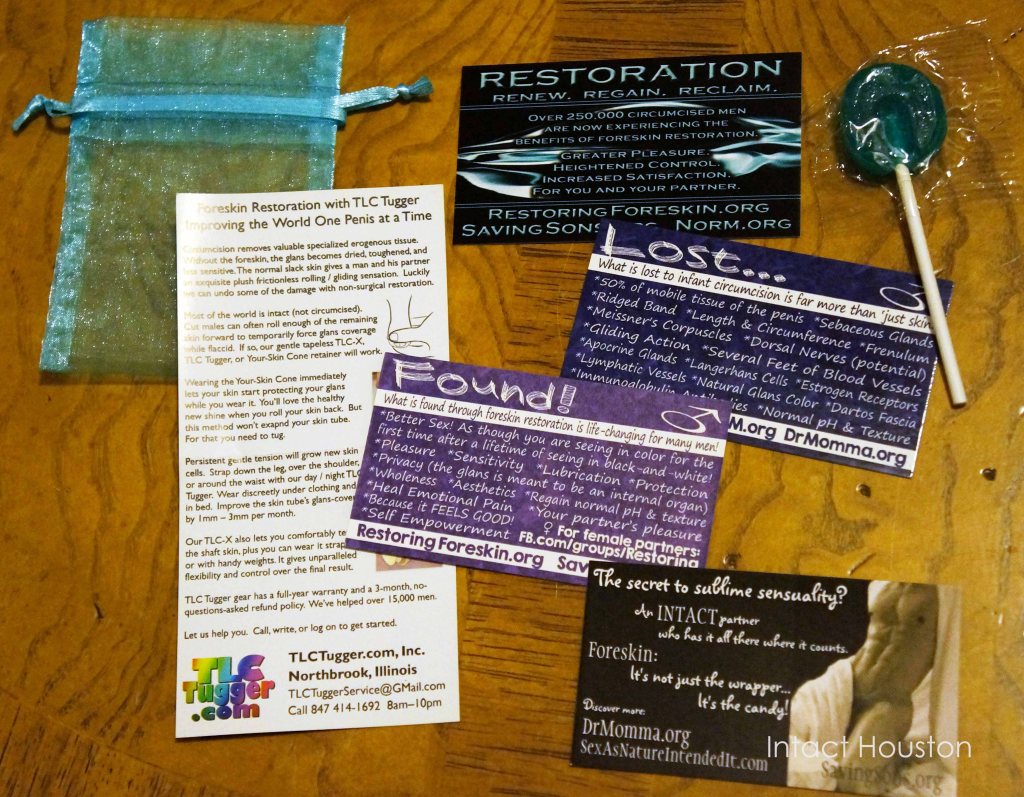 “Breastfeeding Bags” can be given to expectant mothers who plan to breastfeed and could use direction toward helpful lactation sources. They include:

Some also included a Lanolin sample with a $1 off coupon. 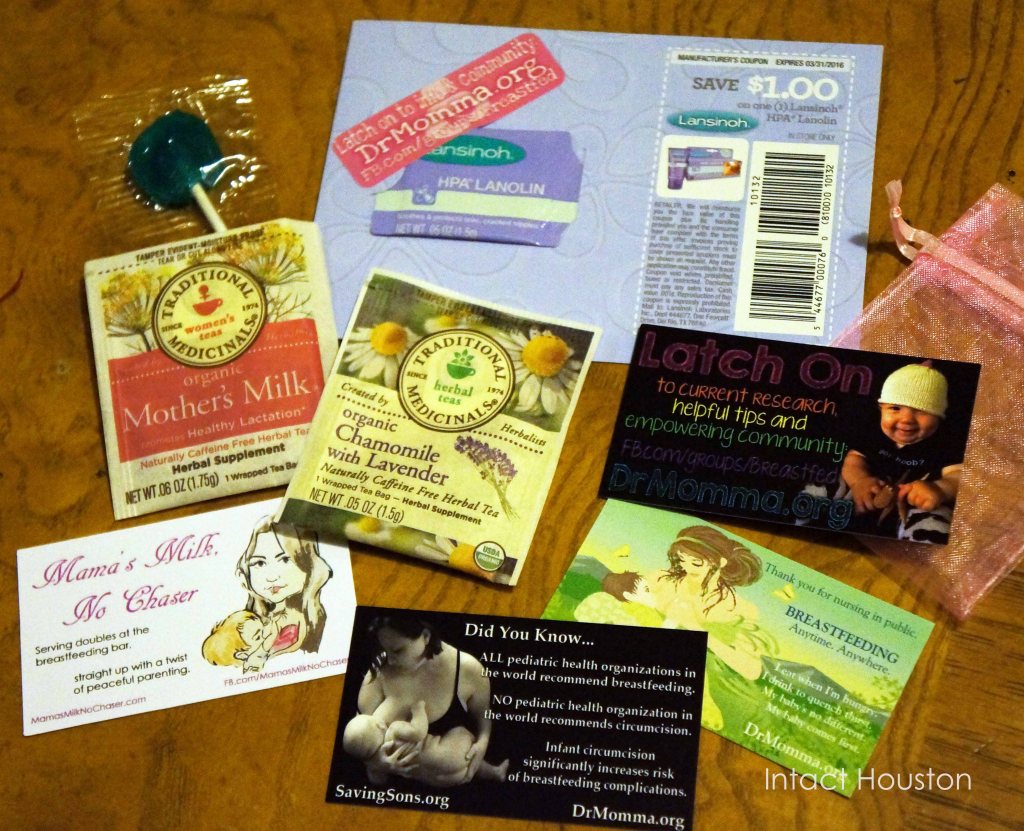 A young pregnant mother and her husband came by to check out our bracelets and grab bags.

She mentioned that she was an intactivist, too.

This was a perfect opportunity to mention one option… “Actually, it’s not too late for you to regain at least some of foreskins lost functions! Have you heard of restoration?”

His wife’s face immediately perked up in recognition. I could tell she liked where this conversation was going. We gave him a “Restoration Resources” grab bag and explained how there are various (all painless) methods that thousands of men today use to create new penile skin.

His wife interjected, “But I’ve never really heard any success stories with this…?”

It seemed as if she was hoping (or knew) we’d correct her, because the truth is the vast majority of men who attempt any degree of restoration find it a worthy and positive endeavor.

The Designated Dad suggested he browse RestoringForeskin.org (where he’d find tons of success stories) and SexAsNatureIntendedIt.com.

He left the table seeming a little surprised, but with a beaming wife, her arm now hooked in his… 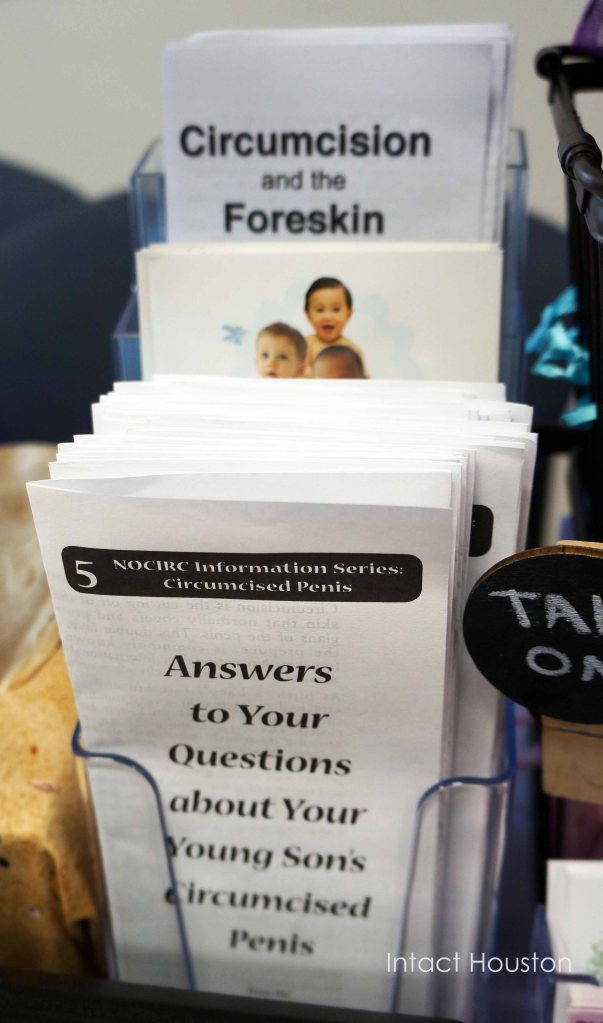 A pregnant mother who was attending the event by herself stopped by asking for advice on how to get her husband on board with keeping their expected son intact. She said she didn’t want to circumcise but he was not going to budge on the issue, and wouldn’t even watch a video.

I recommended having him watch “Elephant in the Hospital,” a video on YouTube that’s known for its straightforward, non-confrontational and non-judgmental delivery of information.

I gave her the link to articles on SavingSons.org that were written for/by men about the circumcision decision.

I also assured her that her predicament is the most common one I see, and that she’d find lots of great tips in Saving Our Sons’ Facebook groups from near victims of the “baby must match daddy” idea.

Video: “Child Circumcision: An Elephant in the Hospital”
Must a boy match his father?
Father/Son Matching Penises: Stop the Insanity! 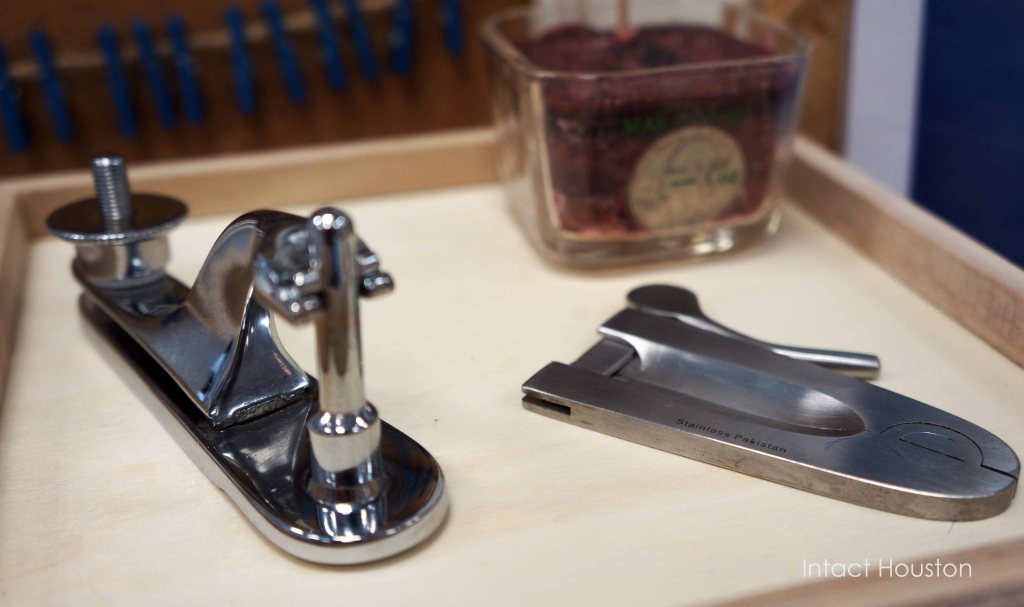 One young couple expecting a baby boy spent a while at our table. The woman said she didn’t want to circumcise but that they still needed lots of information to support and validate that instinct.

He looked briefly at each card and quickly said, “Well, that made my decision…” 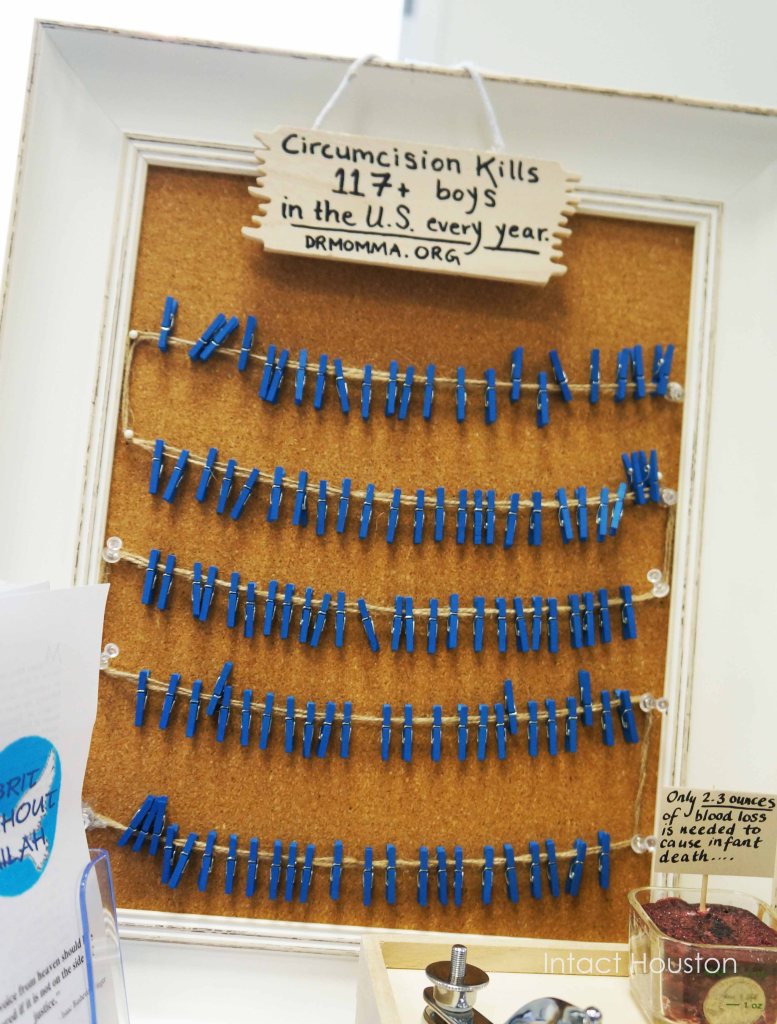 Birth workers, event speakers, parents of circumcised children, those with intact children, other vendors, and everyone in between who passed by all had something in common: Hardly ANYONE seemed to be aware that babies die from circumcision surgery in U.S. hospitals.

This visual board of clothespins that represent the 117+ boys reported by hospitals as having died from circumcision every year is always a vital component of our display.

“100+ circumcision deaths in the United States” 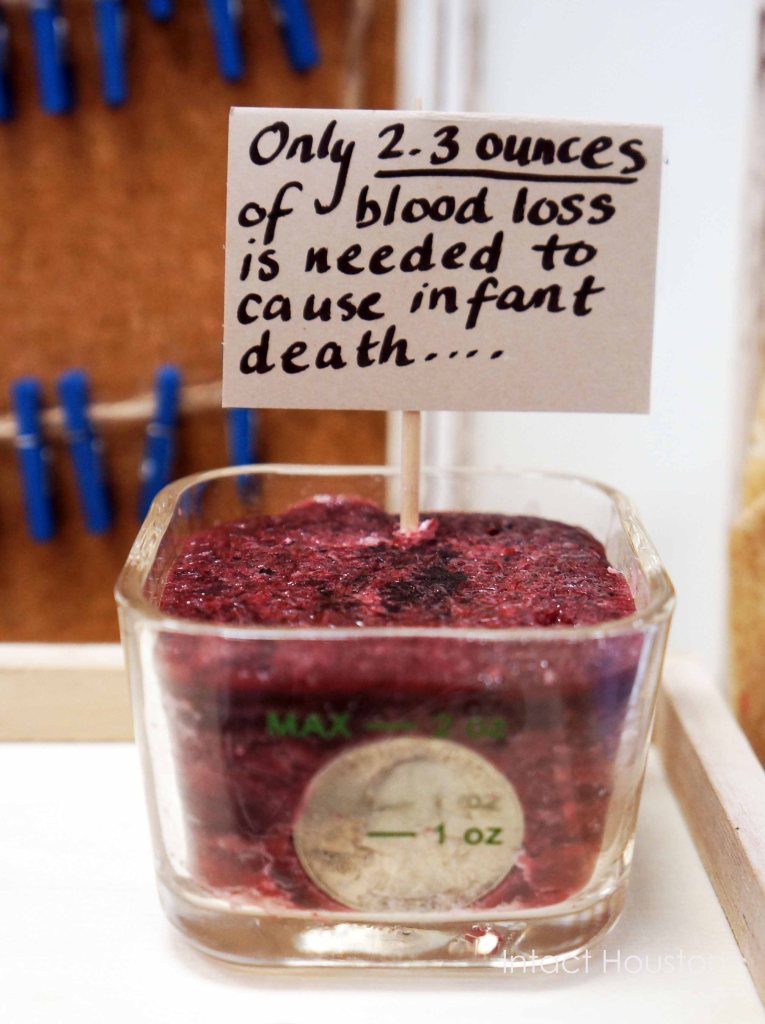 “A baby only needs to lose 1 ounce of blood to hemorrhage, and just 2.3 ounces to die as a result of this blood loss. It can, and does, occur at a frightening quick pace.

“That’s what makes circumcision as prophylaxis so ridiculous when you crunch the numbers. It’s very rare to medically NEED a circumcision – the risk of penile cancer is incredibly low, and any rare complications that may arise can almost always be treated with less aggressive methods rather than amputation.

“The simple act of practicing proper intact care eliminates many of these possible complications.” – past Intact Network director Kristina Tung 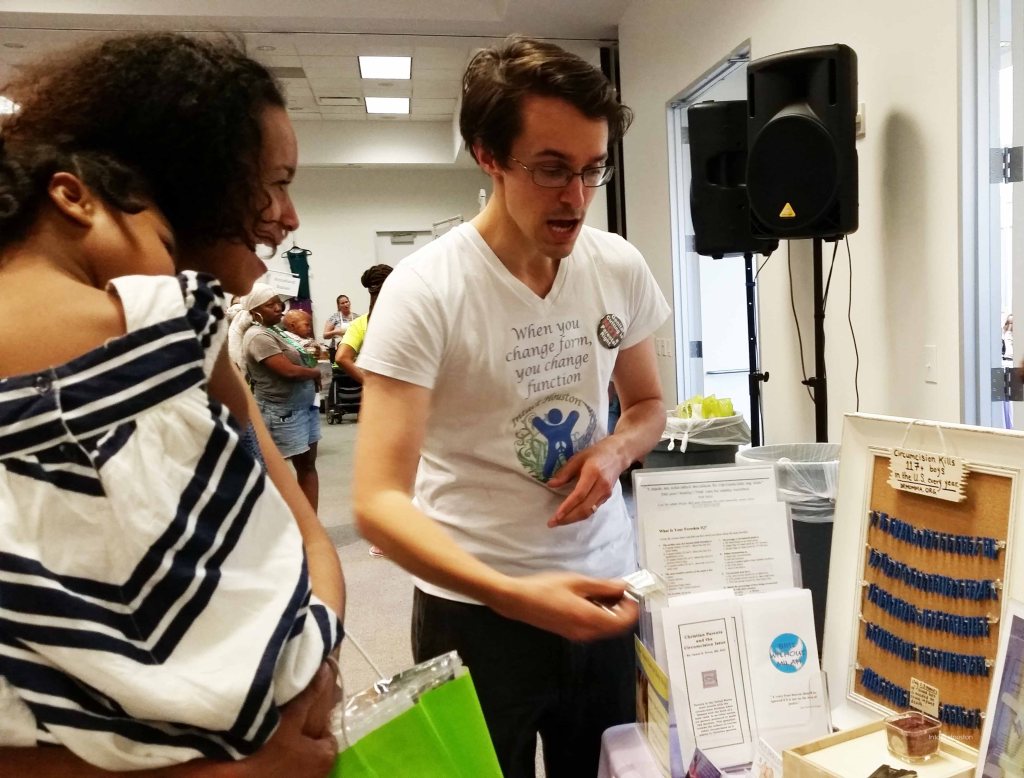 Looking in horror at the surgical tools and Circumstraint photo and literally crying out in shock as she held her daughter, this mother said, “Is that what they use for the babies? They don’t still use that though, do they?”

We told her that yes, unfortunately this is a modern piece of equipment called a Circumstraint, a cold plastic board that features four-point restraints to immobilize a child as he undergoes tissue amputation. 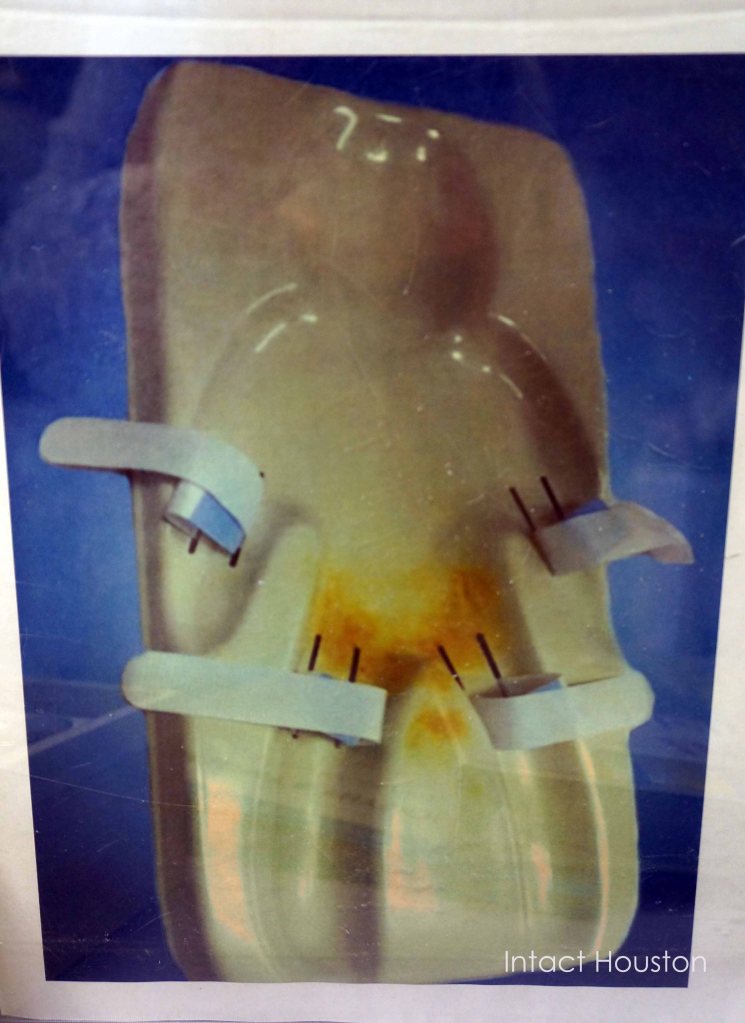 From the manufacturer’s own description of the device:

“In less than 30 seconds, a nurse can immobilize the struggling infant securely in the correct position with Circumstraint. The immobilizer works on a proven principle of positive 4-point restraint. Soft wide Velcro® brand fastener straps encircle the infant’s elbows and knees, depriving him/her of leverage. The child is held safely and securely without danger of escape. Circumstraint’s comfortable contoured shape positions the infant, hips elevated, perfectly presenting the genitalia. The platform between the infant’s legs provides support for a circumcision clamp. Without pins, towels, plastic shells or the threat of strangulation, Circumstraint snugly and securely immobilizes the infant with their entire torso visible.” 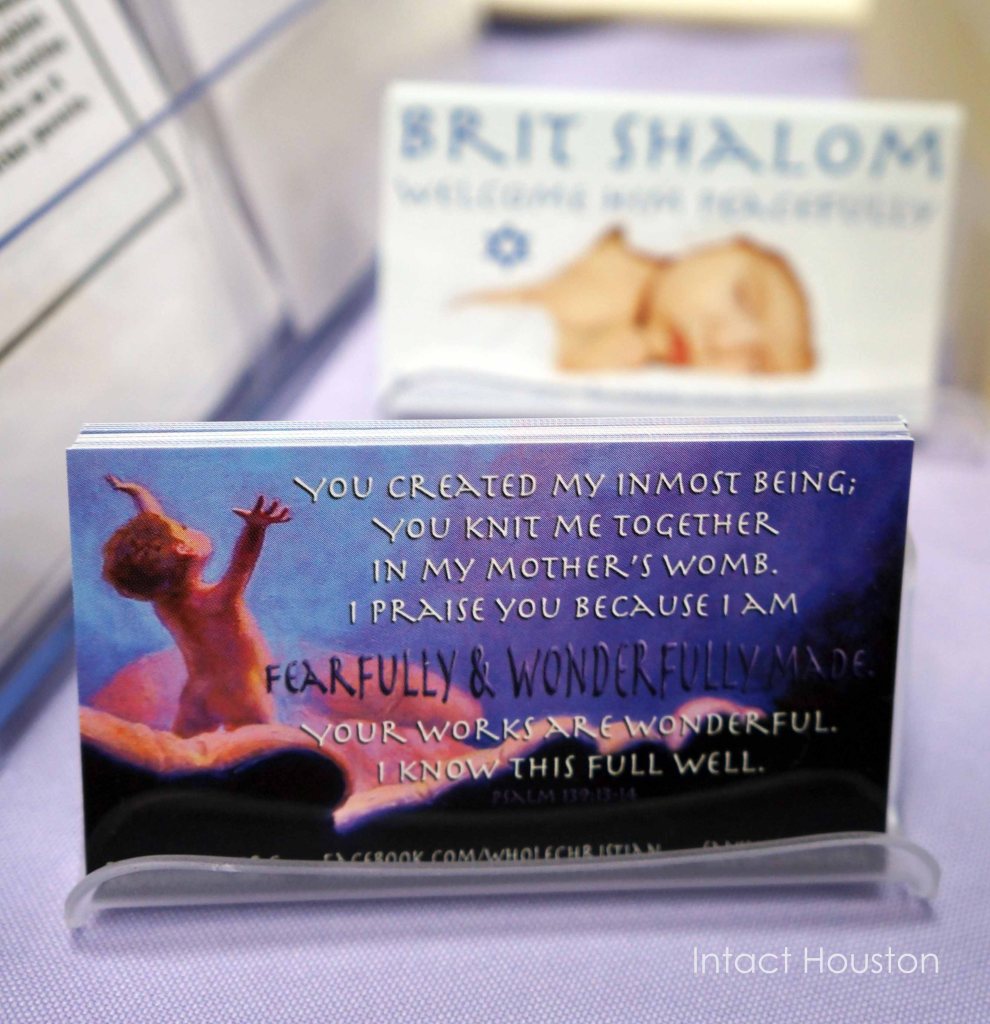 A mother babywearing her intact boy asked me for “gentle” information to give to her friend. She said that her friend refused to listen to her about circumcision and is due soon with a boy.

When she posted about FGM on her Facebook profile, her friend replied that she was disgusting and too aggressive, so she needed help with an approach that wouldn’t continue to turn her friend off.

I explained how our organization is founded on gentle advocacy and was able to direct her toward many of our resources at SavingSons.org and DrMomma.org.

Our signs caught the attention of a young father of a boy and girl.

He asked The Designated Dad, “So, wait… why not circumcision?”

So he explained a few of the main concerns — that it’s not as healthy, it’s painful, it’s damaging, permanent, and most importantly a grave breach of ethics in the area of consent.

“It’s a personal choice, not a parental choice.”

The father looked confused and asked, “But isn’t circumcision cleaner?”

I explained how foreskin exists as protection against infection, bacterial contamination, and has immunological properties that are lost to amputation. He appeared stunned.

“Man… that’s what they told me in the hospital. That it’s cleaner.”

He glanced over at his children who were visiting a neighboring booth with his wife. The look on his face was hurt and apologetic.

“Yeah, you’re right… I guess you can never get it back…”

The Designated Dad told him, “It’s true that circumcision causes permanent loss of that natural organ as it was meant to be… but thankfully through the process of mitosis, restoration can help make a circumcised man get back some of what was taken from him.”

The father was astounded that something like this was even possible. We noticed that he hung around our table often for the remaining hours of the event — passing to and fro, stopping to make small chat… an indication of a piqued interest and newfound respect for our cause.

More Circumcision Myths You May Believe: Hygiene and STDs

One young father said, “My parents cut me, and I was going to cut my son too because it’s just what you do. then someone asked me, ‘If you had your whole penis now, would you cut it?’ I thought, No, I wouldn’t… and that question really changed my mind.” 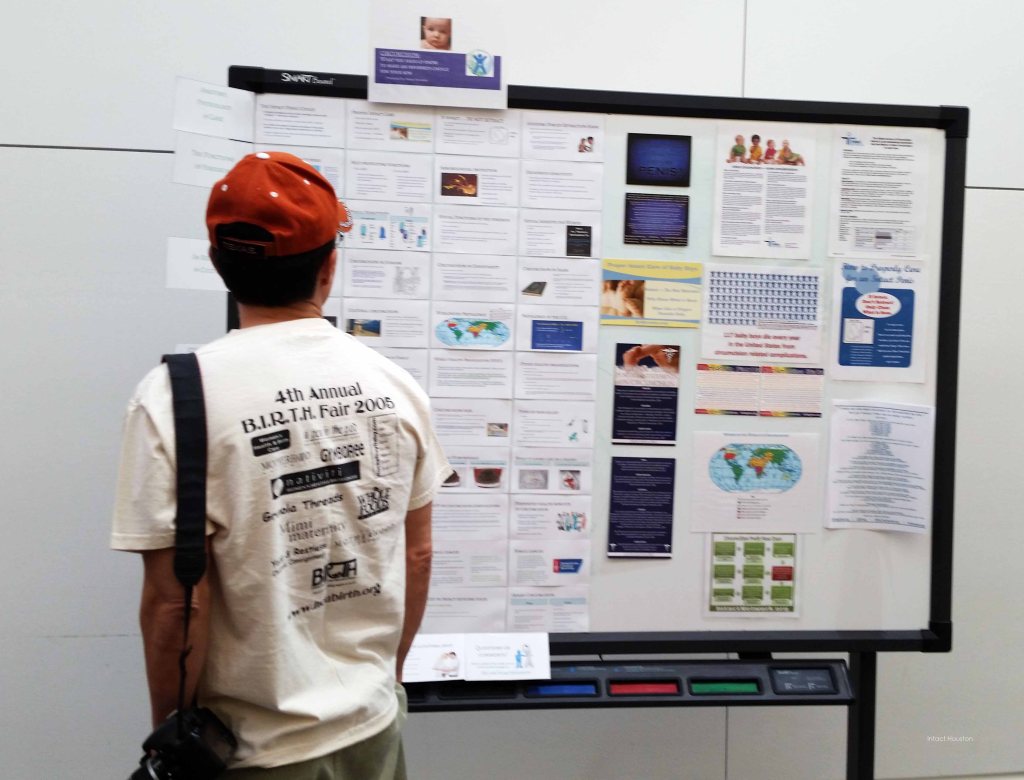 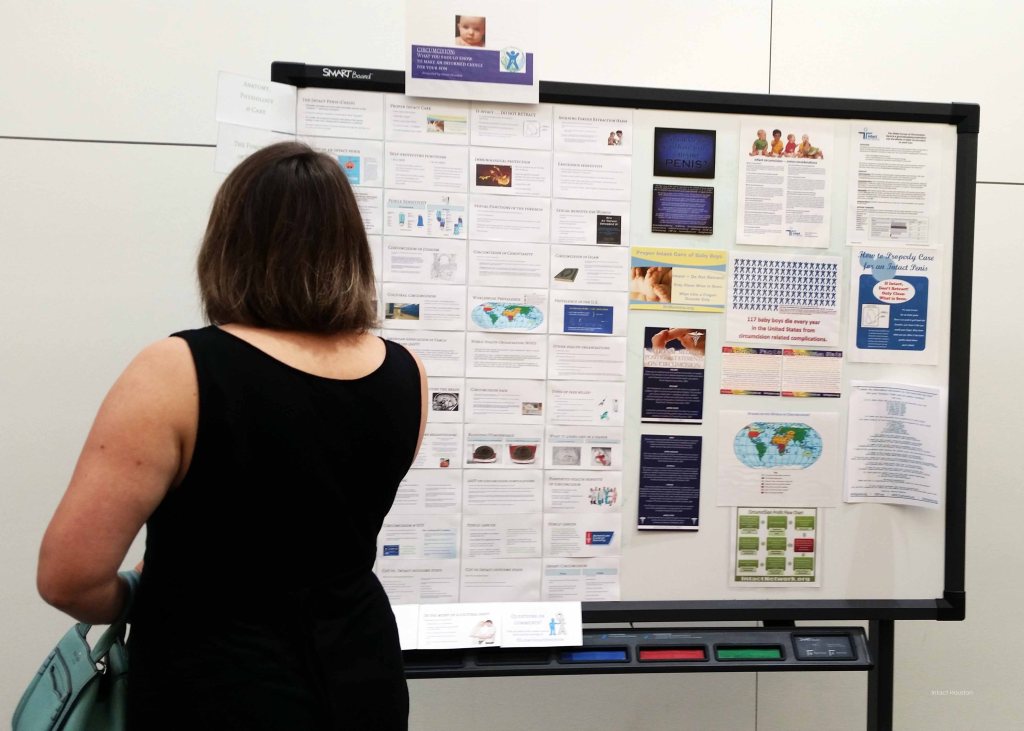 “How can we be so oblivious to the harm this practice causes? Could it be because – like me – so few really know what circumcision really is?” – Patricia Robinett

Quote from: “The Rape of Innocence: female genital mutilation and circumcision in the USA” 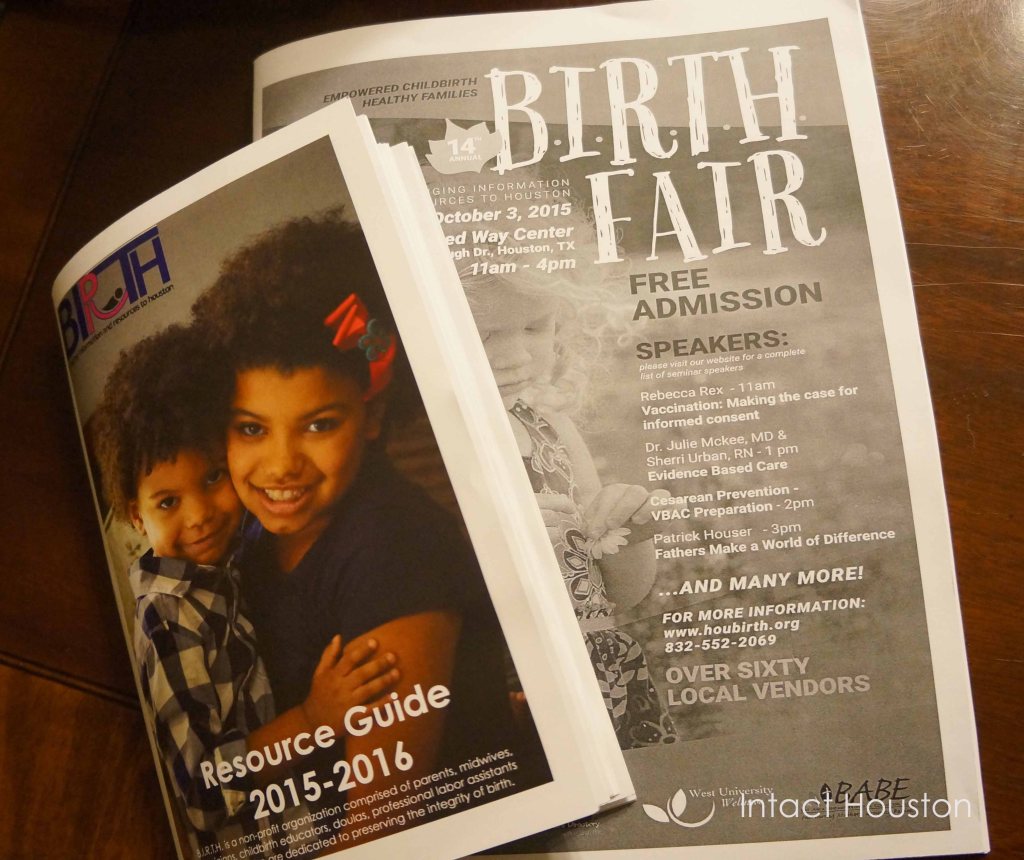