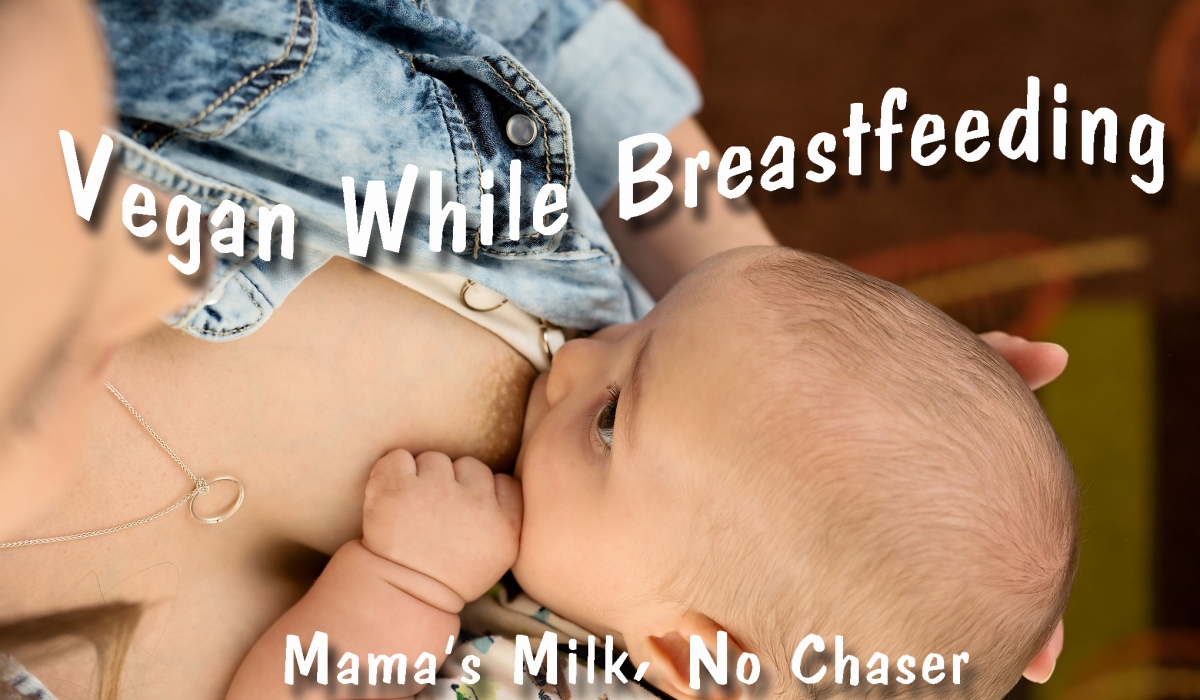 Is your little bean sprout kind of literally a bean sprout, thanks to your meat-free milk? Many women remove animal products from their diets in hopes of improved health, and thankfully it has been shown that animal-friendly lifestyles are not only perfectly safe but also as beneficial to a breastfed baby as his mother.

I read about maternal vegan diets while breastfeeding and had no concerns that my milk would still be perfectly healthy (in fact, likely more so). When my baby was exclusively consuming vegan breast milk, he was in the 94th percentile for weight, delightfully roll-y, meeting all milestones, and clearly not starved for nutrients.

Usually, there is great concern about getting enough protein in a vegan or vegetarian diet. This is rarely the case in reality. Americans tend to be preoccupied with “enough protein?” when the real question should be “enough fiber?” Most Americans live with the burden of protein overload. Interesting to note that medical conditions linked to “protein deficiency” are due to famine and inadequate food intake overall, not due to absence of dietary animal products or strictly a lack of protein. Plants have protein! If you’re eating plants, you’re getting protein. If you’re eating enough plants, you’re getting enough protein.

What mothers should actually pay close attention to is (this applies to all nursing mothers, not just vegan ones): Vitamin B12, Vitamin D (which isn’t truly a vitamin, but I digress), zinc, and fat intake.

Vitamin B12 is a necessary supplement for vegan mothers and non-vegan mothers without balanced diets. Did you know B12 is made by bacteria, not animals? Non-vegans tend to be at lower risk of B12 deficiency as the animals they eat were previously supplemented with B12 as factory farmed animals don’t eat natural diets in which they’d get B12 through the environment. Yet, 40% of the U.S. population — a majority of whom eat animals — are still B12 deficient.  Chances are that vegan mothers are conscious of this and already take a B12 supplement (whether in pill form or fortified in food) and thus wouldn’t need to worry about her breastfed child’s B12 status.

As for whether supplementing a particular baby is appropriate, you may find more information on that topic here.

Yes, human breast milk is vegan. Even if she (the mother) is not vegan, and even if her milk is not built from a plant-based diet, the act of her baby consuming it is still vegan. Remember that breast milk is created from the blood, not from the gut.

This article expounds on these ideas nicely.

Human breast milk is the best feeding option for human babies. Babies born with the rare condition galactosemia typically cannot tolerate breast milk from any species, including human, and must consume a specialized formula such as soy-based or lactose-free.

The concept of using donor milk is perfectly vegan. The milk is willingly given, with fully informed acceptance of any risk and benefit, and no animals (human or non-human) are harmed in this process.

Well, that last bit only really applies if the donor mother is vegan. Thankfully, there are informal mother-to-mother breast milk donation sites where you can offer your vegan milk or search for vegan donors. Thing is, they aren’t exclusive to vegans so you will need to make a special request for milk from mothers who eat a plant-based diet.

Non-dairy formulas exist, but they’re vegetarian — not truly vegan. These formulas are soy-based, but the added vitamin D will have been sourced from sheep’s wool lanolin, and you’ll find other trace amounts of animal-derived ingredients.

This type of formula contains soy as a protein source and glucose or sucrose as a carbohydrate base. It’s most often recommended to infants with an inability to digest lactose. According to the AAP, as many as half the babies who cannot digest lactose are also sensitive to soy, so they usually go on a specialized diet of elemental or amino-based formula.

Look for a formula made in the U.S. (not China where melamine is a concern), one that provides adequate iron and DHA sourced from algae.

Some animal derivatives may be unavoidable in the manufacturing of a baby’s formula, but parents who wish to raise him or her as a vegan can still do so when they’re ready to explore solid foods.

No, approximately 80% of infant formula is based primarily on cow’s milk proteins, according to the American Academy of Pediatrics (AAP). Some are also based on goat’s milk. The makeup is slightly altered to become more easily digestible by human babies. It’s estimated that 2-3% of infants have a true allergy to milk proteins, and many babies are unable to digest lactose, which is the main carbohydrate in cow’s/goat’s milk.

Some parents decide to commit to homemade formula, but this is not usually recommended and often even strongly recommended against. Commercial formulas pale in comparison to human breast milk, but they’re still an adequate source of nutrition for growing infants.

No, it isn’t vegan because Lanolin is derived from sheep’s wool. Try alternatives like coconut oil, olive oil, evening primrose oil, or your own hind milk to keep areolas hydrated and free from sores.

Read more about causes and solutions for cracked, dry or painful areolas here.