GETTING STARTED AFTER BIRTH:

Is this a myth, or does it really happen? Guess what, it really does! The olfactory sense plays a crucial role in aiding an infant’s recognition of its mother’s nipple — the ‘smellscape’ of mother’s breast.

“Breastfeeding is a brain-based behavior of the newborn, an inborn ability that is regulated by the limbic system of the brain. Newborns [have] the behavioral capability to breastfeed. However, this capability is fragile, and requires the uninterrupted presence of the mother, with specific stimuli at critical periods working to reinforce the inborn ability. The behavior can easily be modified, modulated, or abolished.” – from Impact of Birthing Practices on Breastfeeding by Linda Smith.

Get more answers to these frequently asked questions about The Breast Crawl.

To find out why you don’t need to rush to bathe your newborn for the first time, check out my post Before Baby’s First Bath, Learn About These 9 Things.

Getting a Good Latch

Latch, latch, latch! This might be all you hear about or think about for a while. Which makes sense as the difference between a good latch and a bad one can mean the world to your breastfeeding comfort, baby’s ability to transfer milk, and overall success.

Strive for baby’s mouth to open as widely as possible (think of a baby bird with an open-gullet plea for worms), taking in as much of the breast as possible (depending on your anatomy, this may include the skin beyond the areola — breastfeeding isn’t called ‘nipple-feeding’ for a reason), and baby’s lips should splay apart in a ‘duck lips’ manner.

A good tip: don’t go for a ‘bulls-eye’ sort of aim — you want to point baby’s nose up rather than forward so he takes in the bottom half of the areola first.

For the baby to be able to push milk out with his tongue, the nipple needs to be drawn across the soft palate toward the back of the throat, with baby’s tongue remaining underneath.

The ‘comfort zone’ is where the nipple is drawn into the baby’s soft palate, which is farther back than the hard palate. If the baby only takes the nipple into the front of his mouth, the shallow latch may feel painful and pinchy for mom.

This video gives an inside look of what’s happening in a baby’s mouth as he latches and transfers milk.

It’s not quitting time when you get that good latch, though — now, you’ll have to make sure baby is transferring milk. Listen for a hitch in the suck pattern, or a little ‘click’ from the back of the throat (it may be barely audible). That noise is your baby swallowing milk!

The Steps For Latching

1. Position yourself and baby. 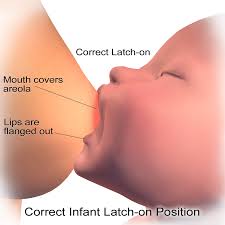 Realistic Expectations for the First Feeding

“Don’t rush the breastfeeding…Introduce your baby to the breast. This is a time for her to discover where her food will come from, not a time to fill her tummy. Newly born babies often just lick the nipple at first. Sucking in irregular bursts and pauses is the usual pattern for the first few hours…[or] the first few days.” – from The Breastfeeding Book

Is it okay to let baby latch and nurse even if she’s not trying to take milk? Yes, being available for non-nutritive (comfort) nursing is part of the job description and doing this will stimulate milk production.

“Sucking is good for the newly delivered baby. Crying is not. Sucking eases the tension that has built up during the stress of labor and birth. It is a familiar behavior, so it helps baby to adjust to her new environment.” – Dr. Bob Sears

If you prefer, you can say “no” to these routine procedures that may or may not be necessary, case depending, but can invite unnatural complication and delay in the immediate mother-baby bonding moments in many situations:

American Breastfeeding Medicine describes in its clinical review for hospital births what should ideally be happening with birth aftercare (share this with your hospital if the staff could use a reminder): The Going Home Protocol.

*Click to get help with vaccine exemptions in New York, a state that is notoriously bullying in matters of what its residents are mandated to do with their bodies or those of their children.

“Separating infant and mother at birth, even shortly, for doing routine cares such as neonatal assessment, vitamin K injection and repairing mothers’ episiotomy, could lead to less interaction between mother and infant, decrease mother’s self confidence in successful breastfeeding, decrease the mother’s learning about infant feeding and postpone the stage 2 of lacto-genesis.” – “The effects of post-birth mother-infant skin to skin contact on first breastfeeding” by Talat Khadivzadeh, Aghdas Karimi

Learn about the best positions to try for small babies, tall babies, young and old babies, polka-dotted and striped babies… Read my post Which Breastfeeding Position is Best for You? I Demonstrate…With Dolls!

Don’t miss the continuation of this series!