I posted a list of The 7 Grossest Breastfeeding Ads a while back. Those were puzzling indeed, but all could be reasoned down to ignorance, idiocy, or ill intentions. The following ads are just plain puzzling. Check them out and tell me what you think!

BY PETA (PEOPLE FOR ETHICAL TREATMENT OF ANIMALS)

BY THE MINISTRY OF HEALTH

It’s a breast! It’s a baby! It’s a kneecap! It’s a buttcheek! It’s a bird! It’s a plane! I’m not good with optical illusions. Someone help me out here.

BY HECTOR CRUZ FOR PROJECT: BREASTFEEDING

Photographer/daddy Hector Cruz launched this campaign in support of breastfeeding moms like his wife who struggled with nursing their child. When I first mentioned this photo series to The Designated Dad, he didn’t understand how it would actually help breastfeeders. You know, because it’s not like dads could ever possibly share booby duty and it just sounds like an excuse for dads to say, “Hey, it’s the thought that counts, honey!”

I like to think that Cruz hoped to get people talking about how much help new breastfeeding mothers actually DO need (a lot!) and get their non-lactating partners to start questioning how they CAN help. However, I’m curious as to why he couldn’t reserve billboard space to show dads scrubbing dishes, brewing a pot of lactation tea, or handling calls from the lactation consultant while their partners breastfeed the baby?

First, two examples from Hector’s campaign (more of his work here), followed by two of Hector’s photos featuring yours truly, MaiTai and the Designated Dad. (You’ll notice that ours don’t qualify as puzzling because neither one features a dude pretending to nurse a baby).

Sure, the following ad is “about” breastfeeding. But… wait, where’s the breastfeeding? A rather zesty ad nonetheless. My baby will take two homegrown and fresh squeezed, please.

BY U.S. DEPARTMENT OF HEALTH AND HUMAN SERVICES

Looks like the USDHHS had the same idea as above, no? Show breasts without showing a pair of so-offensive breasts…? Genius! But do you think nipples really DO taste like maraschino cherries to babies? I know my breast milk tastes like ice cream, so logically that means…

Okay, the next ad by the USDHHS is really pushing it. I’m getting kinda sick of the whole “every pair of things that are round with a spot in the center look just like breasts” thing. Here, I believe someone in the marketing boardroom opined that breasts can be symbolized by delicate flowers (pretty sure those are weeds, actually), ladies being so dainty and all, and nursing breasts being just as worthy of feature in a watercolor painting.

Or maybe some smart ad executive mentioned how much perkier breasts get during motherhood, akin to springy, blooming flowers. It’s just, you know, such common knowledge that pregnancy, increasing age, and bras that haven’t fit properly since before having kids are really good for maintaining that “blossoming maidenhood” look.

This ad gives me hope that my breasts will spring anew into the somewhat higher-altitude plains at which they once resided. Don’t let me down, USDHHS! (Literally). 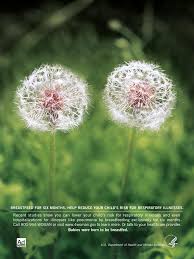 Nothing about this next ad touting breast milk’s anti-infective properties screams “Breastfeeding” to me. Except where it reads: “Breastfeed…” Otherwise, it’s just an ad for contact lens cases. Maybe I’m discriminating to a fault. Or maybe I’d really just like to believe my lactating rack looks more like the above ice cream sundae or flowers (weeds, whatever!) than these ear-inspecting medieval torture devices.

BY BEST FOR BABES FOUNDATION

Here’s another one of those ever-popular optical illusions. I see a lampshade. Or a tulip pint glass. A topographical view of an estuary. Maybe a close-up of a horse’s face.

So women (and breasts) stimulate the economy. I wish I could say this is news, but…

This 1993 print ad features a model simulating the breastfeeding of a Rent-a-Baby (I wasn’t there, don’t press for confirmation of the baby’s origins). The campaign intended primarily to sell Bisou Bisou’s trendy clothing, not breastfeeding. In November, 2014 (more than two decades after its original release) the ad became the featured campaign on the clothing brand’s web site. Perhaps attempting to ride the coattails of breastfeeding as it recently came back into fashion, but no harm done — any kind of normalization is still normalization. So thank you, BB!

Here’s a still frame of a commercial that aims to sell diapers. What appears to be a baby bottle sits just to the right of the frame, but center stage is a breastfeeding mom. She’s updating her server on what she needs without any “uncomfortable moment” bullshit, because this ain’t her first rodeo (as the commercial illustrates earlier).

What’s puzzling is that the waiter seems confused or embarrassed, Luvs’ idea of the expected reaction from someone who happens across a breastfeeding pair. A better pro-breastfeeding message would show that it’s in fact seeing the breastfeeding pair that is expected, rather than the reaction of surprise.

Also, not the most flattering still shot, I’ll admit — so check out the video below for the full experience.

Oreo! Well, of course the convenience food most easily and happily downed with (or submerged, dipped, or crumbled into) a tall glass of milk must have something interesting to say on behalf of milk itself. This time though, it’s human milk. “Milk’s favorite cookie,” claims Oreo’s ad. Granted, this ad never ran in any publication. Probably had something to do with a Photoshopped baby hand death-gripping the featured product… with his mouth.

BY UNITED COLORS OF BENETTON

This ad ran as part of the clothing company’s 1989 anti-racism campaign. The fact that the model is breastfeeding received perhaps more attention than the elimination of racial boundaries. The controversy that followed seems a bit ridiculous today, but in 1989 people were weirded out.