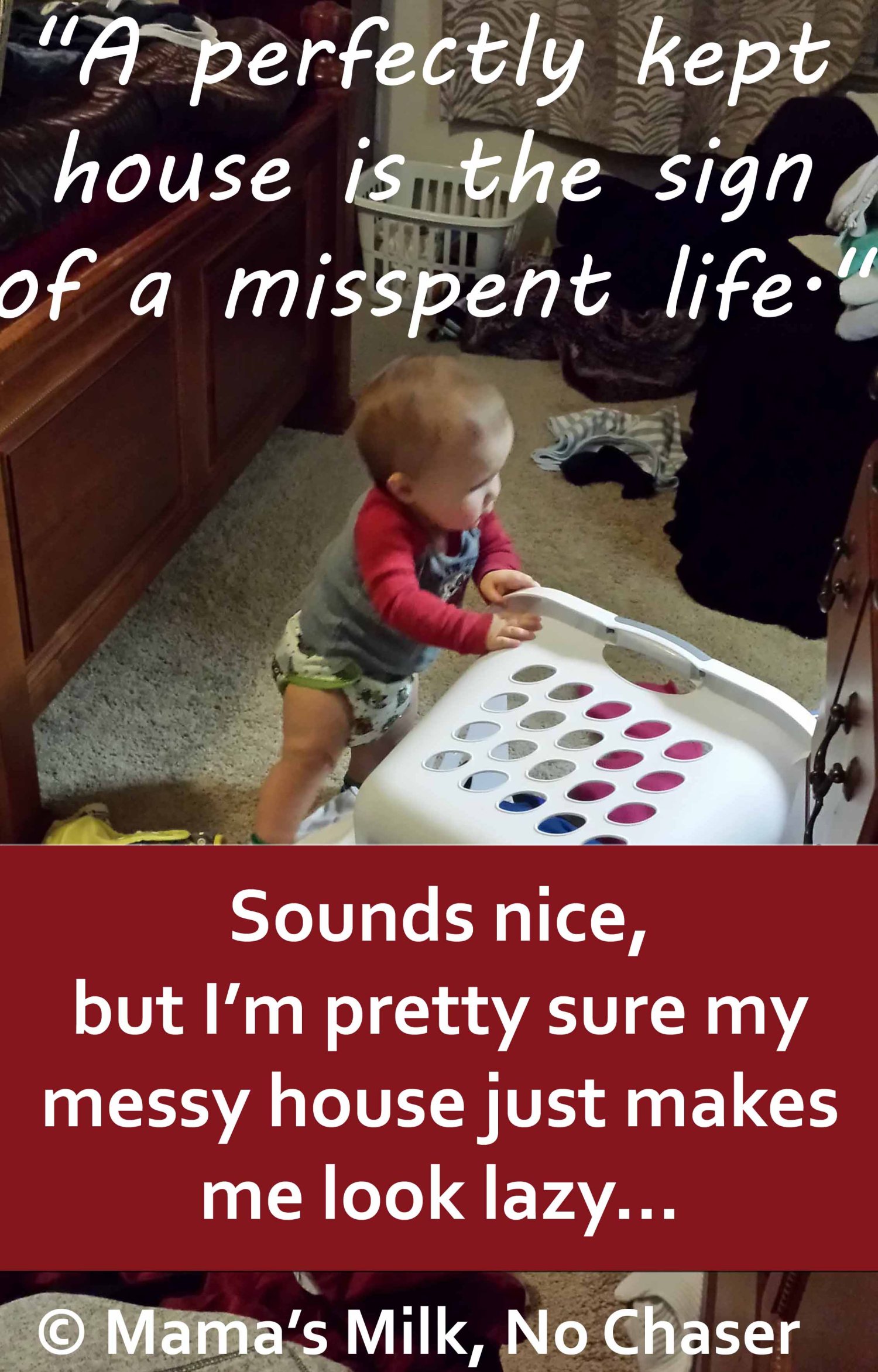 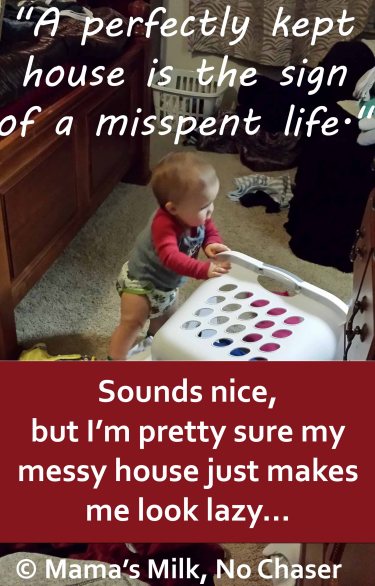 Is a messy house a sure sign that it’s owners are headed for an appearance on “Hoarders” or is there actually some truth to the above quote, especially for stay-at-home parents like myself? Let me tell you a quick story.

Our dishwasher broke just before the holidays. Both sinks, most counter space, and some floor space now accommodate a thick jungle of dirty plates, pots and pans. The cupboards sit hollow and bare, vacant as they were the day we first moved in, as every dish we own has migrated into one of the many indefinitely soiled, Tetris-style stacks.

The Designated Dad and I determined to hand-scrub a certain number of dishes each day until the mess of ceramic and glass fully cleared. This approach worked for, oh, about a few hours — we managed to clean just enough to be able to cook and eat dinner, then those meticulously-scrubbed dishes went right back into the dirty pile as if by boomerang.

Our food was salted by tears that evening, I’m certain.

It took only a few more nights of literally rinsing and repeating until The Designated Dad jokingly (but seriously, because his jokes are never just jokes) proposed: “Let’s just say screw it, throw all of these dishes away, and buy new ones!”

Good idea! But... we could also use that money to simply hire someone to scrub these dishes clean for us, I pointed out. Genius idea! (In the mean time, we stocked up on paper plates and disposable utensils to get us by until the hired dish fairy saves us). 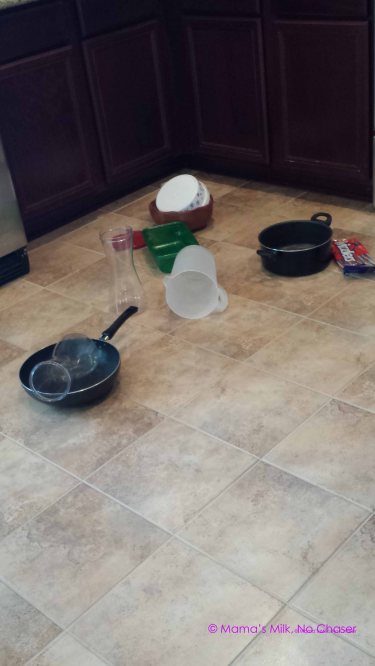 Not the dirty dish pile, but rather, clean dishes spread out to distract MaiTai while attempting to clean.

Why did we seemingly call defeat so quickly, you wonder? Why didn’t we prioritize fixing the dishwasher and set aside time to get ALL of the dirty stacks cleared instead of just “enough for today”? Are we just a pair of overgrown, lazy frat housers? Is it that we couldn’t care less about setting a good example of work ethic for our impressionable son?

No, I’d like to think it was a personal challenge of sorts. A dare to just… you know… let it goooo.

It’s also that I still remember what transpired in my brief (albeit hotly, emotionally-testing) era of actually prioritizing the housework. I need only the shallowest of memory to be sure I don’t want to be in that position again. Let’s take a little trip down memory lane…

My first year postpartum, I tried my Stay-At-Home Mommy best to tidy up the house before The Designated Dad returned from work at 6 p.m. I would rush wall-to-wall in a stressed panic, recovering trails of crumpled-up Kleenex, fluffing depressed pillows, re-lining garbage pails, spraying down the breakfast table in a torrent of insta-sheen chemicals, sometimes even (gasp!) vacuuming… all to maintain the illusion that “Everything’s good! Nothing resembling discord happened here today!”

I wanted him to come home to what appeared to be a sane woman and a smiling baby so perfectly clean to match the acceptably tidied rooms. I wanted to dispel certain facts of life with a baby, like copious amounts of spit-up that must end up somewhere, unexpected projectile baby butthole eruptions that also end up somewhere, and at least one tiny sock wedged in every imaginable crevice and container from the jewelry box to the toolbox. 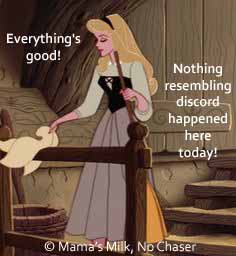 Was The Designated Dad ever fooled? I don’t know. I only know that by 6:30 p.m. the living areas had deteriorated back to their former un-primped states — and I knew it was time for my regularly scheduled episode of Full Wine Glass. (6:30 p.m... that’s a whole ninety minutes past Happy Hour, right?)

Day after day…. wash, rinse, clean up and pick up and repeat. I started to realize that the cycle wouldn’t end. It was never “good enough” and never permanent enough. It was Play-Doh on a wall — it could never truly stick. (My mother-in-law helped us with laundry, cleaning, and tidying for a while, and I’m genuinely grateful for those efforts. But still, the task of consistent cleaning with even just one child in the process of “undoing” the house is a responsibility only sufficiently conquered by a small army). 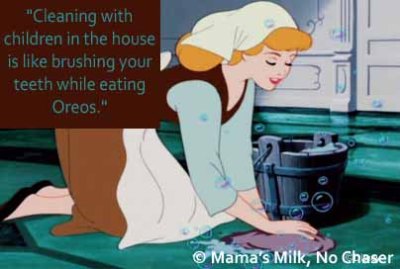 You’re aware of my struggles with postpartum depression and postpartum anxiety, I believe. (When I say “struggles,” I mean the feeling of drowning in a forgotten, isolated lagoon of new motherhood, little by little going under ever more deeply in a seemingly innocuous, almost superficially inviting, quietly-standing, albeit dark and overwhelming pool where the ghosts of other mothers and fertile women floated around in their haunts and whispered sabotaging advice, triggering experiences, false support, inability to commiserate, with bubbles of hope for breath here and there but certainly not enough to fill a lung. No melodrama, it was pretty much just like that.)

I attempted to hide my depression and anxiety behind folded clothes, naked sinks, dusted shelves, and every last stupid decorative item fixed exactly where it should’ve been. My hormonal balance was not where it should’ve been, but it seemed easier to neglect such a thing and fixate on the material instead. Anxiety both overwhelms a woman with her heavy emotions and separates her from them at the same time.

An anxious, nervous mother becomes increasingly obsessed with the tangible things (the furniture, the household items, the chores) to counteract a frustrating misunderstanding of the intangible elements that inhabit her own self (a relentless worry that her baby will die at any moment; that she’ll accidentally hurt the baby; that her baby will be taken away; that her partner may never come home again; that her baby has some symptomless, incurable disease; that she’s a horrible, selfish mother who doesn’t measure up).

So her brain overrides the chemically askew chaos with the compulsion to put ALL the toys away and put EVERY pillow in its expected resting place and have ALL the clean dishes retired back to the cupboards.

No. (It’s my toddler’s favorite word, and I’m officially adopting it as mine too).

When I felt ready, I gave up this self-imposed idea that I needed to be Martha Stewart’s apprentice-in-waiting and began to accept my very well-lived-in, homey home for what it is — thoroughly lived-in and comfortably homey. And guess what else — it turns out that I’m just not a homemaker type (as if I didn’t already know that! I made a human already, you know! I don’t also make a house, but maybe that’s just me).

You know what? Our shelves aren’t polished today because we care more about reading the books upon them than diving in with a feather-duster. Our stacks of dirty dishes could be mistaken for Jenga towers because too many perfect, unrepeatable toddler moments fired up our hearts just as we considered tackling them again.

As I’ve told The Designated Dad more times than he probably cared to hear: I’m a stay-at-home mom, not a housewife! Hisss… meow! (Okay, the feline angst was over-the-top — but you see, this is what anxiety does to a lady!) 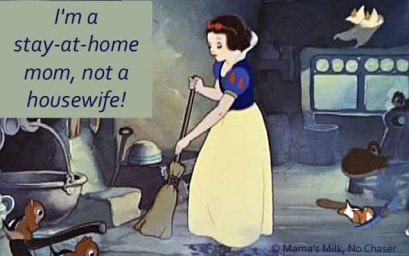 I learned that granola strewn all over the breakfast table by a displeased child is not an emergency. Neither is a dirty diaper long-forgotten in the hallway, rumpled shirts on the stairs for God knows what reason, nor a clogged toilet (when you live in a three-bathroom house, it’s only an emergency if two are out of service).

If one of your roommates is a toddler, there are worse messes lurking unbeknownst to you between couch cushions and obscured by the shadows under your bed. Seriously, I dare you to check your bra for the crumbs that followed you home from yesterday’s lunch with your child at Panera Bread.

I’m more: “Dishes will get done when I need a dish,” and less: “Dishes will be pre-readied in spotless form in the highly unlikely event that a party of eight stops by for a fancy dinner without prior notice.”

I don’t know how many times I’ve told The Designated Dad, “Oh, just put it on the floor for now!” referring to a handful of kitchen trash that refused to be smushed into an overfull garbage can. Trash duty can certainly wait a few hours (or a few days, really). 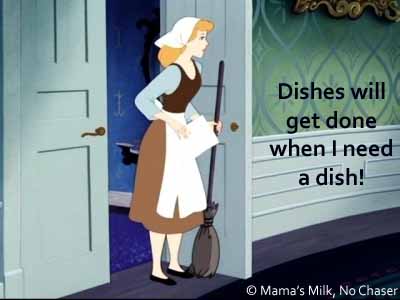 Please know, I’m not saying that keeping (should I say un-keeping?) a messy house is badge of proof that one is a “good” mother, assuming she then has more time to hug, hold, play and talk with her children. Nope, moms who take great pride in their gleaming china cabinets and feel enthusiastic about passing on exquisite homemaking skills to their children have time for being “good” moms, too. Tidy house, tidy kids, tidy tides of life? Hey, good for you, good mom!

However, I am also saying that, for me, chasing around the constantly and seemingly self-rearranging elements of my house with a vacuum and an All-Purpose spray bottle limited my ability to offer undivided, uninterrupted quality attention not only to my child, but also to myself (I’m important too!).

Delaying the house chores is not an excuse for laziness, though. Most of the time it’s simply what happens when one chooses to take advantage of beautiful weather for park playtime instead, or cuddle up in a glow-lighted homemade fort with Curious George books for the whole afternoon… far, far away where those mean ol’ dirty dish towers can never find us…

I’m just admitting that I need to kind of neglect some things in order to chase around my child the way he deserves to be chased, which isn’t with a broom. Only so many things can get done during the day, and it seems that housework barely makes it to last place of the To-Do list on a conspicuously frequent basis. 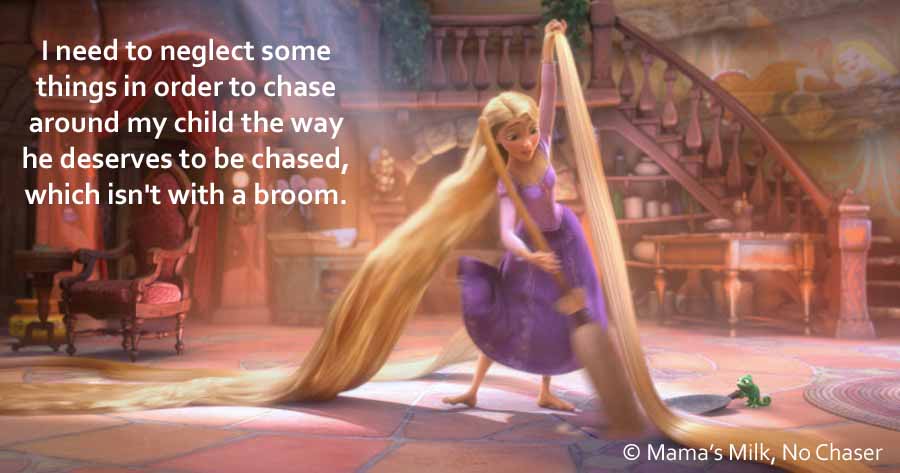 Alas, it didn’t take long, but I realized that my dishwasher is not one of my dependents. My child, of course, is.

I’ll never regret playing with my kid instead of doing housework first because it’s one more coin in the trust and bonding investment jar (teenage years, I’m ready for you!). Be sure, our kids are subconsciously saving up.

My son has verbalized only two full sentences in his two-year-long life, neither of which were “Thank you, parents!” But when he plants a milky-wet kiss of gratitude on my lips after I let him nurse (despite begging him for five minutes to drink water instead… Read more about nursing aversion here), or when he burrows his whole head into the crook of my neck and wraps his too-short arms around my face as I scoop him right up in the midst of scary situations, I know he genuinely, whole-heartedly means “thank you, Mama,” even if he can’t say it yet.

Thank you for what you’re doing, because it’s something you did instead of many other things. 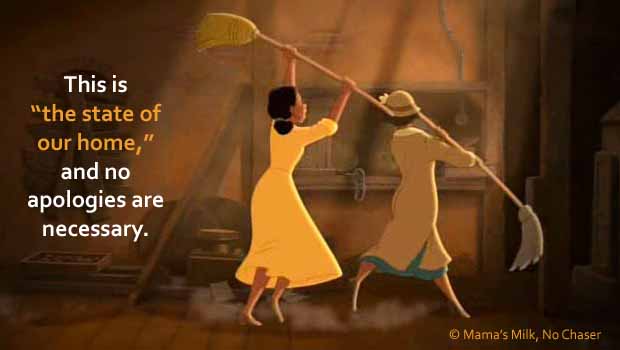 Who knew that playing and living with a toddler in a house that looks and feels like it’s played and lived in by a toddler could make a mother so happy? I didn’t, but now I do.

I’ll be happier when those dish fairies pay us a visit, and when I get to the point when I can stop apologizing to visitors for “the state of our home” as if they didn’t know we’re, like, sleep-deprived parents of a bed-sharing two-year-old.

But for now, this is good. Dirty dishes, happiness… it’s worthy of Walt Disney magic, and it’s all good.

Via Snow White and the Seven Dwarfs, Disney