I was so done with the world of new motherhood.

I was distancing myself.

I was tired of being a ‘stay at home’ mother. Tired of caring so immeasurably much about my children that my heart is always on the brink of hurting. Tired of having to choose between things that make me happy that don’t involve my children, and things I must do (or want to do) as a mother. Tired of being told it doesn’t have to be that way. It’s hard to make changes when you’re so tired.

I was tired of being so out of touch. Tired of every day that feels like the same fucking day as the rest. Tired of the isolation from adults. Tired of waiting for “when the kids are older…” because “then I can…” or “then I will…”

I was tired of being told “You’re more than ‘just’ a mother” and “But you’re so smart and talented, why are you ‘only’ a stay-at-home mother” and “you have so much to offer, do you think your kids are old enough now that you can start working” as if I don’t work, and “you’re meant to do more than just be a mother,” but is mothering limited to a state of being or is it also a perpetual state of doing?

I was tired of non-parents out-parenting me. And not being able to defend myself because that would be rude and I’m a mother now so God forbid. Tired of explaining to my friends without kids that I’m tired. “Oh, they haven’t taken their nap yet?” Oh honey. Even if they were going to nap, it wouldn’t help. We are so far beyond the healing powers of the naps taken by singleton children in the first year of life before they realize messes can’t be made in one’s sleep.

I would tell my childless friends how motherhood is so great (it is) and I love it deeply (I do) but I usually left out the rest. The complete picture. I didn’t wish to frighten them. And I learned my lesson the first time I opened up about the struggle; I received raised eyebrows, walked away hanging my head with the news of my failure to be a mother who should always love mothering. I learned that lesson many more times when childless friends whispered their mockery “I’ll never be a mother like that” about mothers to whom I could relate, with whom I share the unspoken camaraderie of child-raisers trying to appear as though their shit is held together, hoping no one notices the oft-humiliating struggle but going home to cry that no one cared enough to help or that they couldn’t bring themselves to ask for it.

I was tired because when it wasn’t a crazy mess on the outer edges of the tornado, havoc and mayhem and screaming and crying meltdowns and everyone was hungry at once and in need … when it wasn’t days, weeks, months of that — it was a long ass string of the same un-inspirational crap. No, literally, crap. I’m an expert in cleaning up crap. Deducing the status of a little human’s health from the appearance, amount, frequency, and delicate texture of their crap. Wiping crap off butts, diapers, their clothes, my clothes, a spot that just nearly made it into the toilet, the washing machine, inside the child’s mouth where crap hands went, the carpet (who am I kidding, I pretended that didn’t happen and just fucking left it there).

Like I really thought by then, six years into motherhood (because pregnancy counts), I’d be taking regular showers uninterrupted during the week and having the mental wherewithal to remember to brush my teeth. Or scheduling a dentist appointment and having all the normal feelings about that instead of looking forward to the peace, a kid-free hour like a spa day, go ahead and take your good ol’ time drilling those cavities, please.

And my house is a damn mess (I would really call it a barn to paint an honest picture) so I’ve been organizing.  Or at least making a mental plan for organization, whenever that will happen depends on when the children will stop undoing every junk-pile I pick up and/or stop asking for things about quintillion times per initially requested thing.

So the house is a mess and there are tons of clothes to sort through, as well as toys. These kids grow like snakes shedding skin. Their clothes fit for like 3 months then I have to decide if I’m going to be that mom who starts cutting the seams so they last longer (and I decide yes, because life’s too short to not be that mom and that mom has the best ideas anyhow).

So I have all these baby clothes and baby toys I’ve never really examined too closely, much less shed a tear over. But a year ago I got hit solidly with this brick of truth: the baby days are behind us — really behind us forever — and I need a safe place for resolve. Everything is moving forward so quickly and I just want to press pause on my children long enough to catch up. The only thing I’m actually catching is that hard lump in my throat that appears when I get to the corner of the closet with the little baby things. Things that are no longer for my own babies. Because I don’t have babies anymore.

I don’t have babies anymore…

I was reminded regularly. “Stopping at two, huh?” “Oh, only two?” “Ha, two’s about all you can handle huh?”

And what would I do with these baby things? Toss, donate, turn into a quilt, save for posterity? Would I shed them without thought like my little snake-skin children did? How could they possibly be so unsentimental? Or perhaps they are better at detecting what they’ve outgrown than we think.

Maybe I could learn a thing or two. Children are gifted to us as teachers, after all.

My home office is full of birthy things. Around me, hung and propped on walls and shelves are relics from an era so seemingly long ago in my own life. Markers from years of rabid collecting and researching and nest-making. Over the past year, I looked at it all and thought to myself, What am I still doing here? 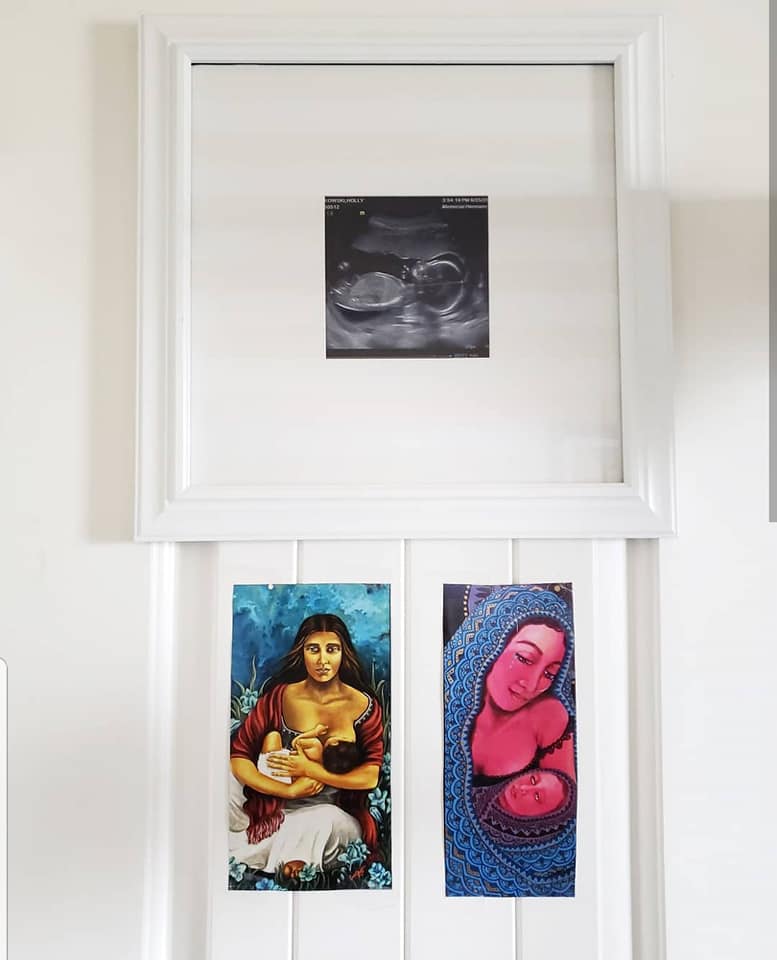 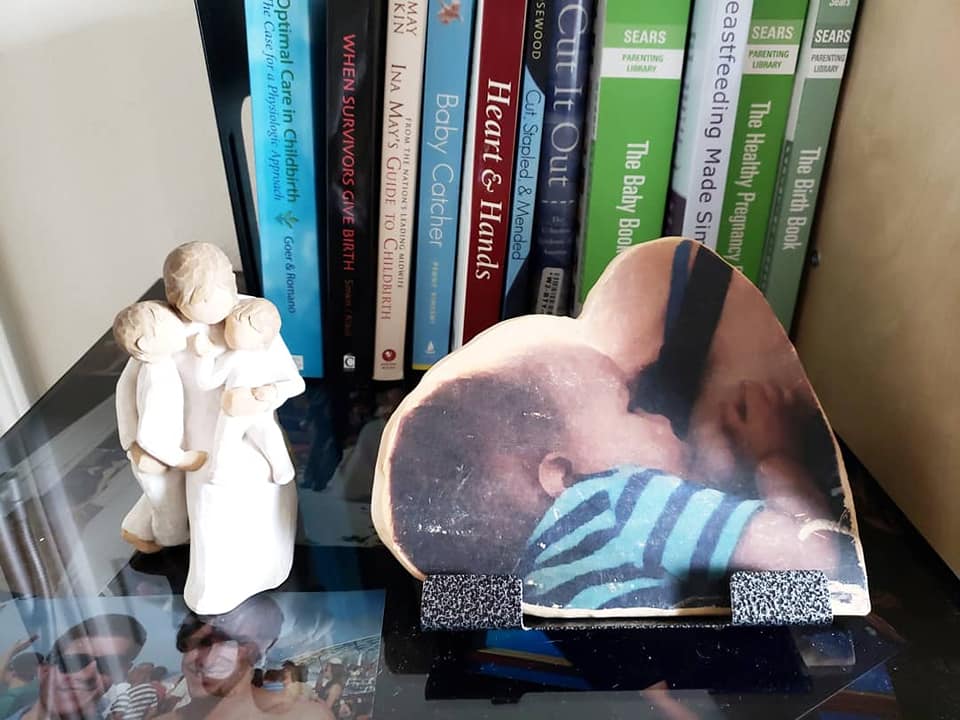 So there was a lot of grief brimming. I’m not sure how much. I realized perhaps I’d only truly know by distancing myself from the new motherhood world, so that’s where I went.

For the past year of creating that space, I enjoyed the experience of relief. I limited my blog posts here to once a month, down from once a week. I seriously considered not renewing this blog for the past few years (it costs $208 a year to keep it running — donations from kind sponsors are very welcome… just saying!). I stopped marking every and all parenting and baby related event on my calendar. I took a hiatus from my directorship with Saving Our Sons. I pushed off my plan to work in the childbirth field.

I focused on figuring out what being a mother means to me instead of what others expect me to make of it. So far I’d say it’s the most concise and literal descriptor of my relationship and connection to my children. It now feels odd to say I ‘mother’ my children or I engage in ‘mothering.’ They don’t ‘child’ me or engage in ‘childing’ and they don’t ‘brother’ each other, so. There is something more to ‘mother’ than a series of actions-reactions between partners in the maternal-child duo. I also like to think of ‘mother’ as the mysterious vault that holds promise of a woman’s blooming potential for nurturing and wisdom… not a bookend that closes off other life categories.

Eventually the time came when I could accept what I already knew in the bellows of my gut. I’m surrounded by birthy things for a reason. I’m attracted to everything motherhood like one clings to the comforts of childhood nostalgia, and no matter how much elbow room I try to squeeze in there, I honestly can’t help myself.

I’ve determined that this is where I need to be, and there is no ‘only’ or ‘just’ about it. So much time spent feeling restricted by motherhood when it was in fact a key to my freedom… how interesting that unchecked language like ‘only’ and ‘just’ spoken by others could manifest such a different reality.

Women are curved and rounded like a bowl ready for filling. Whether you pour motherhood or aspirations or interests or talents or labors inside, they all settle and expand like liquid. Whatever a woman takes on she settles it, expands it, and gives it life to its fullest capacity.

Everything changes when a woman becomes a mother, but she is never less than she was before. She cannot be ‘just’ or ‘only’ a mother; a mother is not a minimum standard. She is doing and being enough without carving out space for the rest that will surely come in time.