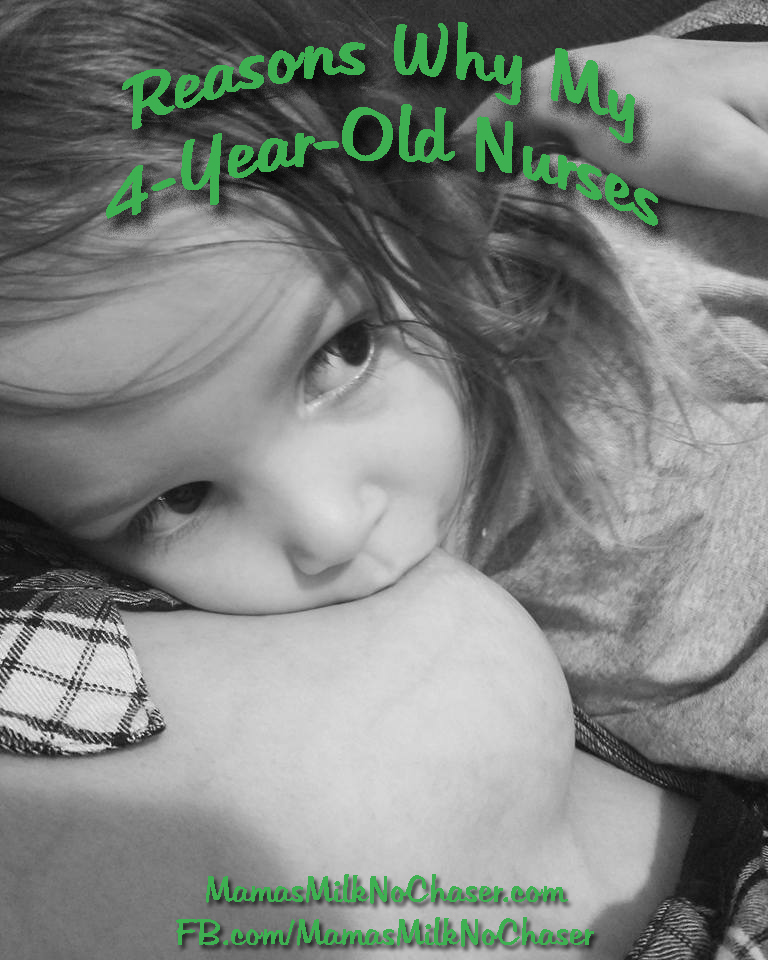 Reasons why my 4-year-old nurses — according to him:

Obviously, breast milk tastes good. I’ve heard some adults who breastfed until school age say they have no memories of actually breastfeeding, but they’ll never forget the sweet taste.

At more than 3 years old, MaiTai weaned briefly in the last trimester of my last pregnancy. I really thought he was done. Then my milk returned in full force after baby Julep’s birth and so did his remembrance of the sweet, sugary goodness.

Of course he wanted to test it out, see if it had changed.

Compliments to the chef. 😀

Sometimes he’s clearly joking around when he asks, especially if he asks at a time when he knows I typically decline.

He’ll have a good giggle after mimicking a baby (or perhaps himself as a baby) giving cues to nurse. He laughs, realizing he is now a ‘big boy’ yet also in this moment ignoring the fact that he still nurses, too.

Then sometimes when he does nurse, he cracks jokes between sips and points out the silliness of how breastfeeding works:

“How do you make all this nanoo? How is there SO MUCH? Haha! It’s just ALWAYS THERE! Even after we drink it all!”

Well, there you have it!

Reasons why my 4-year-old nurses — according to me:

For many school-aged nurslings, a nursing session is a moment to decompress and process. It’s a Band-aid. It’s a bedtime story.

As for MaiTai, he doesn’t ask to nurse to help manage ‘big feelings’ anymore — at least not as they first hit him. He doesn’t nurse to sleep, after sustaining an injury, or when upset. If he did, it’d be totally okay with me, but he’s simply outgrown that need.

Whereas his baby brother finds complete solace on the breast, MaiTai has been capable of handling messy feelings without nursing for a long time now.

When he does ask to nurse, he’s often in a great mood and playful. (Sometimes rather goofy and rambunctious in fact, which causes me to insist for calm before we can nurse).

So it seems nursing is a hug.

At this age, nursing MaiTai isn’t hectic or disorganized (except when the two rascals make a plea for it in tandem). It’s deliberate. Again, like a hug.

2). It’s a bonding activity for him and his baby brother.

Continued breastfeeding seems to have eased MaiTai’s transition to being a brother. I think he likes sharing ‘nanoo’ with his baby brother because it’s special to him.

He can’t help hovering around baby Julep when he nurses. Kissing him, cooing at him… and of course squeezing him tight, tickling him, and various other things that turn me into a mom referee — “Pleeeease be gentle, I know you love him, but give us space… Space, please!!”

So sometimes it ends up easier to just let them both nurse at the same time. He says he likes it best when they nurse together (though I don’t do it often because it can get a little overwhelming). Whatever gets them to keep their hands to themselves…

It helps him feel as adored and beloved as his baby brother.

Since adding another child to our family, my attention has been unavoidably split. A quick nursing session is one way MaiTai can receive one-on-one attention with me. Think of it like this: He’s perfectly capable of walking but he often requests to be carried by his father. Same idea.

I believe he might have completely weaned by this time if he were an only child.

As a homeschooling and non-working mother, I’m with my kids constantly. MaiTai doesn’t take a break from us to spend the afternoon in daycare or preschool. He’s present almost every time Julep turns to the breast. He was around for all the cluster feeding, every announcement of “I’m about to nurse Julep to sleep so let’s be quiet now,” and so on.

It’s an unavoidable, normal part of life that he wants to be involved in.

4). This is the aspect of attachment he feels compelled to retain.

Some 4-year-olds (and beyond) have developed a special endearment to their blankies, a thumb, or want to be rocked when distressed. Some have abandoned these markers of immaturity long ago, but retain other aspects of babyhood. We don’t completely lose the need for attachment, it merely manifests again in other ways.

MaiTai has grown up in every possible way in the past 4 years. I can tell by his increasing size, his hair heading to the floor, his frequent need for bigger shoes, and of course, by the way he continues to change his approach to breastfeeding.

Some days I do wish he’d wean already. So many episodes of nursing aversion, feeling touched out, feeling swamped, wanting my bodily autonomy back. I’m so tired.

You know what would be even more tiring? Attempting to hasten his weaning!

I feel like the process would deserve a great deal of conscious attention, and for what? I assume one day I’ll stop and wonder how long it’s been since he nursed and realize he already weaned without me noticing.

If weaning becomes an ‘event,’ I imagine he’d ask why Julep can still nurse but he cannot. And I wouldn’t be able to think of one good enough reason when he looks to me for my answer.

When I look back on these nursing days, I’m sure it’ll all seem so silly. Having to explain to others why or how we’re breastfeeding, for how long, where, and so on.

Right now my 4-year-old is just that… 4. Decades removed, these will still be his baby days. And incidentally, his nursing days too.

Breastfeeding is still working. Why fix what ain’t broken?

Next read: “(Incorrectly) Assumed Reasons Why My 4-Year-Old Nurses“