*BEFORE YOU READ: This is a post about human placentas. It includes photos. If you’re not accustomed to seeing a real placenta or don’t wish to see one, you might consider skipping this post.*

*All uncaptioned photos below are credited to Stephanie Shirley Photography*

Did You Know These 22 Placenta Facts?

1). The placenta is the only disposable organ (not the same as vestigial).

2). It’s also called the baby’s “first mother,” “the afterbirth,” “tree of life,” “the child’s pillow,” or “mother cake” in reference to its origins from the Latin word for cake. The Old Testament referred to it as the “External Soul.”

3). Delivery of the placenta is considered the third stage of childbirth, after laboring until full dilation and delivery of the baby.

4). According to Grace For Moms: “The placental tissue is shaped like a disc. The disc is made up of individual ‘cotyledons’ which are smaller circles within the larger circle that abut against each other. It is brownish red with a texture that can only be described as ‘liver meets berber carpet’. When the placenta lays flat, it appears to be one solid unit. But when you hold it up by the membranes and it forms its natural shape, you can see how each individual unit fits together.”

7). The National Institutes of Health called the placenta “the least understood human organ but arguably the most important.”

8). The placenta performs a number of vital tasks including delivering nutrients, hydration, antibodies, and oxygen to the baby. Amazingly, the mother and baby never mix blood.

9). A transfer of antibodies through the placenta gives the baby passive immunity for the first few months of his life.

10). Placentas are unique to each mother and pregnancy.

11). Every minute, 20% of your blood supply filters through the placenta.

12). It acts as a gland by secreting a ton of powerful hormones, including ones that stop the menstrual cycle, increase blood cell production and metabolism, and keep the mother’s body from rejecting the baby. Hormones released with its exit from the body also signal the shift to making breast milk.

13). Different cultures have interesting rituals involving the placenta. Some ceremoniously burn it, bury it in earth or at sea, eat it, perform a funeral for it, mummify it, use it in medicine, steep it in tea, plant it with a tree, observe it to predict a baby’s future, decorate jewelry with it, consider it the baby’s deceased twin/older sibling, and so on. The history is too rich and fascinating to possibly cover in this post alone!

14). Once it has been delivered, modern Westerners generally see the afterbirth as a meaningless organ — an afterthought. Placentas left unclaimed by parents (in hospitals, for example) may be discarded, used for research, or sold to cosmetic and pharmaceutical companies.

15). Lotus Birth has gained some popularity in Western culture recently. This is when the umbilical cord is never separated; the placenta and baby remain attached until the cord naturally separates within a few days. The practice was developed by an American woman in 1974.

16). Most mammals routinely consume their freshly-delivered placenta, and humans have eaten placenta for thousands of years.

17). A baby can send stem cells through the placenta to heal damaged organs inside his mother.

18). Unlike other organs, the placenta develops and functions without being connected to the brain (it doesn’t contain nerve cells).

19). Created from the fertilization of the sperm and egg (not the mother’s body alone), the placenta could be considered like the child in that it’s a creation credited to both mother and father. But given the fact that half the placenta is comprised of fetal cells and the other half maternal cells, perhaps it’s less “hers” or “his” and more “the family’s.” Jury’s out on this one?

20). A little trivia from elementary science class: Humans are placental mammals, which are different from egg-laying mammals called monotremes and pouch-bearers called marsupials.

21). A recent study showed that certain creases in the placenta can suggest greater risk for autism.

Our doula (who I humbly dub ‘placenta expert extraordinaire’) indulged us with a biology lesson on the placenta after it was separated from Julep via cord burning an hour post-birth.

I ran my fingers over the cord (which was gooey, thin, and cold by now) and felt the bumps and grooves of the organ.

She explained how the ‘mommy side’ is rough because those pieces attach to the uterine wall. When splayed open and back again, the pieces should all fit together like a puzzle. Missing pieces might indicate retained parts in the uterus (the meat of my placenta was thankfully intact). This side is lobed and moody-looking.

The ‘baby side’ was smooth, the perfect pillow for a preborn child, and produced the cord from its center. ND stretched out most of the amniotic sac, what was once the water-filled balloon where Julep lived for ten moons (the rest was still inside me as trailing membranes). Though the sac membranes were once tough in their functional state, now they seemed fragile and terribly delicate.

She said the ‘pizza slice’-shaped piece was older than the rest, as indicated by its grayish color. I can’t remember exactly why she said that would happen, but I think she said it may have separated from the uterine wall a while before the red areas. (Don’t quote me on that. 😛 ). 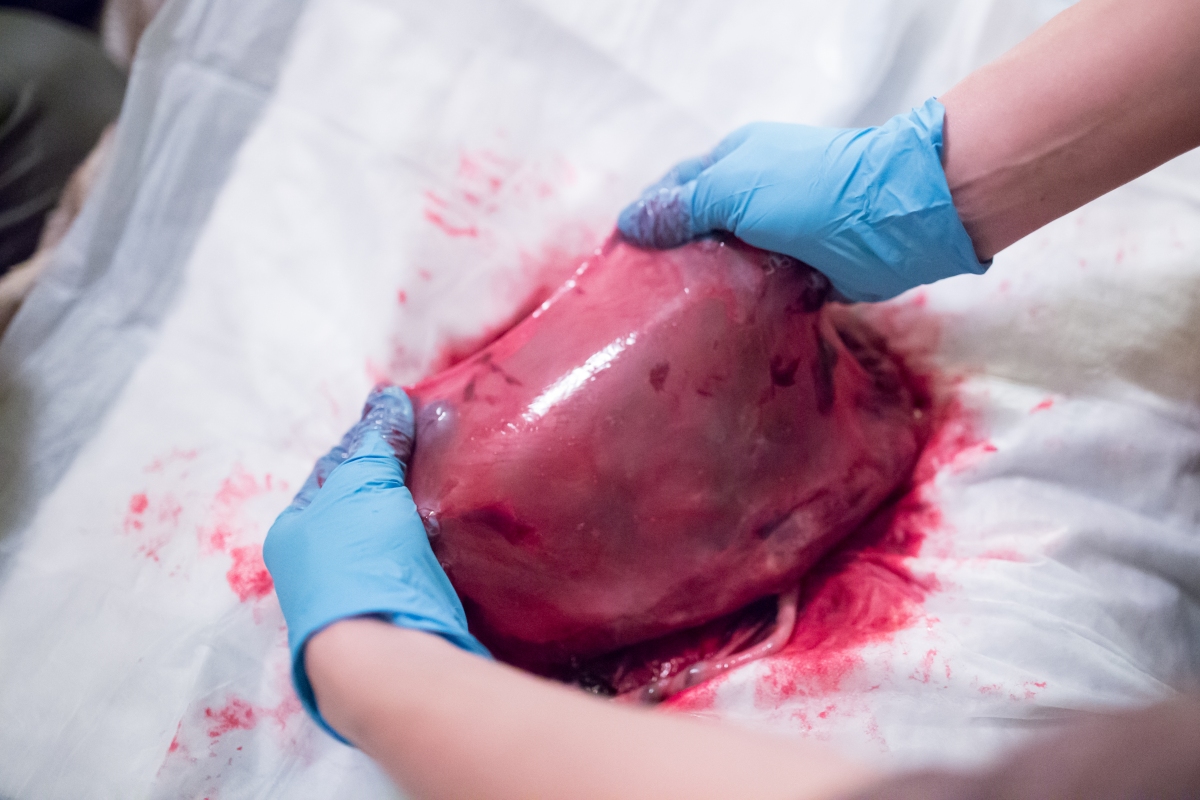 “[T]he placenta seems like an inactive, amorphous lump of bloody flesh. But it is far from inactive. Even after its delivery, it lives for minutes longer, as the umbilical cord continues to pump nutrients from it to the newborn. The placenta is the dedicated, underpaid employee that continues to work overtime.” – Suzanne Nguyen, biologist, The Atlantic

Placenta printing is an artistic way to capture the beauty of the placenta. The print makes the ‘Tree of Life’ especially apparent and highlights its uniqueness. You can use paint, placental blood, or food-safe dye (which is best if you’re also encapsulating).

My doula made three stunning prints of Julep’s placenta before leaving our house post-birth. 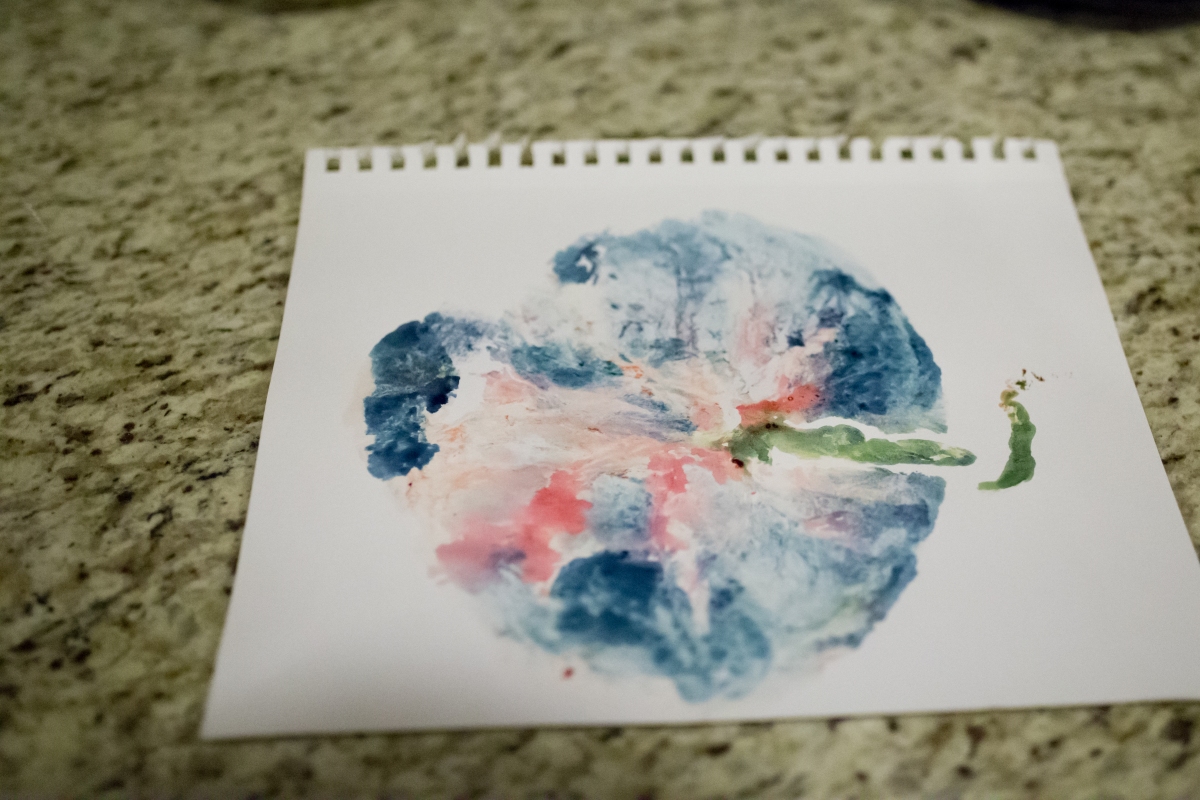 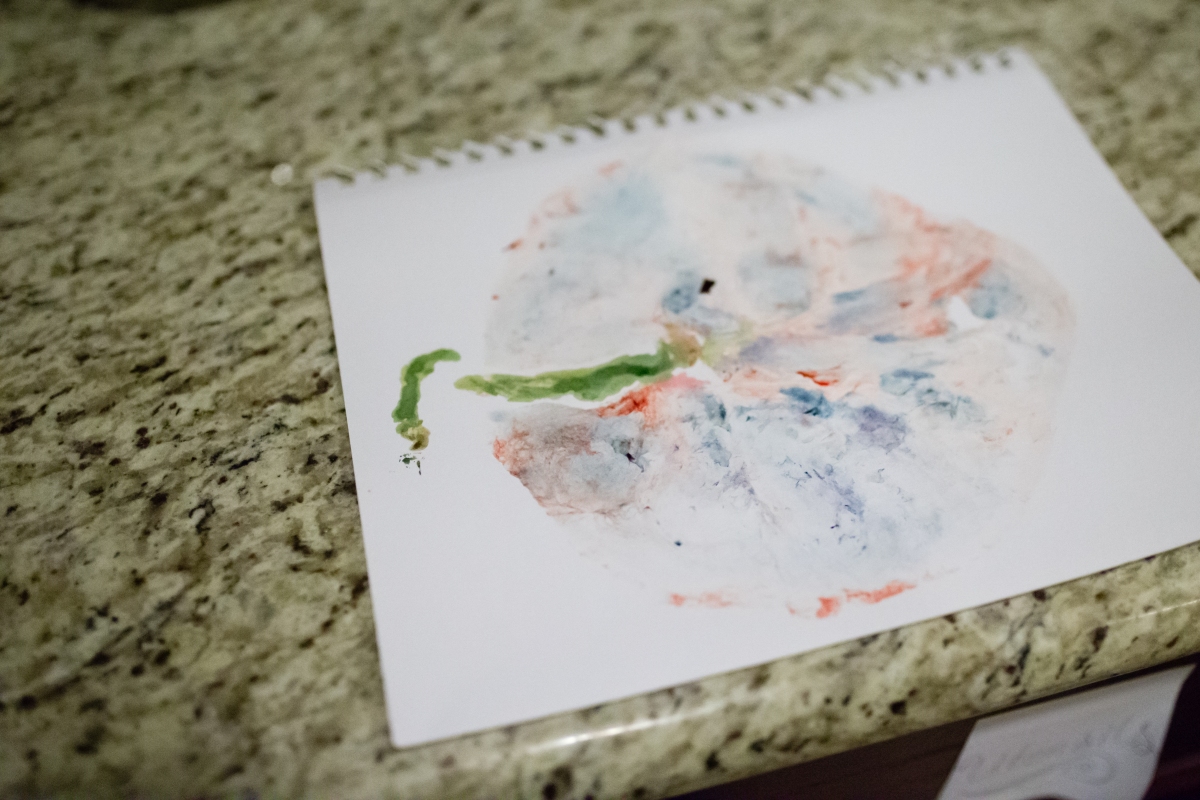 Yes, consuming your own placenta can be considered vegan. It doesn’t harm any animals (including yourself) and you can purchase your own vegan capsules made with vegetable glycerin. The party to whom the organ belongs (you) has consented to its consumption. Many vegan animals (such as deer) eat their afterbirth, too. Think of it like this: is it okay to bite your own fingernails if you’re vegan? Basically, if you’re vegan, it’s likely more of a lifestyle choice rather than merely a diet plan. You get to define how you want that ‘label’ to look.

No, consuming your own placenta isn’t considered cannibalism. Most dictionaries define cannibalism as the act of a person eating another person’s flesh, usually after they’re dead. So, it would have to be sourced from a foreign body. Clearly this doesn’t apply to ingesting a medicine made within yourself.

Now that that’s out of the way, we can move on to the fun stuff… eating placenta! The organ can be consumed in various ways: steamed, desiccated (dried) and ground for pills; blended into a smoothie; steeped in a tea; made into a tincture; etc.

Purported benefits of consuming your placenta:

Here is one list of studies that support these placenta uses. I’m sure there is just as much research claiming no significant benefits. Truth is, very little official investigation has been made into the potential health-influencing mysteries of the human placenta. It’s just not a corner of curiosity people want to throw fund money at scientists to explore. Not yet, at least…

For now, in addition to the research that has been done, the positive anecdotal outcomes may speak for themselves. 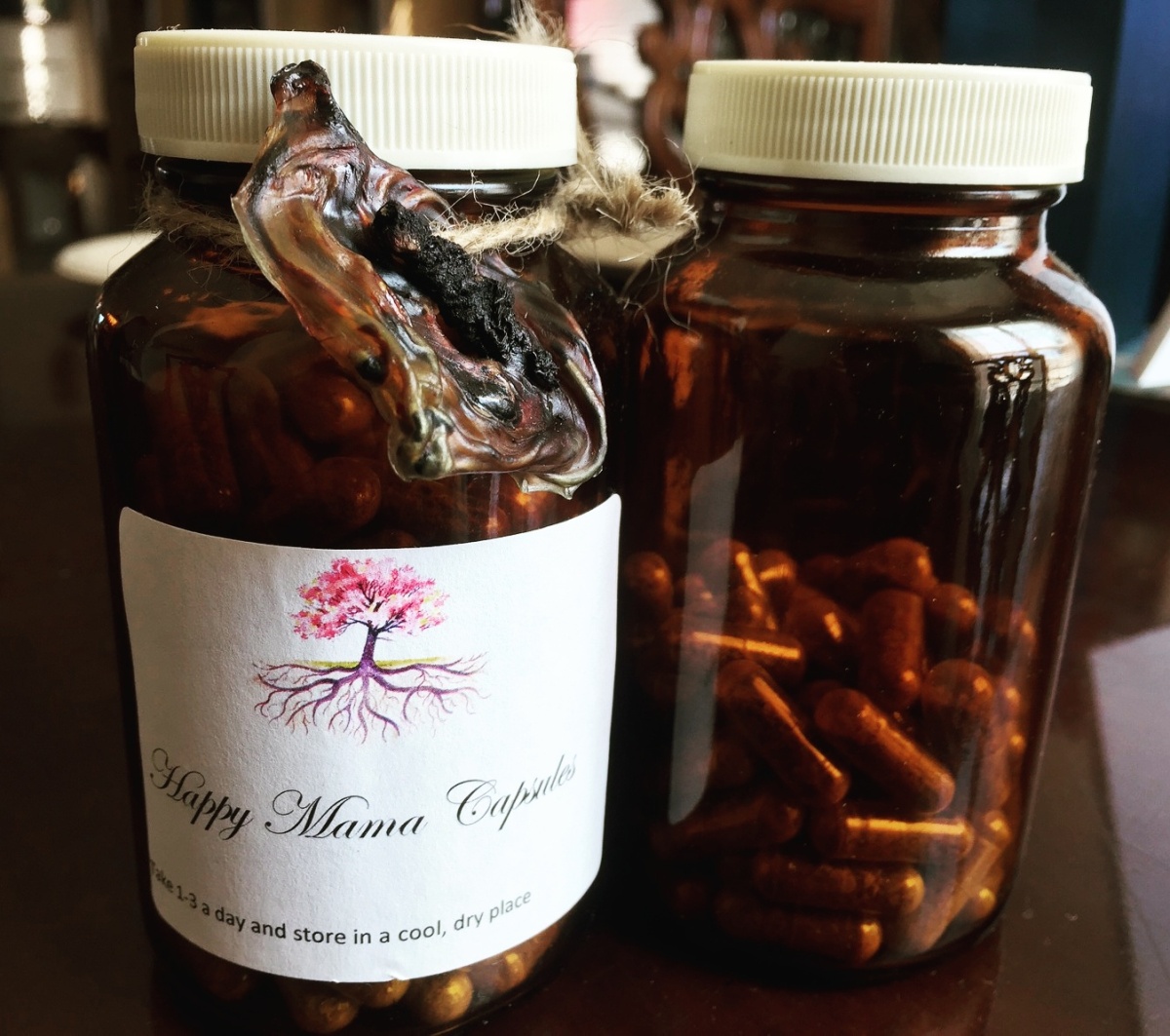 My Experience So Far

I started to feel sad and blues-y (ah yes, hello baby blues). Seeing how MaiTai aged so much seemingly overnight made me feel ‘homesick,’ and imagining some disconnect between us that may or may not actually be there. Everything was changing. I felt so weepy.

My doula contacted me with great news, though — my placenta pills are ready for pickup!

I woke up depressed. Overly annoyed that the house is a mess. Wanting to cry. A certain recognition now — baby blues. (See ya later, birth high — I’ll miss you…). It felt like a hormonal sadness; not genuine. The emotions manifested in my body too, and I felt physically sore for the first time since hip tightness during labor.

I got my pills and TDD noticed they were in two different sized capsules. Apparently the capsule manufacturer intended to or ‘accidentally’ screwed us over. The wonders of the retail industry…

Anyway, I took one of the smaller pills. I was delighted by the lack of any noticeable smell or taste. Within two hours I noticed I was no longer weepy. Like it just… dammed up all the sadness.

I was feeling annoyed and tired again when I woke up around midday. I took one of the smaller pills before having breakfast. Not much later, I had a good amount of energy and we all went for a stroll.

I took another small pill a few hours later. After feeling cold all day, I began to get sweaty and hot. I felt jittery and buzzy, like after a few sips of a smooth margarita. But I also noticed a burst of motivation and liveliness. I imagine it’d be like two strong cups of coffee for a person uninitiated with the joys of caffeine. It was a little much!

For the next two weeks, I decided to stick with one small pill per day. TDD was still on paternity leave and was able to help out with the kids and house chores. I felt like the one small pill helped manage my shifting hormones while giving me only as much extra energy as was necessary to recover, rest around the house, and care for the kids — with a feeling of contentment and general well-being instead of riding a hormonal tidal wave.

When TDD returned to work, I took over the daytime responsibility of caring for the kids and house solo. So I bumped up my daily placenta dose to one large pill or two small ones, depending on the day’s activities. On low-key days and weekends, I will try to get by on less.

I feel a bit hoard-y with this limited number of irreplaceable pills, but I know using them during this immediate postnatal time may give me the most bang for my buck. As I learned after my first pregnancy, postpartum depression/postpartum anxiety is no joke!