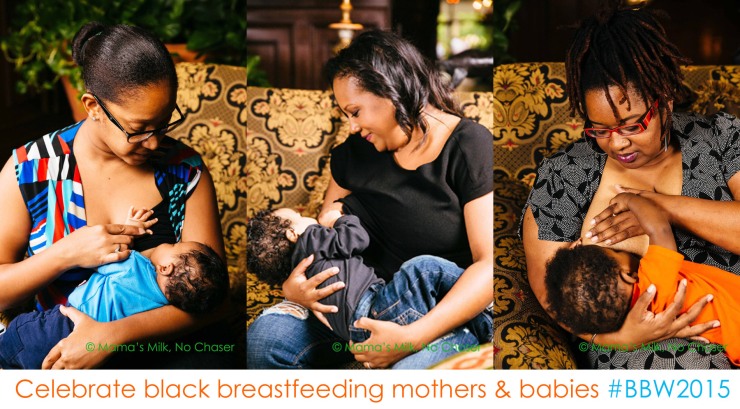 There are many things I didn’t get about the history of Black Breastfeeding Week, which runs from August 25th-31st. To my credit, I can barely keep up with the history of breastfeeding in general (I mean, the practice does date all the way back to the beginning of mammal-kind).

Note: Before I continue, please be aware I’m no expert in racial discrimination and though I try my best to overcome my own ignorance at any opportunity, I’m a work in progress here. So I ask for gentleness if I’ve unknowingly represented cultural inaccuracies; my heart is in the right place. ❤ 🙂

I can’t understand why Black women have a harder time breastfeeding than any other race.

This is because as a White woman, I’ll never be able to step in those shoes. But no matter what I cannot grasp through firsthand experience, the facts still speak for themselves: Black women have it harder.

They’re doing an impressive job overcoming unfair disadvantages, as evidenced in part by the recent breastfeeding rate increase among Black women. Still, a marked disparity persists between the races’ infant feeding practices. Studies, interviews, and basic observations show most do want to nurse their babies, though.

I can’t understand the feelings shaken up by a great-grandmother talking about enslaved American wet-nursing “back in the day”; or knowing by heart my descendents’ accounts of serving under force as wet-maids for slave owners’ children, they putting their little wanting faces up to chests leaking milk meant for the nurse’s own babies, many of whom died as a result of (forced) maternal neglect.

My own “back in the day” is linked to the enslavers themselves, the ones who tore babies away from their mothers and replaced them with little strangers reminiscent of their masters, hungry for all they had to give.

It should swell the White heirs with disgust, shame, and embarrassment. Embarrassment is icky, yes — but we can all agree “icky” is incomparably easier to swallow than a long legacy of nursing without negotiation.

I can’t understand looking for help and finding that the vast majority of experts in the field are not members of my race.

Only a small number of current lactation consultants and IBCLCs are Black women, which puts those who need access to resources the most at risk of feeling misunderstood or unrelatable. Though the recommended proportion of IBCLCs is 8.6 per 1000 births, there are only 1.8 IBCLCs per 1000 births in states with a high Black population.

I can’t understand knowing exactly where to seek help, only to find out help won’t come to my part of town.

For a time, I relied on support at La Leche League meetings, which are arguably the most well-known source of breastfeeding community help… but I’m told these meetings (as well as general lactation education classes) are less regular or perhaps even absent in the most Black-populated areas of the nation.

Additionally, the Center for Social Inclusion found “[i]n 2008, only a little over six percent of OBGYNs [who could educate prenatally about the importance of breastfeeding] were located in rural areas, and in 2010 about half of the counties in the United States lacked even one practicing OBGYN,” plus Baby-Friendly Hospitals (those designated with commendable breastfeeding policies) are scarce in similar areas.

Aisha Zakia is studying to become a lactation consultant.

I can’t understand the deep-set cultural need to measure the opinions of one’s elders, in-laws, and church authorities as weightier than the science of current medicine and health recommendations.

Though, my lack of experience here doesn’t render the power and importance of strong ethnic tradition invalid. Is it time to find a way to honor these instincts by allowing some bridge between?

I can’t understand what it’s like raising children in a culture that almost mandates its new mothers to breastfeed by threat of stigmatizing them as outcasts if they break this familial rite.

Infant feeding pressures among Blacks can swing the other way, too. This apparently is the case for Black women in many African countries, the Middle East, Haiti, Latin American countries, and the Caribbean.

I can’t understand having neighbors and lawmakers who want me to feel like the lives my race’s babies “aren’t as good” or “aren’t worth as much.”

I know about Ferguson, but I don’t know it like my Black friends do. It would be strikingly offensive to claim I could.

The supremacist attitudes of many aren’t spontaneously triggered in moments of national drama; they begin where new life does. Babies of the oppressed are the first and constant recipients of mistreatment, whether direct or indirect.

Kimberly Sears Allers wrote her thoughts on what Black Breastfeeding Week is all about:

It’s about that high-ranking WIC official who said directly to me, when explaining why there were no breastfeeding peer counselors in her office (despite having the funding to do so), that ‘most of these women don’t care about their babies, anyway.'”

I can’t understand facing single motherhood supporting children on one income — a scenario not exclusive to Black mothers but evidently a widespread reality in many predominately Black communities.

With a mother holding down a full-time job or several jobs as the sole provider, the integrity of a breastfeeding relationship is greatly threatened not only due to increased time separated but also many employers’ inappropriate pumping policies and maternity leave allowances.

The Center for Social Inclusion states that Black women are more likely to work in service industry jobs (28% of Black women versus 20% of White women) as opposed to professional or managerial positions. Service workplace schedules are known to be less flexible and less accommodating to the needs of pumping mothers, and women may not request policy changes for fear of losing their jobs.

I can’t understand knowing my child lies at greater risk of becoming a cautionary health statistic due to common risk factors shown to affect my race.

The infant mortality rates for African American infants are unacceptably high. We know that exclusively breastfed babies are much less likely to die of sudden infant death syndrome, which is not only more prevalent in males but also in African-American (as well as American Indian and Alaskan Native) infants.

“Systemic racism in America is negatively impacting the health of pregnant black women by creating stress overload on their system which is affecting the health of babies. Black babies are being born too soon and too small, and lack the option of being breastfed, as result of stress.” – Shafia M. Monroe, “Systemic Racism”

If mothers aren’t breastfeeding long enough, often enough, or at all, they and their babies may be easier targets for epidemic health conditions like those listed above.

I can’t understand living in an area where formula is aggressively marketed to my income bracket or to my race specifically.

This is the reality for lower-income families and those dependent on WIC assistance. Other barriers to equal opportunity of feeding choice include: baby supply stores that provide breastfeeding-related items tend to avoid Black neighborhoods; the cost of help from an independent lactation consultant is prohibitive for low-income families; and after WIC approves free formula, the cost of breastfeeding supplies coupled with lost time at work either pumping or clocking out to nurse makes the decision to buy infant food at a grocery store seem like a no-brainer.

“In general, breastfeeding in the United States has only in the last 2 decades (give or take a few years) been given the major societal push that it has experienced. Prior to this, it was seen as something that mostly poor families participated in. In a way, purchasing infant formula was looked upon as a status symbol. If you could afford it, your family had “arrived”. In the black community, it was done in a few families as a means of survival. Formula wasn’t (and still is NOT) cheap, we had discovered finally that canned ‘sweet milk”’was not good for babies, and we needed an alternative. However, the breakthrough that is WIC emerged and virtually no one was purchasing formula at full price.”

I can’t understand why hospitals are prone to fail at educating Black women about lactation matters.

This study, published by the Centers for Disease Control and Prevention found that “in neighborhoods where the Black population is higher than average (above 12.2 percent) key practices that support breastfeeding are much less common. The biggest difference in practices included hospital efforts to initiate early breastfeeding, limited use of infant formula and rooming-in (keeping the mother and baby in the same room).”

I can’t understand my most-needed support people telling me these things that Ashley Russell says (especially) Black women are usually told by other black women, as a means to encourage abandonment of breastfeeding:

“1. ‘You’re going to spoil that baby. And I’m not keeping him when you go to work if he is spoiled!’
2. ‘They are always hungry. You’re not going to make enough milk, because I didn’t.’
3. ‘Mine slept through the night at 1 month old because I put cereal in his bottle. Your baby’s going to want to eat at night and won’t sleep.’
4. ‘It hurt.’
5. ‘That’s perverted to let a baby suck on your nipple.’
6. ‘It’s easier/quicker to make a bottle.'”

I can’t understand seeing mostly a different race of breastfeeding mothers depicted in lactation guides and brochures, then wondering why members of my own race are less likely to demonstrate the act where anyone else can take witness.

In areas called “First Food deserts” which are historically and still highly populated with Black families, more than half of community members claim they wouldn’t feel comfortable seeing public breastfeeding.

In the film The African American Breastfeeding Project, Jasmine, from Compton, C.A. said:

“A lot of the images you see are not women that I could connect with. They’re white Americans, modern white Americans, or they’re African Americans but they’re dated, a lot of dated images. Not seeing women breastfeeding, not knowing what normal breastfeeding behavior looks like is really detrimental for women [who] want to breastfeed.”

Remember the controversy embroiling the young African American woman named Karlesha Thurman, otherwise known as “The Breastfeeding Graduate”? Amazingly, most of the slurs used against her for sharing the photo were chiefly racist and had little to do with breastfeeding, more with the supposed shame she brought upon her Black community for her choice in “trashy/ratchet exhibitionism.”

By contrast, media showered a white breastfeeding graduate with positive descriptors like “Adorable!” in the headlines following her own photo publicized just months later.

Some non-Blacks might understand what it’s like to wade through a few of these issues but we can never know the difference it makes to be a Black woman in the same situation. So I think we all need to really hear your stories.

I support you, Black breastfeeders, in wanting and needing to overcome anything (common or extraordinary) to meet your feeding goals.

Black Breastfeeding Week is good for all of us so please — celebrate, lactate, educate loudly and proudly this week and beyond!

I’m toasting my own cherished breast milk to the beautiful, inspiring bounty of yours.

Guide to Breastfeeding for African-American Women