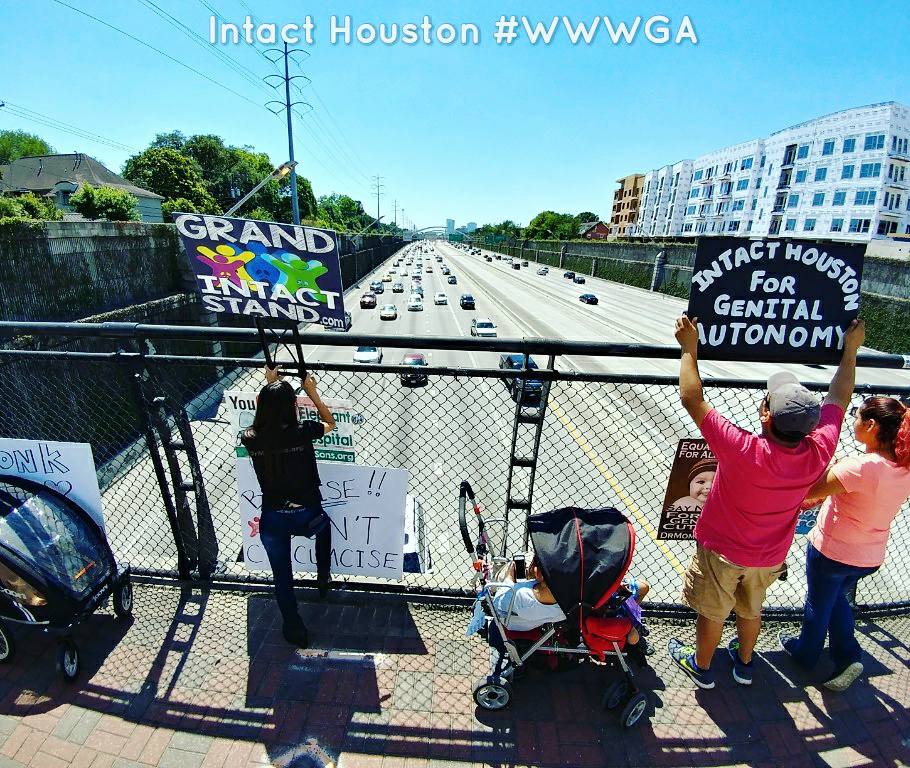 A white truck slowed as it rolled by. The same driver swung back around three more times, honking with each pass. This was no coincidence or deja vu.

One of us carried an oversized white posterboard with the words “Honk if you ❤ foreskin” drawn across both sides.

The other eight of us fulfilled some task related to our cause — hoisting other signs, hauling info cards and materials to distribute, capturing the proceedings on camera, or merely accompanying for purpose of solidarity or, in the case of one individual, by chance meeting. 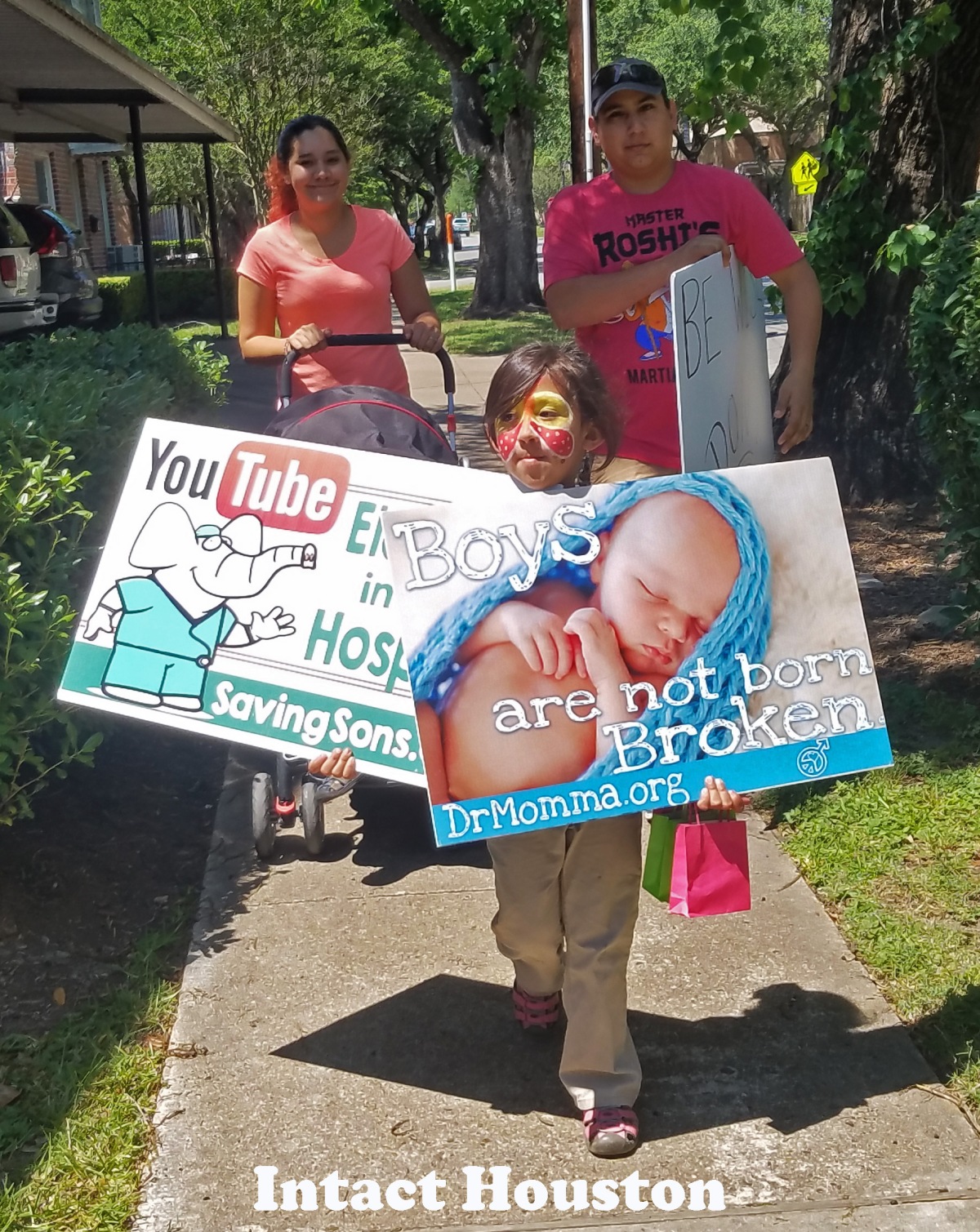 We lost count of the honks (and peace signs and thumbs up).

Ten lanes of city traffic slowed down to read our signs, five eastbound and five westbound, plus two crossing the bridge.

Before our demonstration on Graustark bridge, we met at Menil Park, known to be one of the most popular picnicking locations in Greater Houston.

We intended to ‘take a stand’ at 2 p.m. sharp in celebration of the first annual Grand Intact Stand on the closing weekend of Worldwide Week of Genital Autonomy. All participants nationwide would be counted for a grand tally.

It’s much like The Big Latch On where mothers gather not only to normalize breastfeeding in general, but to set a record. To put it on the books, making their position official.

So we were part of the inaugural count for normalizing genital autonomy. (Genital autonomy protects personal choice — the owner of the body should get to decide what they want to do with it without unnecessary medical, cultural, religious, or sex/gender bias). 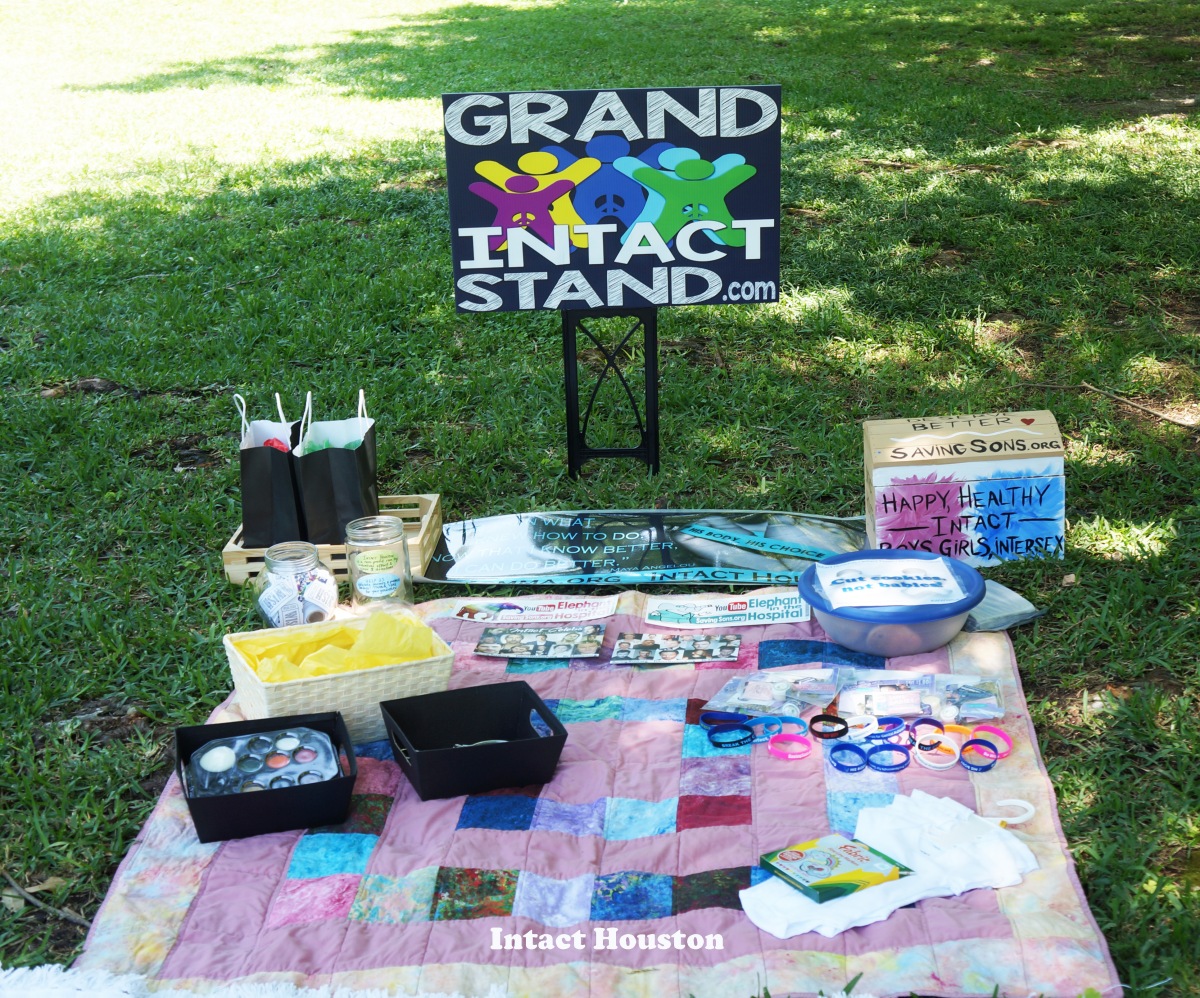 By 2 p.m., a tiny group we were: two full families and a restoration advocate who we came across in the park by fateful happenstance. (You could say our signs picked him up).

All of us had been touched by the genital autonomy cause in very personal ways, though we varied in age, gender, ethnicity, and certainly a multitude of other less conspicuous qualities.

I understand real-life activism isn’t every genital autonomy advocate’s bag, but it’s admittedly disheartening when we fail to get all hands on deck.

I only wish other advocates understood the great impact made by simply showing up to events. Changing just one person’s life in turn changes so many others. We often see this ripple effect happen right before our eyes, then something happens to any discouragement we feel whenever we find ourselves nearly alone in this good fight: it’s replaced with fresh, energizing motivation.

We hoped to make the official count, well, count.

Just beyond our claimed picnic spot, a young man was reading a book in the shade of a neighboring tree. He shouted over to us, “You guys rock!”

He said he’d just Googled the links on our signs and realized what our cause was about.

“I’m ALL about that!” he said. Not only was he already restoring his foreskin, but he has a heart for promoting the genital autonomy cause. 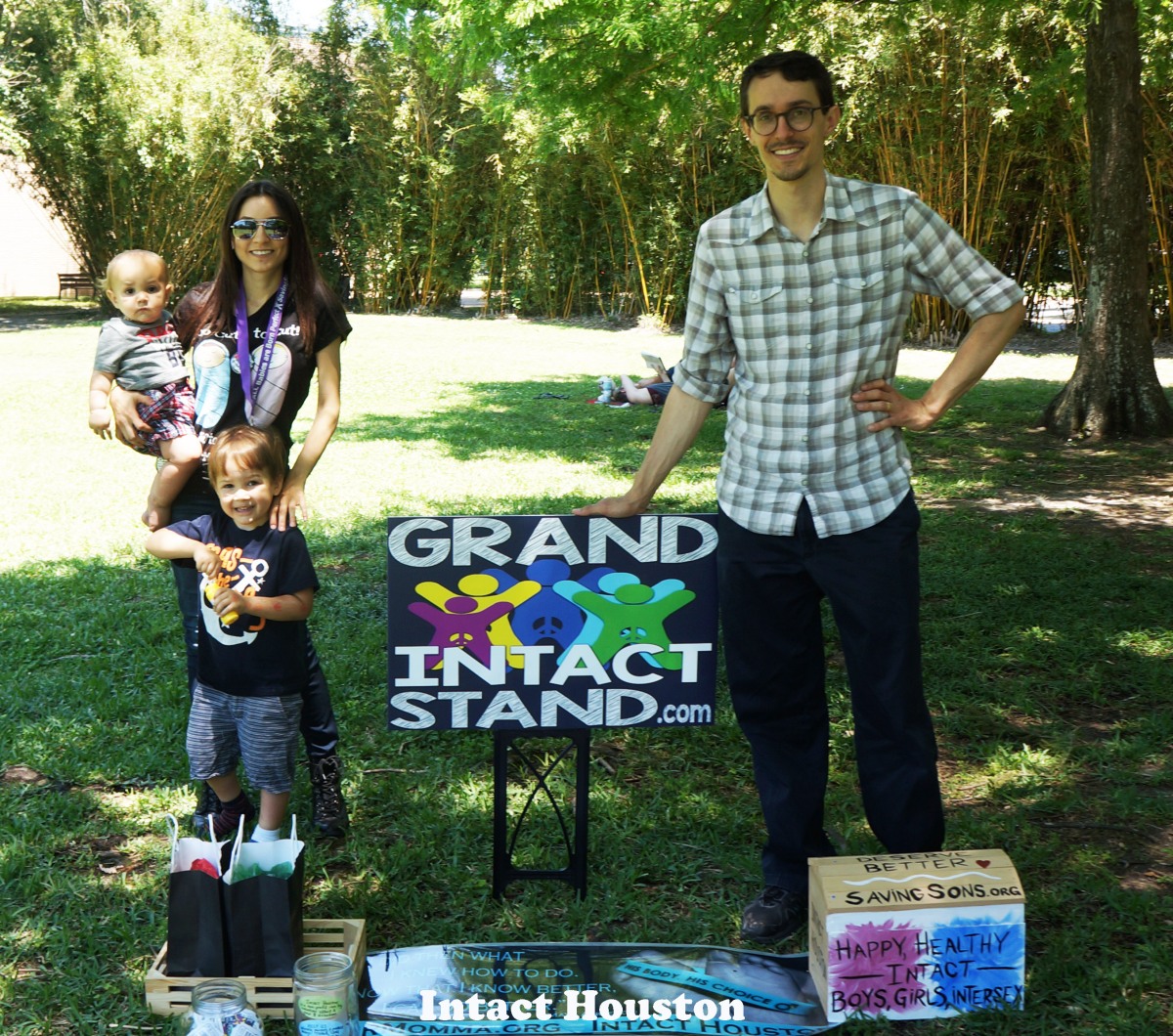 Of course it’s wonderful to connect with like-minded individuals within our community. It’s always eye-opening to learn what compelled each person to not only see the light but also to start speaking up. It’s interesting to hear what they consider to be effective forms of advocacy, too.

Still, our local events aren’t primarily for existing advocates. At least I don’t see it that way. I’m not just looking to preach to the choir and gather friends for a back-patting fest. I don’t show up to an event expecting to hear only agreement.

I wait for the dissenters. I look for who isn’t honking or brandishing peace signs.

So the majority of our informational materials went to curious onlookers, and our signs were strategically placed for the benefit of passersby.

Many passersby made comments among each other about our signs. Many were supportive, though one person did say, “That’s horrible!” (referencing our public pro-intact message, not circumcision).

“I have my foreskin and I love it!” said another.

An Indian woman and her two elementary school aged daughters stopped by. She accepted a goodie bag full of info cards, which she read to herself, and to her daughters she pointed out a sign with a baby on it. No words, just a smile.

A young man and woman noticed one of our signs from their tree hammock. It read: “Europe has more foreskin, fewer UTIs, fewer STIs, less penile cancer.”

The man asked me about it, saying he’d been thinking about getting circumcised. I asked why. He said because he thought it’d prevent him from getting a sexually transmitted infection.

He and his female companion seemed both relieved and surprised by my response, which I explained in further detail. (Bottom line is, amputative surgery as a prophylactic measure against a common and easily treatable issue is illogical; condoms are the only effective prevention for STIs; and the American Cancer Society emphasizes that circumcision should never be recommended for penile cancer prevention).

“I thought it would be better…” he said.

His companion made a face, raised her eyebrows, and expressed gentle discouragement against such a drastic decision.

“Don’t do it!” our new book-reading friend opined from several yards away.

I mentioned how thousands of circumcised men are restoring their foreskin.

“Yeah, that’s what he was just telling us…” the man in the hammock said.

I explained how intact sex is more comfortable for both partners. He looked at his partner and said, “I don’t know… is that true?”

She refused to answer aloud but smirked with subtle confirmation.

I handed him an Elephant in the Hospital sticker and he said, “Thanks, I’m going to watch this right now.” 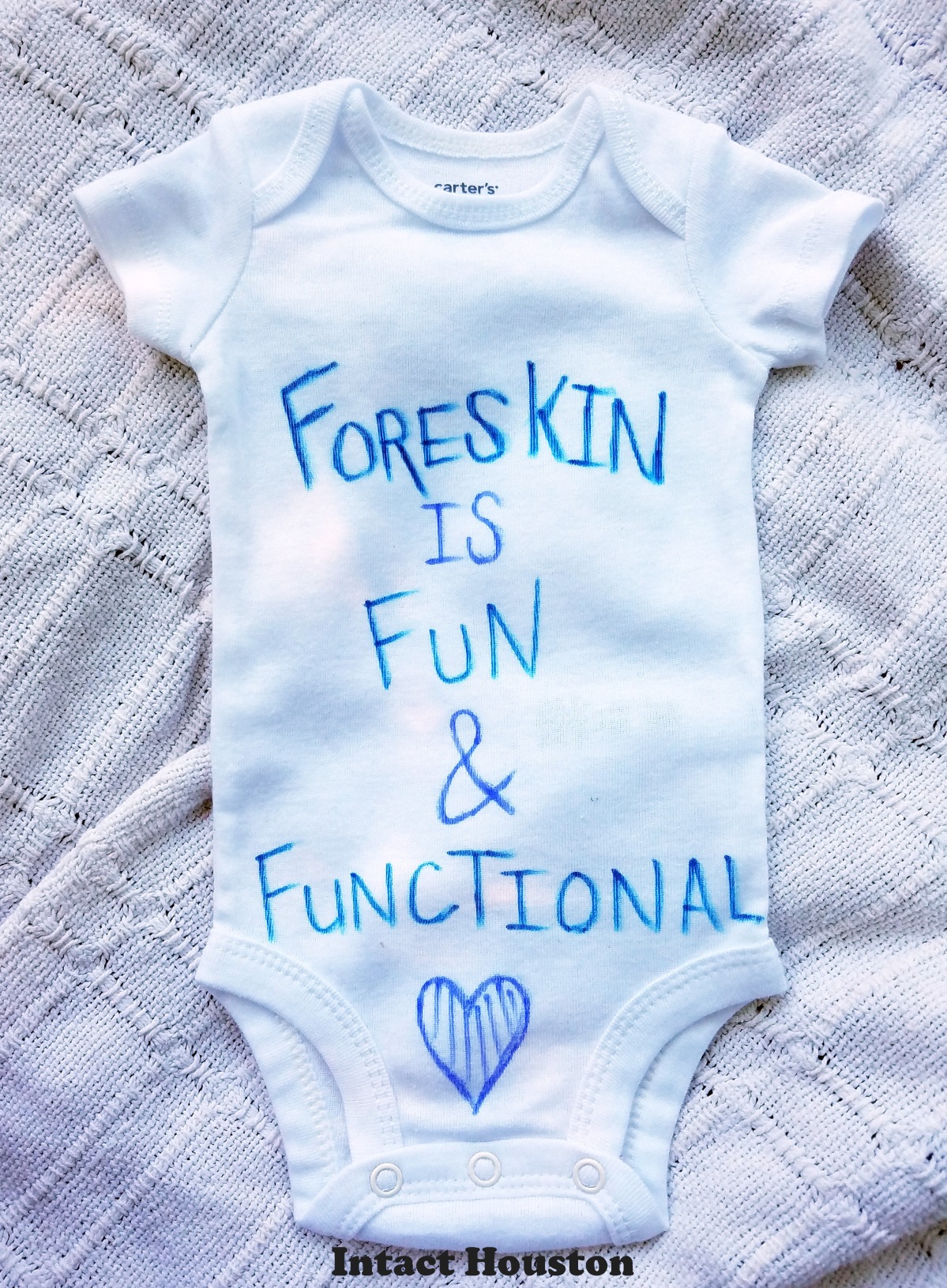 You see, one person taking a stand is enough if the position is worthwhile.

Any one person in our little group could’ve distributed materials in the park alone, held an oversized sign on the bridge alone, or decorated a onesie for the traveling Genital Autonomy Clothesline alone…

But we weren’t alone!

Groups in fifteen locations across the nation took a stand with us. At parks, national monuments and Capitols, malls, restaurants, maybe next year in a box with a fox or a house with a mouse… 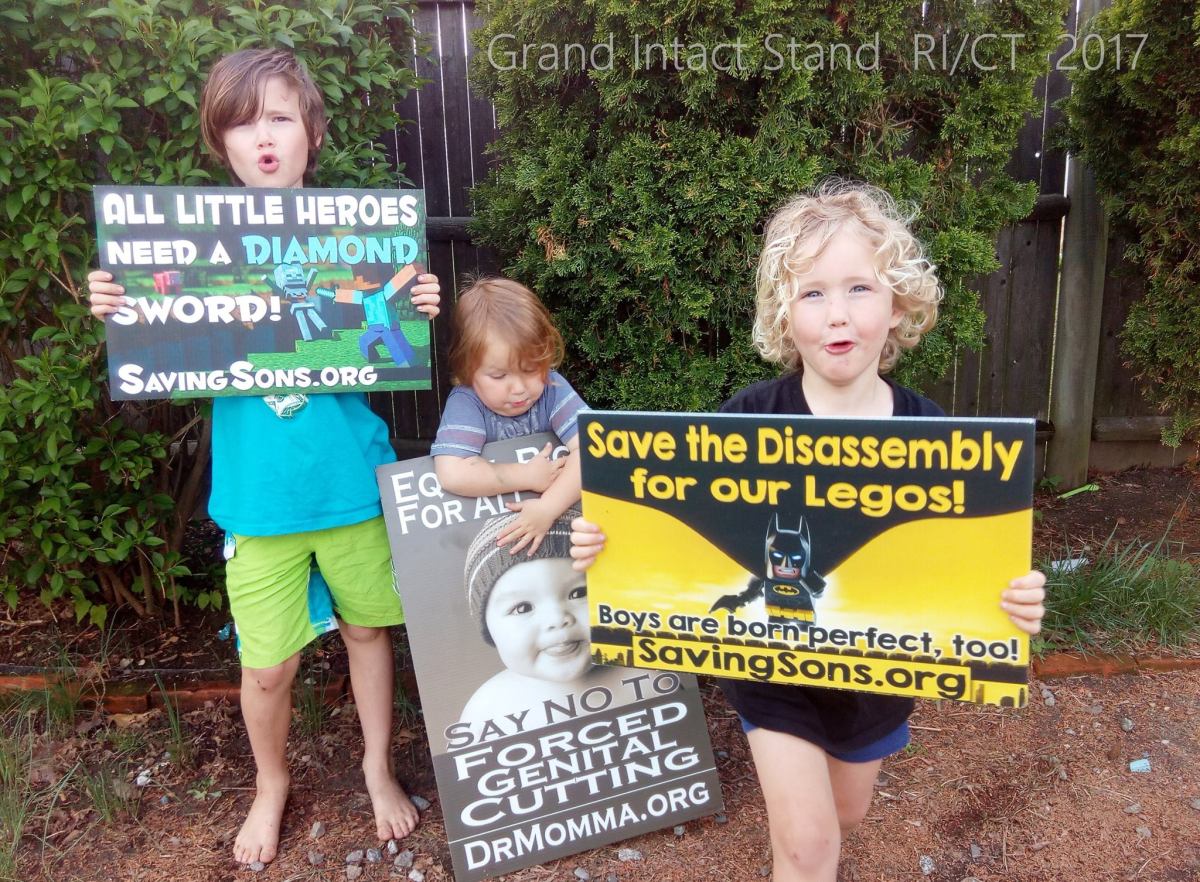 The only thing actually required to take a stand?

A fearful voice, shaking and self-conscious in a vacuum of quiet, or a confident voice emboldened by countless others who are willing to fight the good fight, too.

It only takes one voice to speak up when something worthwhile needs to be said.

Image via Saving Our Sons 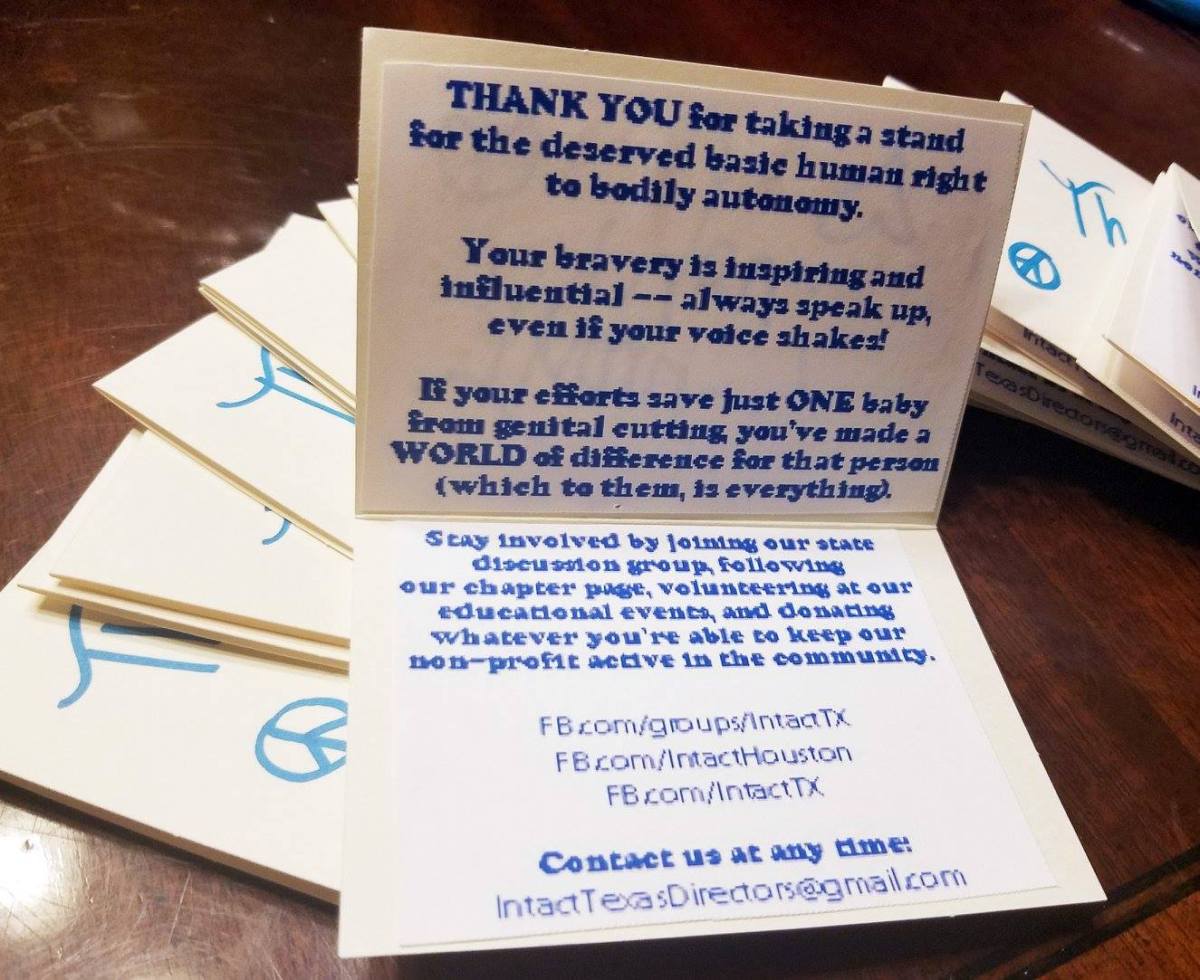 To those across the nation who took a stand this weekend:

THANK YOU for taking a stand for the deserved basic human right to bodily autonomy.

Your bravery is inspiring and influential — always speak up, even if your voice shakes! If your efforts save just ONE baby from genital cutting, you’ve made a WORLD of difference for that person (which to them, is everything).

CHECK OUT MORE ABOUT THIS EVENT: