Handing out penis balloons, wilting in the heat, remembering the victims in the recent Orlando tragedy, spreading positive messages about foreskin… this was my experience of Houston’s PRIDE Festival this weekend.

“Have you gotten these cards yet?” I asked a young trio as I put a few info cards and free condoms in their hands.

I knew they hadn’t, but it broke the ice. Then I asked if they had kids. I believe it can cause offense to assume someone is ‘too young’ to have kids, because unless you met them playing hopscotch at elementary school recess,  they’re probably not too young, technically speaking. The girl said no, but she did have a little brother. She didn’t actually know if he was circumcised or not.

I asked if she’d given any thought to circumcision and she said no, not really, but she heard it could cause infection. I assumed she was confused and was referring to the myth of foreskin’s connection to diseases. So I explained how forced premature retraction is a known cause of infections rather than foreskin itself, and the risk of infection after circumcision is very real (potential contraction of staph in the hospital, and the ease of infection given this open wound entrapped in a urine- and feces-filled diaper).

She said it did make sense that foreskin is meant to be protective of the penis, and she didn’t think that should be taken away from children. 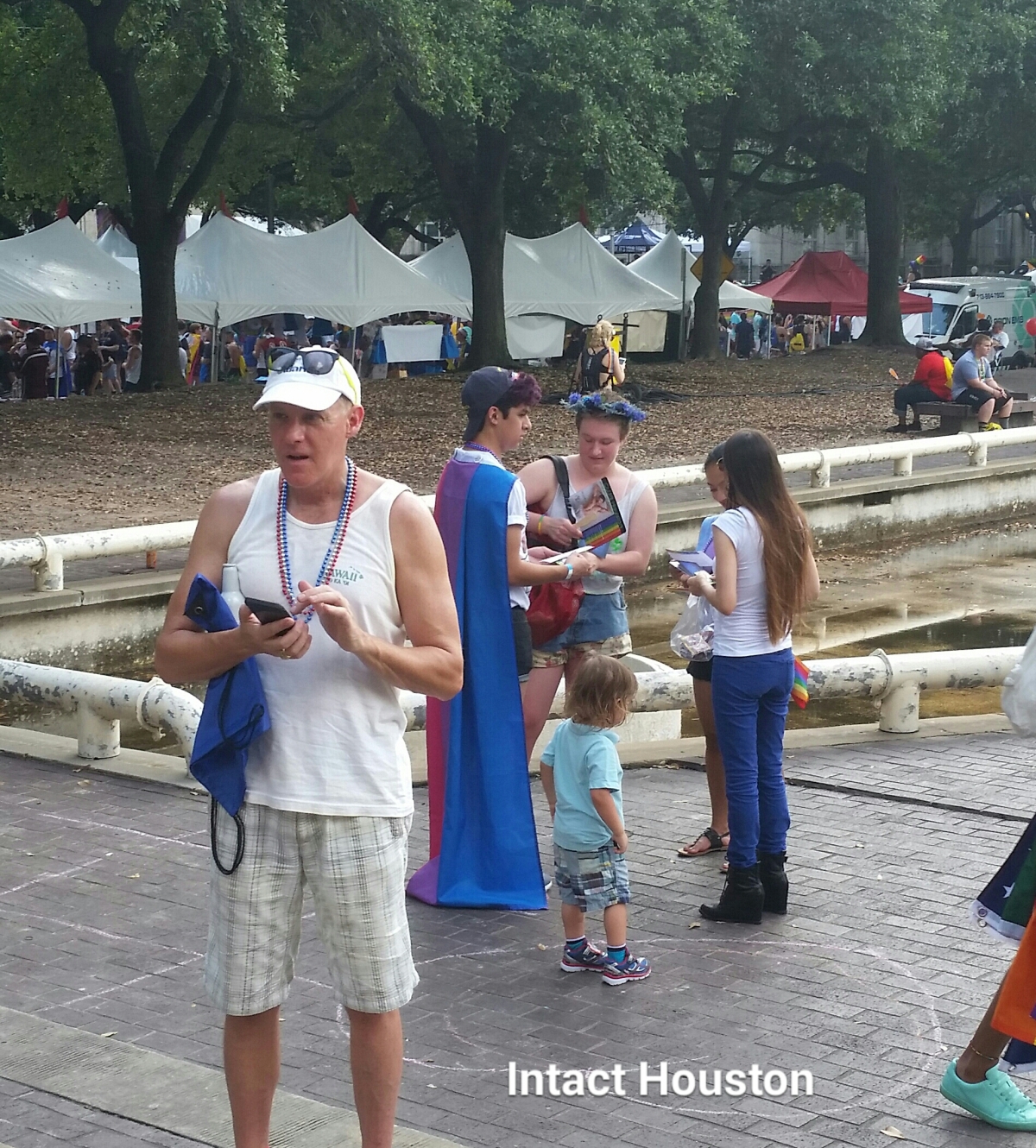 The boys in the group seemed to  think I was an official advertiser or affiliate with PRIDE because one of them complimented the eye-catching nature of our cards and freebie condoms while also giving me credit for other PRIDE organization giveaways. I clarified that I was here on behalf of Intact Houston and Saving Our Sons, to which he said, “Well you definitely got our attention!” 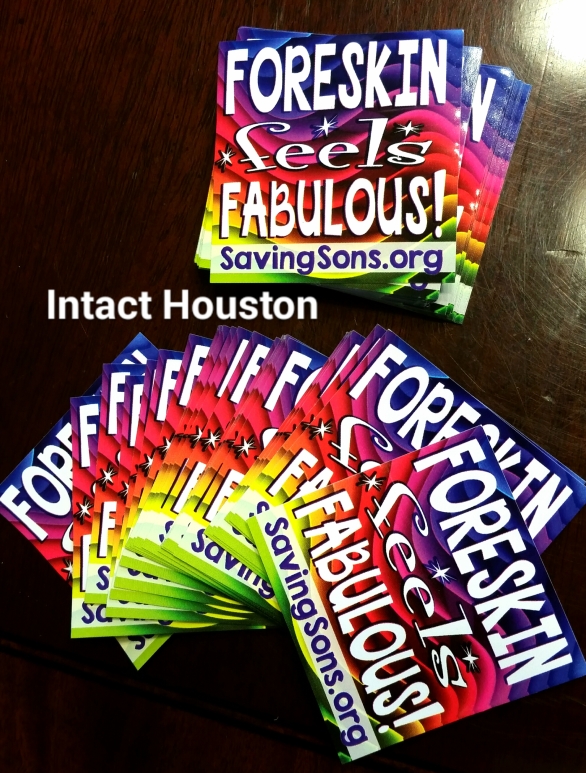 I approached a trio of young women later on. One said she had boys who were all circumcised. I asked if she wouldn’t mind telling me why she opted to have them circumcised.  She gave me a sheepish look.

“I don’t know.” She admitted she’d never even thought about it.

I explained how we were here to open people’s minds about circumcision as a human rights issue, to encourage body positivity for all (by blasting the undeserved cultural shame of foreskin and empowering circumcised men to take back what they lost through restoration), and to support regret parents in their journey toward acknowledgment and forgiveness. She thanked me and said she’d look at the web sites later. 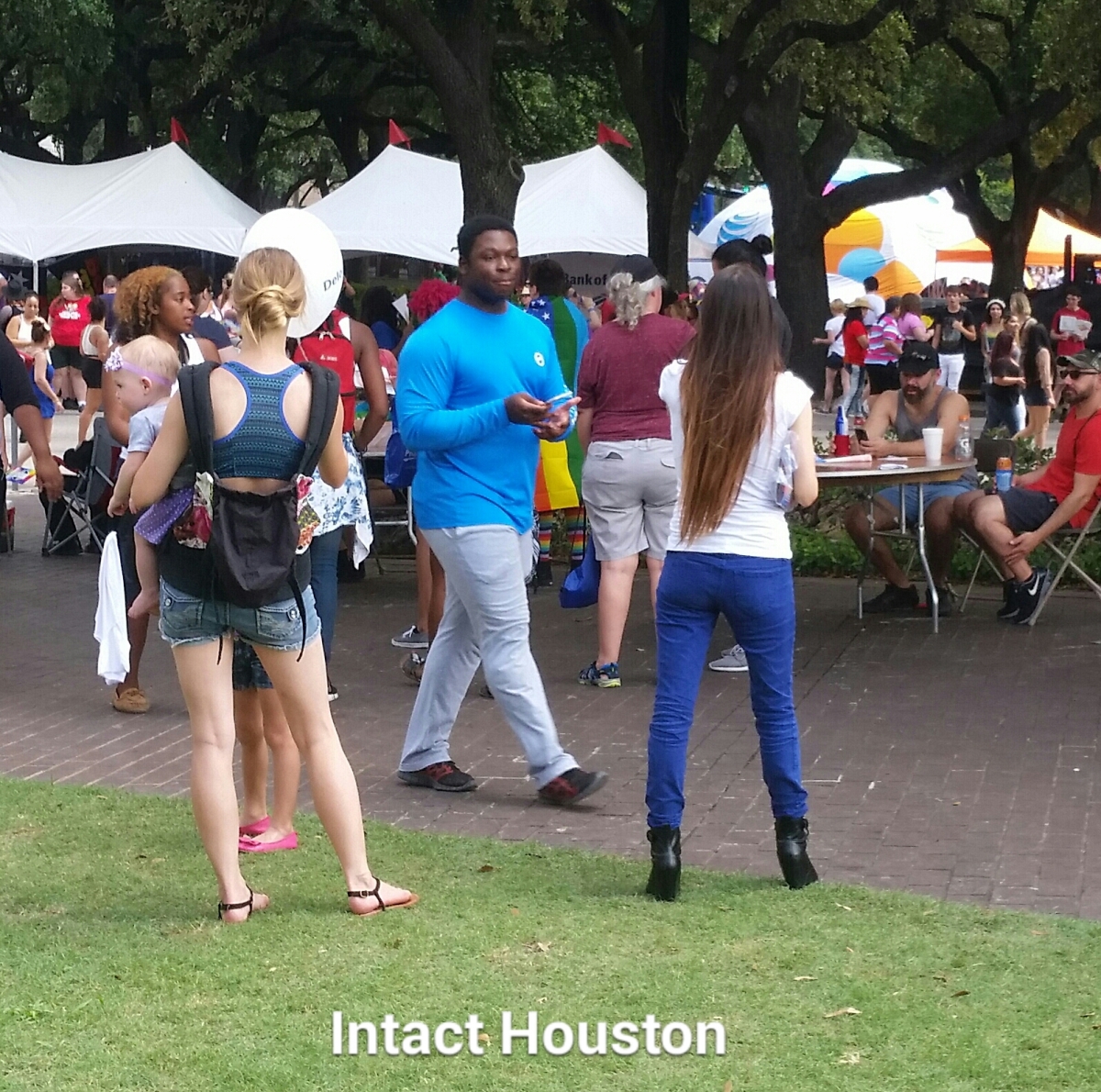 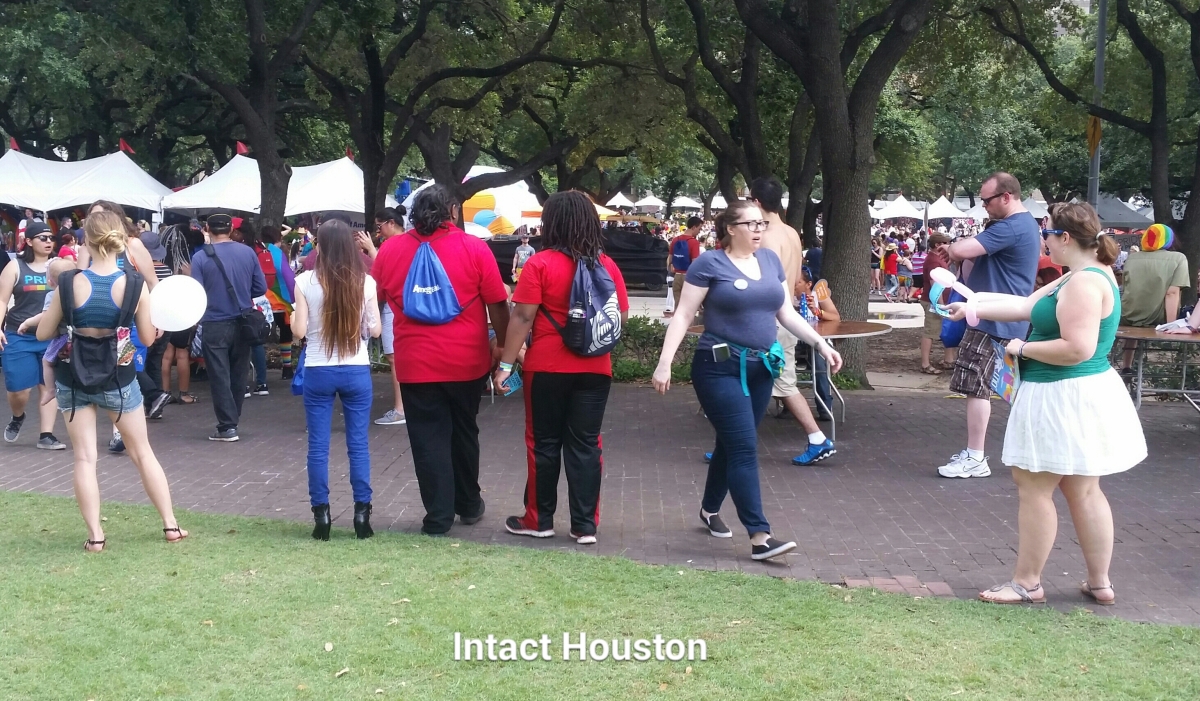 I was so happy to finally meet Intact Houston’s newest co-director Abbie in person. Her husband Travis accompanied her, and several other intact advocates stopped by to help distribute cards. 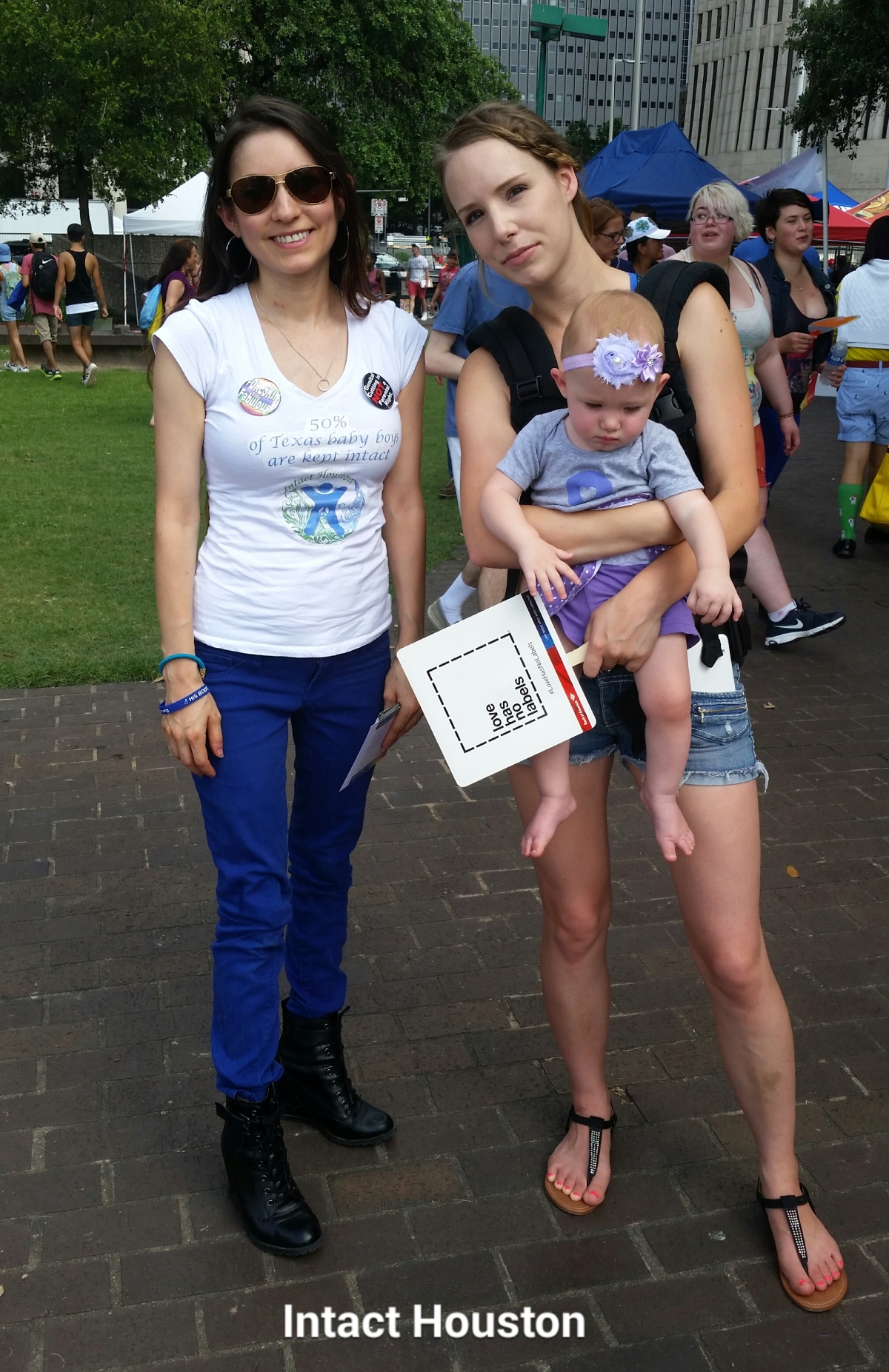 “A lot of people seemed really receptive and appeared to be reading the cards with interest, so that made me feel good,” Abbie said about her experience. “Everyone seemed to be in really good spirits and the conversations I had were lighthearted, more about restoration and functions of the foreskin than the horror of RIC.”

We had originally planned to give out stickered water bottles but were told at the last minute they weren’t allowed in the venue.

So instead, a bit of an impromptu alternative… free penis balloons! (Know your audience, right?). Eric and Travis were on balloon-pumping/twisting duty. They also made some balloon female genitalia to keep things fair. I put SavingSons.org stickers on the first few balloons. 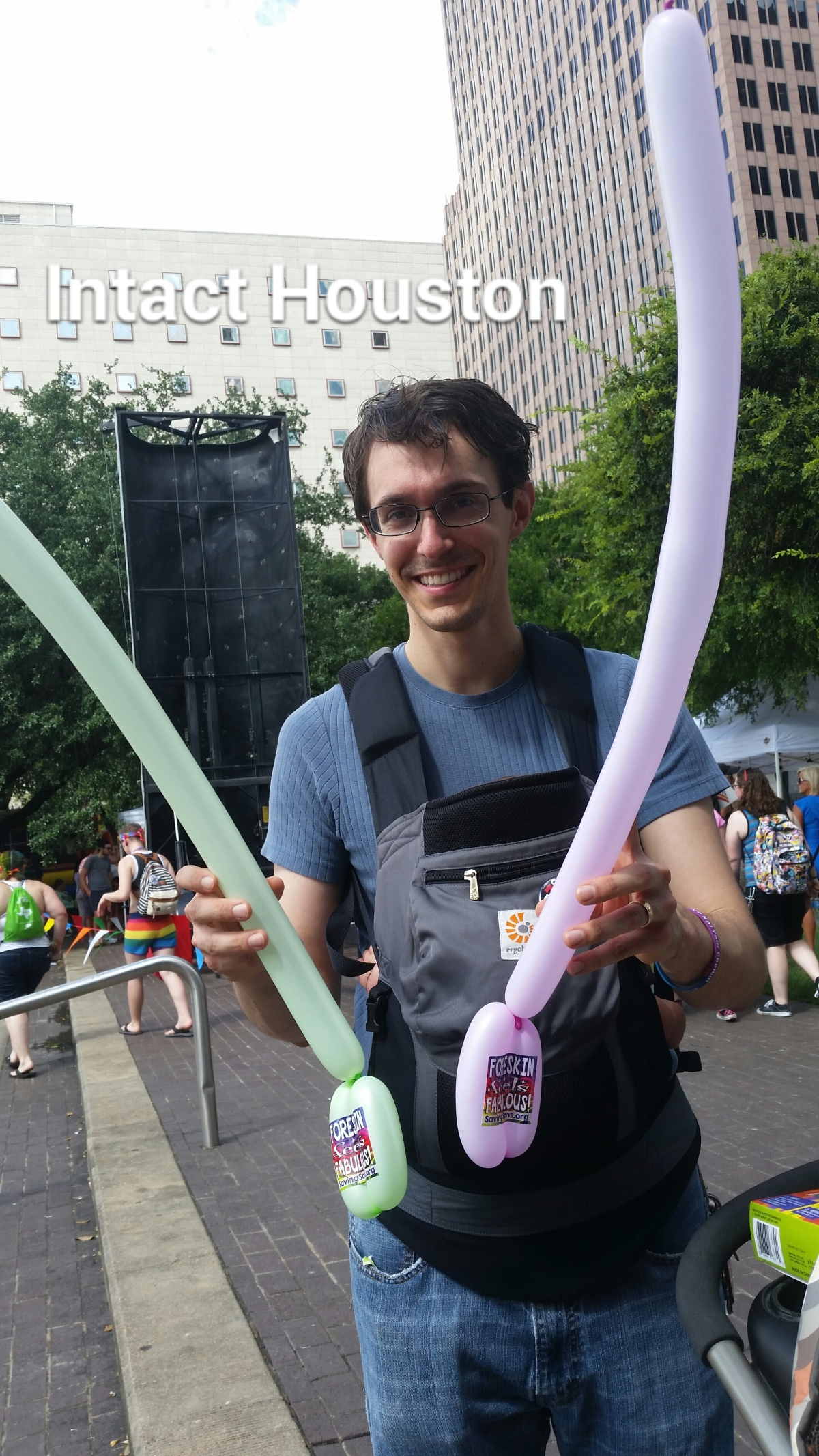 Unfortunately, I lost my specially designated sticker pouch shortly thereafter, so we ended up just handing out balloons with cards stuck inside the gaps.

Whether ridiculous and vulgar or fun and creative, they were a hit anyhow! It seemed our offering of these balloons and cards were far more often met with gratitude than attitude. 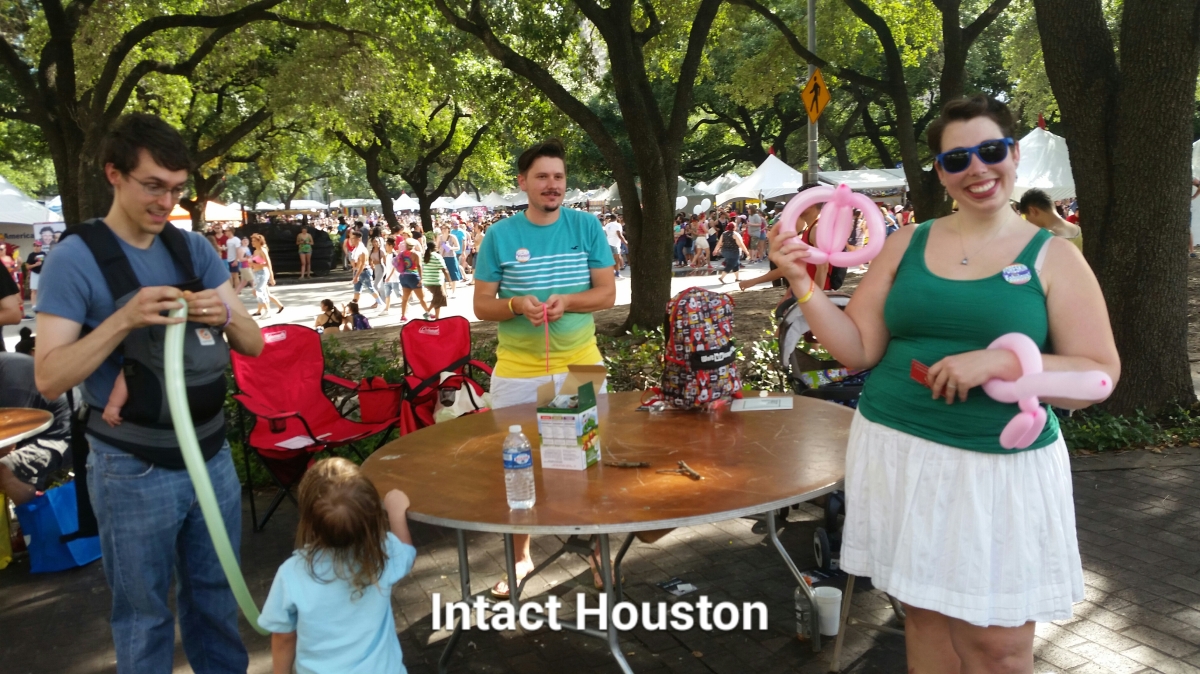 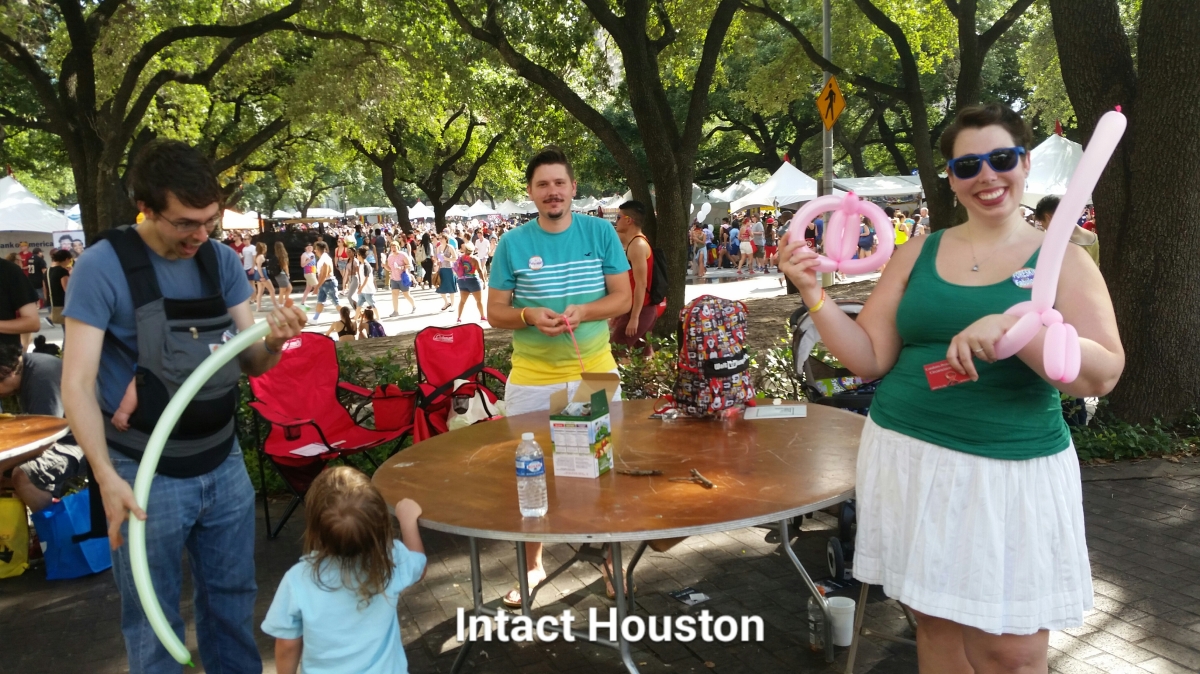 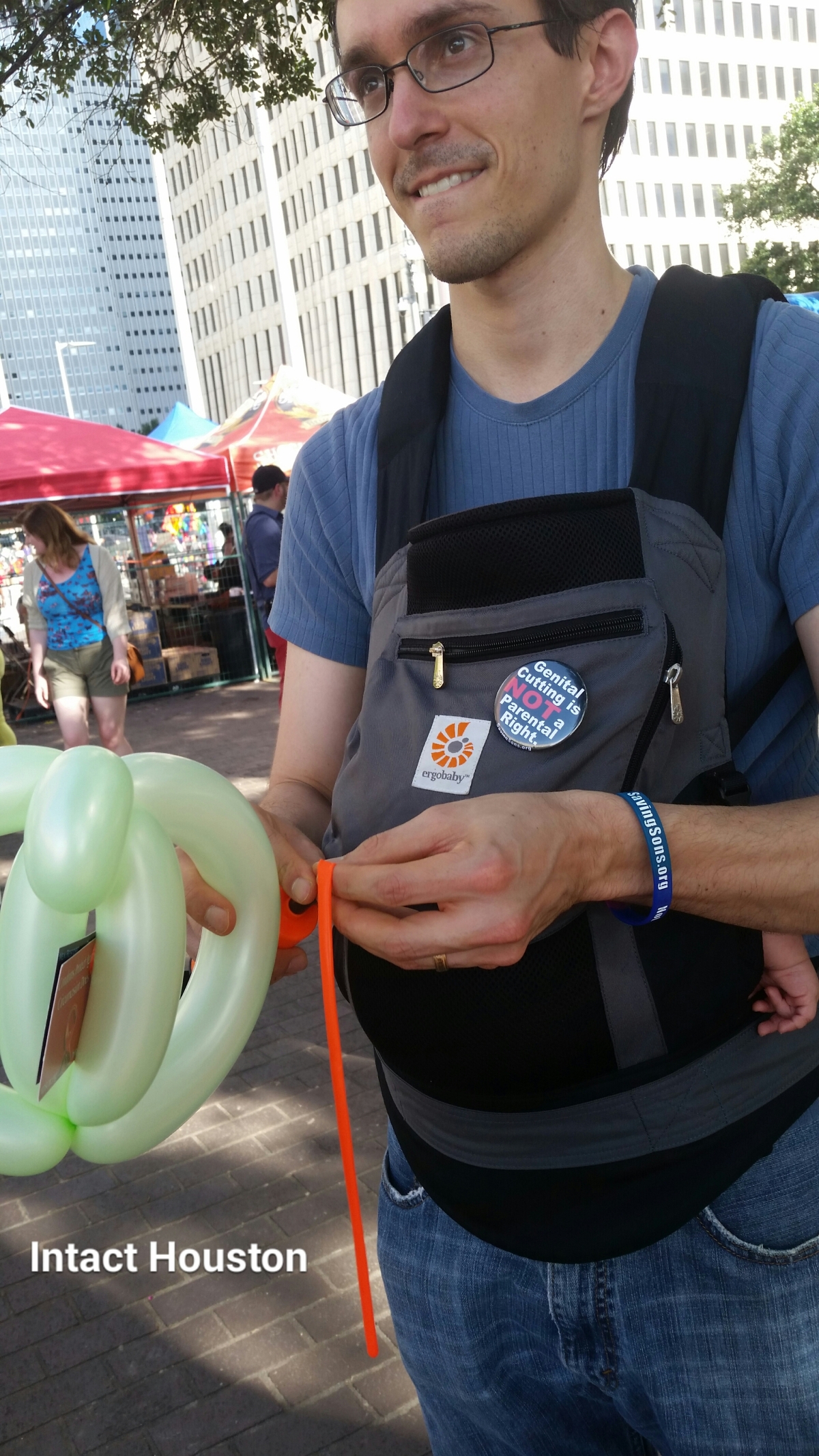 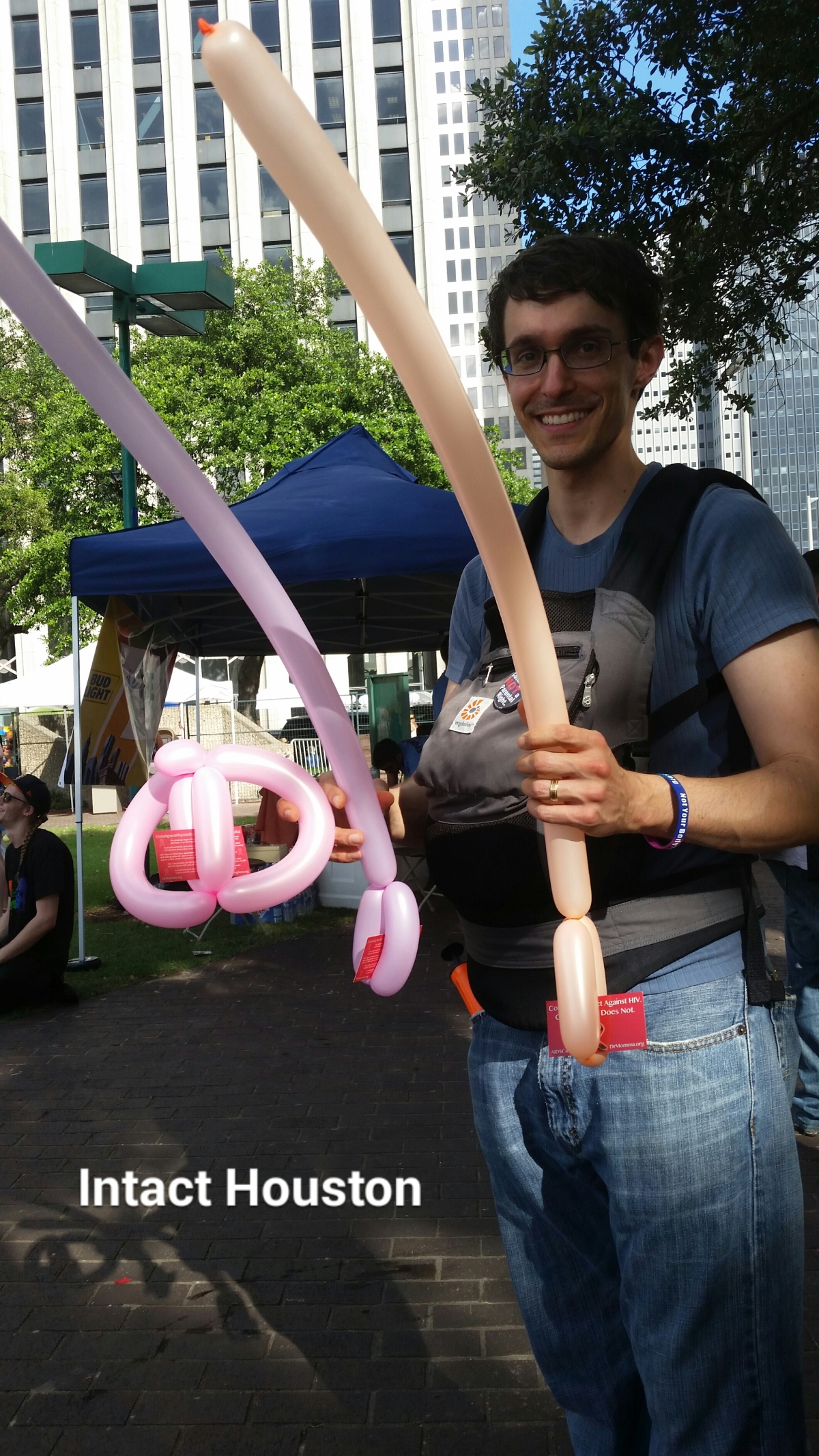 Julep was asleep in his carrier up until the end of our shift here. As we enjoyed a nursing break in the shade, we overheard a woman say, “Aww look, she’s feeding her baby!” ❤ 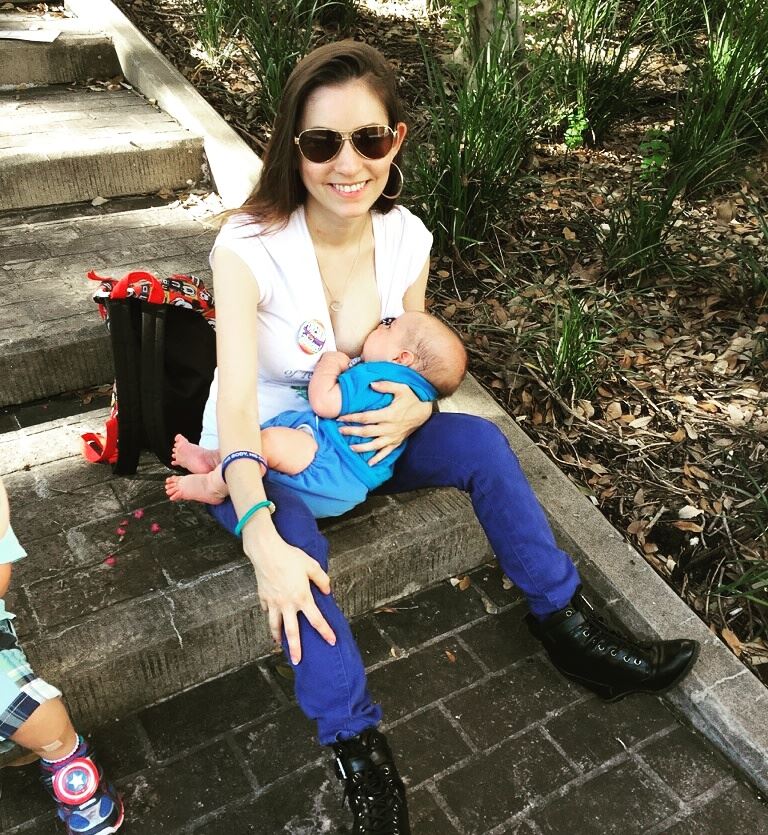