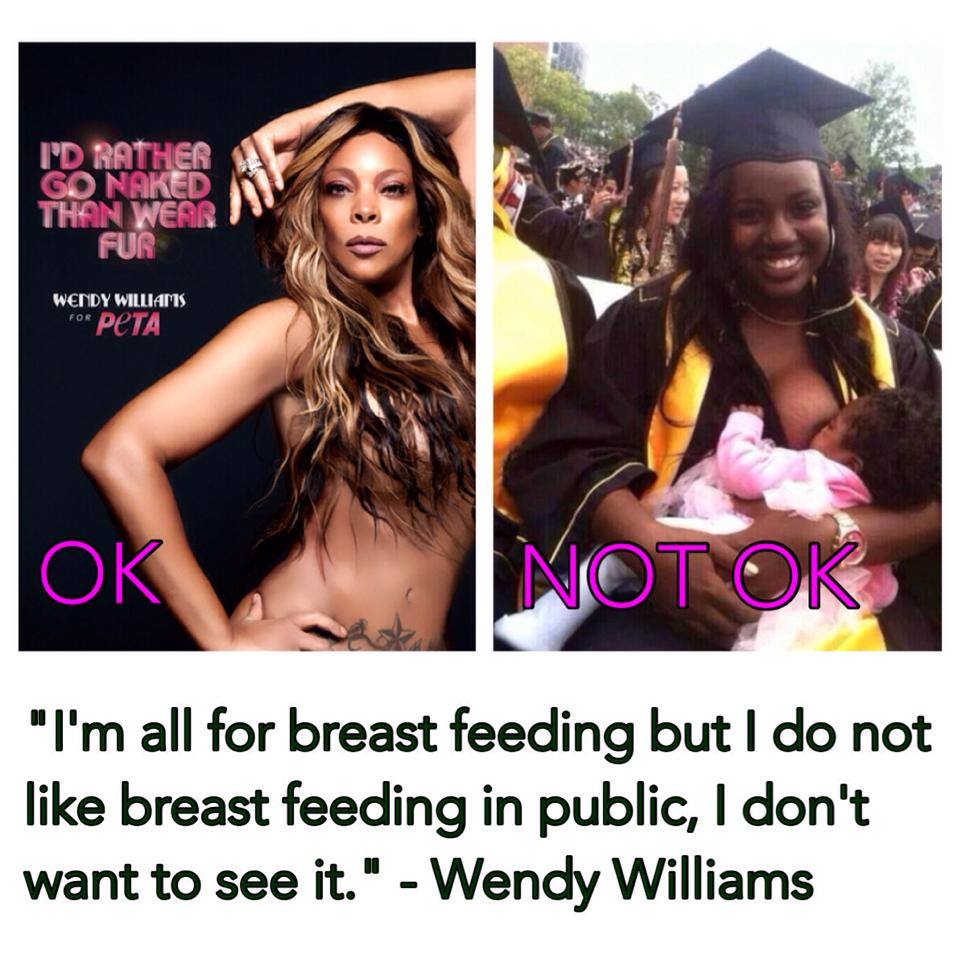 Did this really happen?!

What the hell is wrong with these people? Come on guys, I even had to tag “bitches” in this post. This is for real stuff. Worst of all, the audience APPLAUSE is most deafening!

Wendy says she does not want to see breastfeeding in public (newsflash: you don’t have to look). Yet she willingly and proudly posed naked for a public PETA ad. Pretty sure no one asked to see her bare armpits and stomach and hips either. Not trying to be rude… just sayin’. No one asked to see it. Certainly not a baby whose survival and happiness depends on her exposure of hypocrisy.

In the following video segment, Luenell claims she’s fine with feeding the baby, but doesn’t think it’s appropriate to share the moment in a photo (is she really all that “fine” with breastfeeding then?).

Joe Levy is the only one who seems to have his head on straight. Ironic that it takes a man to protect a young, accomplished woman from a panel of catty, fearful women who refuse to allow any sort of power or pride to those who parent differently from them. Wendy herself breastfed for two weeks. You won’t read jack shit from me about my opinion of her parenting choice.

What I actually care about and feel like mothers in general have a right to comment upon is… the bullying!

Watch Wendy Williams — who I mentioned had breastfed her own baby for two weeks — discuss her thoughts on the breastfeeding graduate with her Hot Talk panel starting at 04:35. And essentially, her stance against mothers and babies (yes, if we shred it away to the marrow, that’s where we end up).

Though Wendy’s audience seemed to approve of her remarks, not everyone is so amused. A nurse-in took place this morning outside her studio thanks to Milkies in Manhattan.

One of the organizers of the nurse-in wrote this on the Facebook event page:

“On today’s Wendy Williams show (air date 6/12/14), Ms. Williams took it upon herself to once again publicly shame a breast feeding mother. This is more than a breast feeding issue, this is a women’s rights issue. Breastfeeding in public is legal in all 50 states. In an effort to normalize breast feeding (as it is how nature intended a baby to be fed), we stand together to ask Wendy Williams to publicly apologize for attempting to humiliate Karlesha Thurman, the 25 year old mother who breastfed her daughter at her college graduation.

Instead of taking that powerful image to promote a woman’s independence and power, Mrs. Williams instead decided to ridicule Ms. Thurman by saying she should have left her baby home or should have found a stall somewhere to feed her. When public figures, such as Mrs. Williams use their platform for such negative attacks, they help perpetuate the stigma that breastfeeding has in this country. This isn’t a “breast is best” argument, it’s a “breast is normal” argument. Breastfeeding is normal and natural. It shouldn’t be stigmatized and a woman should never be shamed into hiding in a bathroom stall to feed her child.

A woman’s rights to feed her child however she wishes, be it breast or bottle, has to be respected. Our mission is to normalize breastfeeding and to respect a woman’s right to feed her child without being stigmatized or ridiculed. Please come to support our mission. We are your mothers, wives, daughters, nieces, aunts, friends and we need your support. Thank you.

With the support of:

No one cares if you’re personally offended by breastfeeding. It’s your head space and you can swim in it all you want.

However, predetermining a shock-value plot line with a prearranged panel to rile up your audience seat-fillers against a proud mother who’s actually a POSITIVE ROLE MODEL for girls AND boys is, itself, wrong. It is more hurtful than you realize to the confidence of new mothers all over the country who witness the aggressive reactions to these sensationalized stories and are cornered into giving up on what they were trying so hard to give their babies.