Three years ago, I was 8 months pregnant and searching at the last minute for a bump-friendly Halloween costume. Something affordable, not too tight, not too scary… At the 13th hour we came up with our winning idea: I would be “PregNUNt” (a knocked-up nun) and The Designated Dad joined me as “Our Holy Father-To-Be.”

I haven’t yet decided how I’ll dress up this year as an expecting mom again, but I’ve already started gathering inspiration. Here are a few ideas I really like. (Also don’t miss Part Two of this post series):

Teats, udders, nipples — all mammals have ’em, even you! Now’s the time for Halloweening… you can think about that other kind of weaning much later. 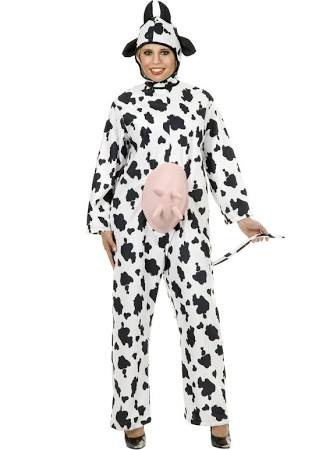 An older sibling can wear a shirt that says “Bear Cub,” and for dad, “Papa Bear.” Other ideas: don a bear hat or mask, and dangle a rubber trout from your mouth. Whatever you do, make sure everyone knows you don’t mess with mama bear!

A taste of the “Mom-supial” life. 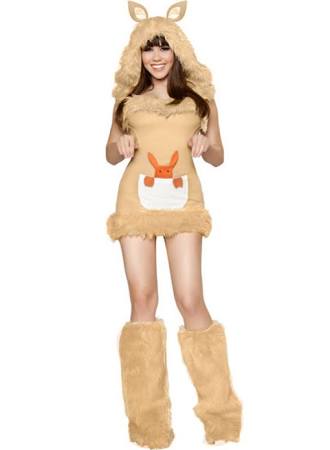 A good way to hint that your baby’s name is Robin.

Finally, an excuse to act nutty during pregnancy…

You can get these clothes for cheap at Salvation Army, but you know they’re already hiding somewhere in the depths of your closet.

Pocahontas from the Disney’s Pocahontas

Name change: “Prega-hontas.” Even better if you’re expecting multiples because then you can spend the night singing “Colors of the Twins.”

If only pregnancy were as quick for all mamas as it was for Bella…The most important question: Will your baby’s father be Team Edward or Team Jacob?

Just might prepare you for the island of isolation that is often new motherhood. Ah, on a positive note, your partner gets to yell “Wiiiiiiillllsoooonnnn!” all night. And you get to bob around in total silence (read: peace).

Jessica was feeling fancy enough to use what appears to be some fancy eyelet fabric for her mummy costume. But we both know value-size paper towels will do just fine.

We all know “I Forgot to Remember to Forget” is basically a song about pregnancy brain. Also name change: “Elvis Preg-ley”?

Hormones have turned you into an emotional trainwreck. Let Miley help you express your pregnancy woes with the force of a thousand twerks.

If you must stay sober for nine months, at least you can pretend-live vicariously through your sloppy redneck alter ego. I had to post a bunch because.. genius.

They got one shot… and nailed it. Happily ever after!

What could be luckier than your golden child at the end of a rainbow?

Name change: Little “Preg” Riding Hood. Yes, all the food in that basket is for her. Don’t bother asking to share because #StraightOuttaCravings.

When You Need An Easy Cliche Everyone Will “Get”

Because pregnant mamas are super saucy! Bun in the Oven

This can only mean one thing…

Cooking up a person… but not to eat! Or to garnish! Weirdos… Please, just don’t make your partner wear something that says “I Had The Secret Ingredient.”

Elicit the help of two friends for this, or simply wear a shirt that says “Ice Ice” above your belly.

When Involving Other Siblings Check out Part Two of this post series where you’ll find out about:

How to disguise the bump if you want to pretend you’re not pregnant for like, one night please…

Ideas for nerds and acquired tastes…

And how to celebrate if you’re too tired for all this crafty sh*t!